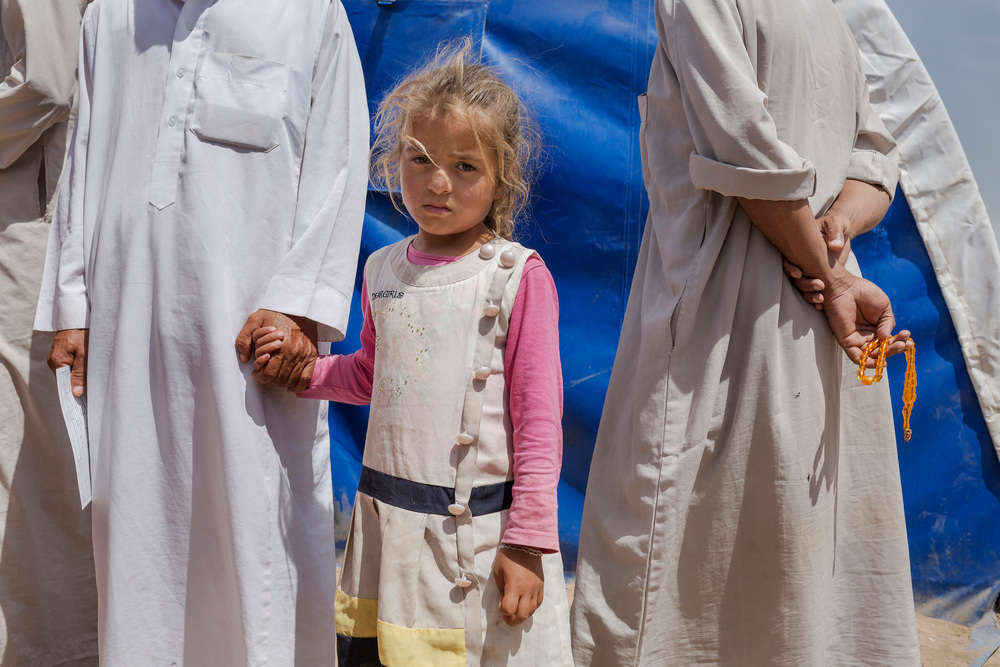 “By the end, we were eating grass”

“We had to leave. We had no choice,” says Kareema. “By the end, we were eating grass.”  Kareema’s four-years-old niece, Rojain, sits at her side in a pink dress, listening attentively. Kareema is one of many thousands of civilians who have risked their lives in recent months to escape West Mosul.

The western side of the city, on the right bank of the Tigris river, has been ravaged by relentless fighting since the Iraqi forces moved in to recapture it from the Islamic State group in February. Kareema now lives in east Mosul, staying with a relative who works for in Al Taheel hospital, opened by MSF in March to provide surgical and emergency care.

Kareema used to work as a teacher while her husband, Said, took up occasional jobs as a labourer. Today the thought of a job - any job –seems like a dream – for Kareema and many others in the city. The past few months have been all about survival – by any means.

“By the end, I’m not exaggerating, we were eating grass. Not just us, other people too. There was no water either.  All we had was rainwater. We would pray for rain so we could collect rainwater to drink.”

“The intensity of the fighting made the situation in west Mosul untenable for us,” says Said. “Whether it was an army rocket or an IS bomb, it always seemed to fall on our heads.”

Escaping wasn’t easy. At first, Kareema and Said managed to move just a few kilometres away, to another neighbourhood in the same part of the city. It offered temporary shelter, but it was only a matter of days before this area, too, became engulfed in the conflict. They stuck it out for 24 more days, until they had no choice but to move again.

After a few days hiding in makeshift accommodation, they left in the early morning, on foot, finally managing to reach a safe area outside the combat zone. Arriving at a camp for displaced people, they were separated: Kareema was sent to the women and children’s area of the camp, Said to the men’s area. But after 12 hours they were reunited and allowed to make their way to their relative’s house in east Mosul. At last their ordeal was over.

Kareema and Said’s story is nothing unusual. In my months here at Al Taheel hospital with MSF, I’ve heard similar stories. Many of our patients are from west Mosul. Quite often, the first thing they do on arriving in east Mosul is to seek medical care. Some have wounds that have not been treated or have become infected; others have been hit by shrapnel.

“There were no cars! Even if there had been doctors, they were far away and there weren’t any cars. Besides, when you left your house, there’s no guarantee you wouldn’t get hit by mortar. Hospitals were for Daesh only.”

Our patients are the lucky ones who managed to escape, but there are still some 100,000 people in west Mosul, trapped in an area of just a few square kilometres in the old town, short of food, water and the most basic medical supplies.

Hassan, a former vet, fled west Mosul in late April with his wife, Mayssam, and their three daughters: Jouri, Ghazial and Areej.

Every morning, Mayssam would dig out her only pan and fry a little tomato paste, diluted in the little cooking oil they had left. “It was the last oil we had and I knew I could not buy any more. A bottle used to cost 1,000 dinars and now the price was thirty thousands in the black market. But that’s not even the point: it was simply no longer available. You may have had money but there was nothing left to buy.”

“There were 50 of us living in the same house, in just 100m2. We ran out of food and drinking water. In the earlier period, we had flour so we could make bread. But later on, we didn’t even have flour. The power supply was cut off a long time ago. Even the water supply was cut off. We had to go to fetch water from the well with shelling and gunfire going on around us. But the well was the other side of the city, far from the house, so we’d carry as much as we could.”

Every morning, Mayssam would dig out her only pan and fry a little tomato paste in the last of their cooking oil. “It was the last oil we had and I knew I could not buy any more,” she says. “A bottle used to cost 1,000 dinars, but now the price was 30,000 on the black market. But that’s not even the point: it simply wasn’t available anymore. Even if you had money, there was nothing left to buy.”

Hassan and Mayssam had two candles for light, as the electricity had long since been cut off. She tells me the family used to huddle together in one room so as to use just one candle at a time and make them last as long as possible.

But there was one thing they were lucky with, says Mayssam: they never had major health issues. “If we had, we knew we would have had nowhere to go.”

The entire population of the besieged area depend on a few nurses, says Mayssam, who move from house to house during the short, infrequent lulls in the fighting, without any equipment and with a completely inadequate supply of drugs.

Hassan’s main concern now is for the many family members they have left behind. “We have uncles, cousins and friends there,” says Hassan. “They are in the same desperate situation we were in. No food, no water, no medicines. We are still in touch with them by phone.”

“We escaped through the holes in the walls between the houses.  We were very frightened because there was a sniper in the street.  There was a sniper shooting at any civilians trying to flee. So we moved from house to house until we reached the security forces in the safe area.”

What is really astonishing though is that both families are determined to go back to that war-torn, brutalised area of Mosul, once the fighting has finished, while fully aware of what they will find. “We are planning to go back there once it’s over, says Kareema. It will be fine once we have water and electricity again.”

“We want to go back to our home. It’s where we live, I have my job there. If things become stable again, we’d like to go back. Sure, it won’t be the same but we’ll fix what we can. Our houses, our jobs, the streets… Nothing will be the same. But we’ll try to fix it little by little.”