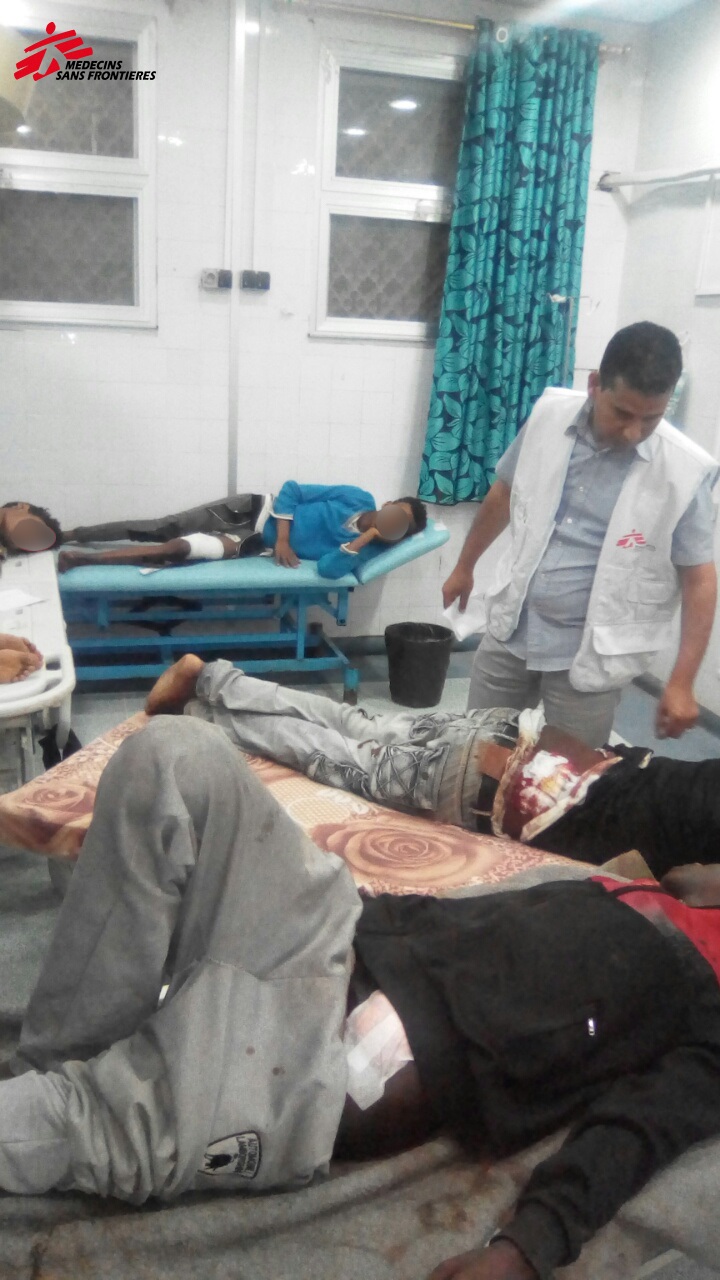 25 May 2018 - During the evening of May 23, between 5 to 6pm, more than one hundred refugees and migrants who had been kidnapped and held captive by human traffickers west of Bani Walid, Libya, managed to escape. They were shot at while attempting to flee, resulting in several casualties and 25 injured who were referred to General Hospital of Bani Walid.

The survivors, mostly teenagers from Eritrea, Ethiopia and Somalia who were attempting to seek asylum in Europe, reported they were in the clutches of human traffickers who had sold them multiple times between Bani Walid and Nesma.

In Bani Walid General Hospital, MSF team supported hospital staff to provide medical care to the 25 people wounded. Among them, 18 suffered from minor injuries and received first aid and dressing and 7 were hospitalized for further care due to severe gunshot wounds and multiple fractures.

MSF also donated supplies to the hospital to replenish their medical stocks.

Survivors told MSF of at least 15 people were dead and said at least 40 people (majority are women) were left behind. Some of the survivors told to MSF teams that they had been held captive for up to 3 years. Scarred bodies, visible marks of electrical burns, and old infected wounds give an idea as to the ordeal they have suffered. People are traumatized, and the majority are unaccompanied minors.

A group of people in Bani Walid city, working at the public hospital, the municipality, members of civil society organizations, elders, and members of security forces among others quickly reacted and played a major role to protect the escapees as they were chased by their captors and armed men looking to re-kidnap them.

“All necessary measures must be taken to ensure patients can access the required treatment and to protect these extremely vulnerable people from further harm after surviving such atrocities. Arbitrary detention cannot be a solution. They are in urgent need of protection and assistance”, said Christophe Biteau, MSF Head of mission.

This is another example of the ongoing horrors suffered by many migrants and refugees while transiting through Libya. MSF teams have no access to the clandestine prisons in Bani Walid areas, and they do not know how many people are still held in these, but kidnapping for ransom remains a thriving business, boosted by EU-sponsored policies aimed at criminalizing migrants and refugees and preventing them to reach European shores at all cost. In Bani Walid, MSF continues to provide, in partnership with local association, about 100 consultations per month on average, as many as last year.

Médecins Sans Frontières (MSF) has been working for a year in Bani Walid, reportedly a region where kidnapping of migrants and refugees and use of torture against ransoms is widespread, to support Libyan actors, as horrified by the situation as we are, and who are providing assistance to people who manage to escape from these nightmarish places of captivity. MSF runs medical consultations in partnership with a local organization (Assalam) for this extremely vulnerable population, often mentally and physically broken, and organize medical referrals for most severe cases.  MSF worked in detention centers nominally under the authority of the Ministry of Interior and its agency combating illegal immigration (DCIM) in the region of Tripoli, Khoms and Misrata.