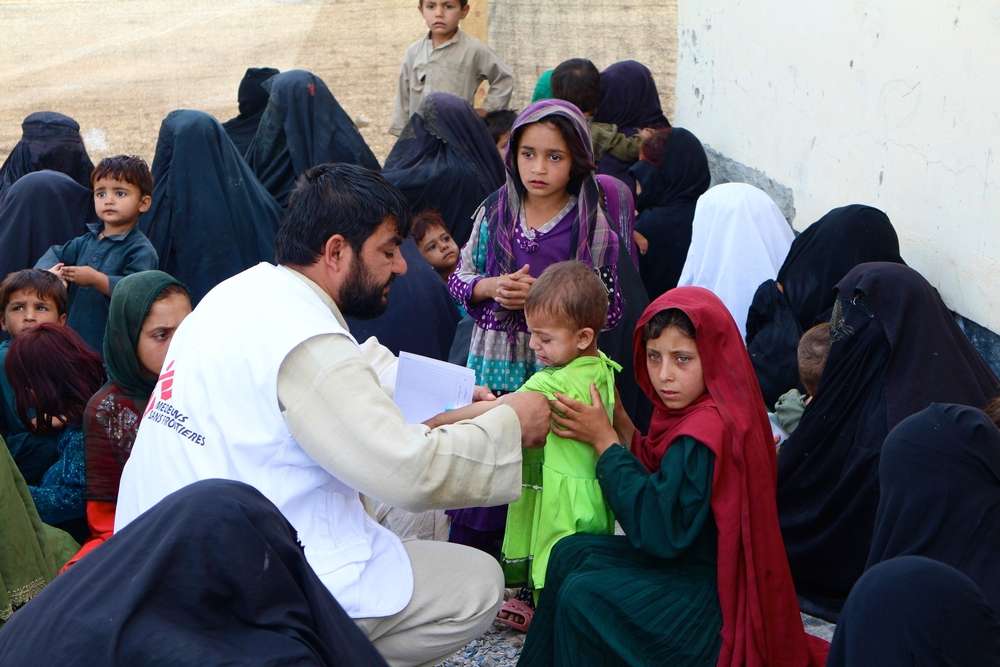 Afghanistan: “We knew we had to act quickly”

Tens of thousands of people fleeing major military operations in the Pakistani region of North Waziristan have crossed the border into Afghanistan over the past months, seeking refuge in Khost, Paktia and Paktika provinces.

Most of the refugees in Khost province are being hosted by the local community, but an estimated 1,770 families have settled in Gulan refugee camp, a vast stretch of land some 19 kilometres from the Pakistani border.

Since 5th July, MSF teams have been running a clinic, set up just outside the camp, and working to improve poor sanitation within the camp.

North Waziristan, from where the refugees fled, has very low vaccination coverage, so MSF teams have prioritised vaccinating children between six months and 15 years old against measles, a deadly disease that can spread rapidly within camps.

So far, MSF teams have vaccinated 2,965 children – or an estimated 87 percent of all children in the camp – against measles, at vaccination points set up in the camp. They will continue to provide vaccinations in the clinic for new arrivals and for children who have slipped through the net.

Meanwhile, teams of MSF health promoters have been going from tent to tent to encourage families to bring their children to be vaccinated.

“We saw two children with measles when we first opened our clinic: we knew we had to act quickly,” says Anthony Pedsizay, MSF medical referent in Gulan refugee camp.

“We sat with the tribal elders to discuss the importance of vaccinations and they have been fully supportive of the campaign.”

Vaccinating children against measles, a deadly disease that can spread rapidly within camps, is a high priority.

Spread out over a rocky, dust-filled plain, the refugees in the camp have settled in groups that reflect their family ties, tribal affiliation and place of origin, with up to 30 tents set up in a circle. The existing tribal structure has been maintained, with the elders of the four main tribes heading each community.

At MSF’s clinic, the medical team is treating an average of 100 patients each day.

“We are seeing a large number of patients with chest infections, but the most worrying issue is the risk of diarrheal and skin diseases due to the poor sanitation conditions in the camp,” says Pedsizay.

The hot and humid weather, with temperatures reaching 35 degrees, increases the risk of diseases spreading if appropriate sanitation measures are not put in place.

MSF teams have constructed two water bladders and are chlorinating a third water bladder provided by the local community. MSF teams have also dug 178 latrines, although the process has been slowed by the presence of unexploded mines, a legacy of decades of war in the area.

After a specialist demining organisation has finished clearing the area, MSF plans to increase the number of latrines, according to the further needs.

Celine Leto/MSF
At MSF’s clinic in Gulan camp the medical team is treating an average of 100 patients each day.

For most of the families in Gulan refugee camp, who were living just on the other side of the border, crossing into Afghanistan was a better option than travelling greater distances to other parts of Pakistan.

Some people were able to prepare for their journey, and arrived at the camp with many belongings, including goats, donkeys, cows, mattresses and cooking utensils. They travelled in their own cars or in rented trucks, weaving through the mountainous border region to reach Khost.

While those with cars are sometimes able to travel to Khost city, some 18 kilometres away, to buy supplies, the prohibitive price of fuel makes this journey a rare event. Since they arrived in Afghanistan, many refugees have had to sell what few belongings they own in order to make a little money. Other families were taken by surprise by the shelling, and were forced to leave everything behind before crossing the border on foot.

It is now six weeks since refugees first began arriving in Gulan camp, and it seems likely they will not be able to return home before winter.

With living conditions in the camp far from adequate, MSF’s teams will concentrate their efforts on expanding sanitary facilities, including latrines and showers, and continuing to address the medical needs of the refugees.

MSF has been working in Khost city since 2012, running a maternity hospital where more than 1,100 women are helped to give birth safely each month.

Elsewhere in Afghanistan, MSF runs a trauma centre in Kunduz, in the north, and works alongside the Ministry of Public Health in Ahmad Shah Baba district hospital, in eastern Kabul, and Boost provincial hospital, in Lashkar Gah, Helmand province.

In all locations, MSF provides medical care free of charge and the hospitals strictly observe a no-weapons policy.

Find out more about MSF's work in Afghanistan