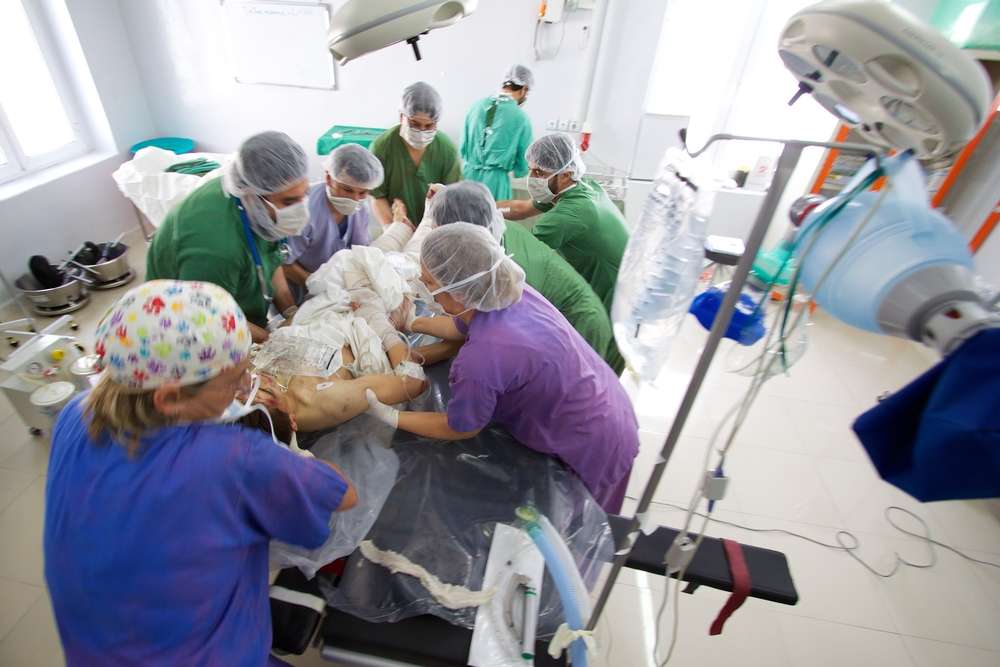 PRESS RELEASE: MSF received 22 patients at its surgical hospital in Kunduz after a bomb blast shook the northern Afghan city on Saturday.

PRESS RELEASE: MSF received 22 patients at its surgical hospital in Kunduz after a bomb blast shook the northern Afghan city on Saturday.

Five people were dead on arrival and two others died during surgery. Of the 17 people treated by MSF, 11 suffered life-threatening injuries and were in critical condition. Almost all of the patients sustained blast-related injuries including fractures, head trauma, and abdominal and chest injuries requiring specialised trauma surgery.

A young Afghan man is treated for a gunshot wound in MSF's hospital in Kunduz. December 2011.
© Michael Goldfarb

“People rushed to the hospital after the explosion, seeking information and inquiring about their families and relatives, which is understandable," said Aurelien Marechal, MSF field coordinator in Kunduz. "However, the hospital grounds were crowded, so we had to temporarily close the entrance in order to give space to the medical staff to provide urgent treatment."

Through launching a ‘multiple casualty plan,’ which classifies patients according to the severity of their injuries, the medical team was able to identify and respond to the patients requiring immediate attention.

MSF has been running the surgical hospital in Kunduz since August 2011, providing emergency surgery and follow-up treatment for people wounded in conflict and for those suffering from other life-threatening injuries. A total of 10,000 people were treated in 2012.

In all locations where MSF works in Afghanistan, a strict no-weapons policy is implemented to ensure the safety and security of patients.

“No matter what is going on outside its gates, the hospital needs to remain a safe place for doctors to work and patients to receive life saving treatment," said Marechal.

MSF has been running the surgical hospital in Kunduz since August 2011, providing emergency surgery and follow-up treatment for people wounded in the conflict and those suffering from life-threatening injuries. A total of 10,000 patients received treatment in 2012.

MSF teams also work in Ahmad Shah Baba hospital in Kabul and Boost hospital in Lashkargah and also runs a maternity in Khost province. In those facilities, MSF provides free, high-quality healthcare to anyone who needs it.

MSF does not accept any government funding for its work in Afghanistan. It relies solely on private donations.

For more information on MSF's work in Afghanistan, visit our Focus Page.