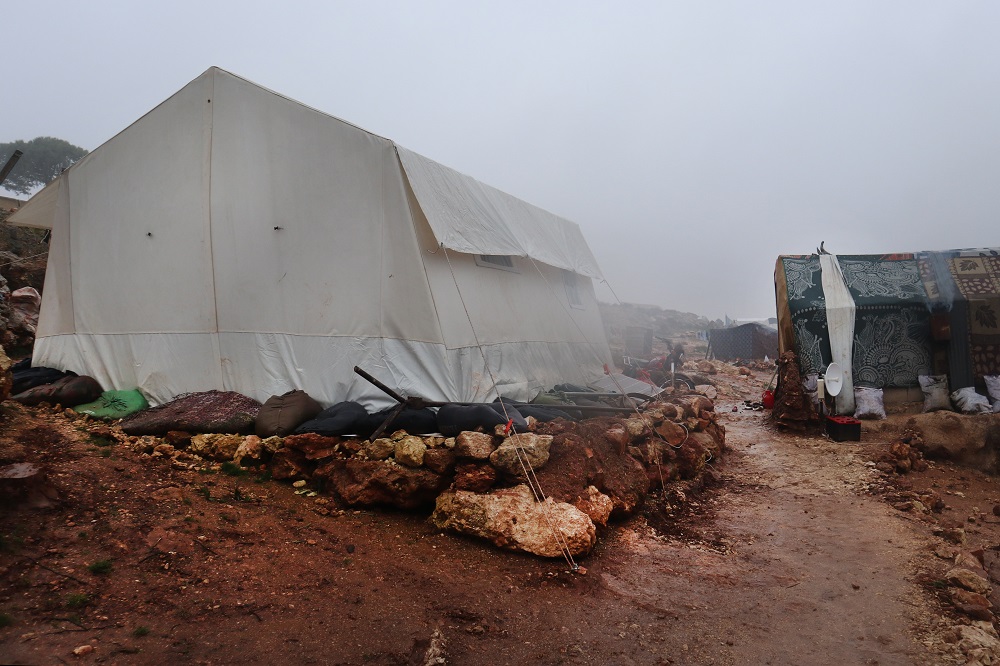 Afraid of the bombs: why people discuss the weather in northwestern Syria

Intense military offensives by the Government of Syria and its allies in southern Idlib governorate, Syria, involving shelling, aerial bombing and ground offensives, have resulted in a massive new movement of people to escape the war zone.

The northern part of Idlib, near the Turkish border, already hosts around 1.5 million vulnerable people and, according to the UN, more than 300,000 more people have fled their homes since 1 December 2019, mostly from southern Idlib.

The displaced people are frightened, uprooted and vulnerable; and overcrowding, limited shelter options, cold winter temperatures in the mountains, and an aid response that is at the limit of its capacity mean their situation is particularly difficult.

“We hear some disturbing things when out on our mobile clinics,” explains one of the MSF logistics managers in the region. “Despite the winter temperatures, people tell us that they fear the sun; they consider it a bad sign. They say the aeroplanes bomb when the skies are clear, so they prefer days that are cold, cloudy and rainy. The weather forecast for the next few days is sunny…”

MSF teams providing support to hospitals and to displaced people

As a result of the escalation of violence, several hospitals were bombed and went out of service, including the Maarat Al-Numan hospital, which is the largest hospital in the southern Idlib area. Other hospitals were evacuated as hostilities extended close to their area. Hospitals located further north are overwhelmed, and MSF has donated medical material to several hospitals to support their increased activities.

As new families have arrived, wave after wave, at displaced people’s camps, our mobile clinic teams have been expanding their activities to include the distribution of blankets, locally-made heating fuel blocks, and other winter necessities.

A water engineering team has increased their work to dig latrines in areas where there are concentrations of newly-arrived families, as well as increasing the quantities of drinkable water being provided.

Our teams providing medical care in Deir Hassan camp, in Ad Dana district, saw displaced people arriving throughout the offensive.
“They say the journey was very difficult,” says Ahmed, an MSF nurse. “They left everything and escaped when some volunteers found a vehicle for them. Some other families left at night, but people didn’t use car headlights, so accidents happened on the roads.”

Deir Hassan camp consists of several makeshift settlements where more than 11,000 people arrived during the last three weeks. These newly-displaced people received only a small emergency food kit with canned food, but no shelter and no heating devices.

A mother of four children explained that her family, together with another family of six, put all the money they had to buy a tent because they could not leave their children without shelter in such cold weather. Some families share tents with relatives, but this quickly gets very crowded.

Overall, the conditions remain dire. To provide basic healthcare in Deir Hassan camp, we are running a mobile clinic.

Further west in the district of Harem, a mountainous area of northern Idlib, an MSF team distributed winter relief supplies two days ago to 52 families who had just arrived. They had fled from a displacement camp closer to the frontlines. For some of the families, this is the third or fourth time they have had to flee for their lives.

Forced to flee, overcrowding, reliance on aid, leads some to despair

“With more than a million displaced people already in the area, the lack of shelter and near-total reliance on assistance are critical issues,” says Cristian Reynders, MSF project coordinator for northern Idlib. “Sometimes there is no space available for newly arrived families in official camps, and in other camps people are asked to bring their own tent or shelter.”

“There are organisations working to resolve this, but for the moment it is a big issue,” Reynders says. “On top of that, there are very few opportunities for people to earn money, and price inflation in the food markets is high, so people get into debt with no hope of repayment, and over time become entirely reliant on assistance.”

“There is a lot of sadness and despair in these camps,” continues the MSF logistics manager. “I spoke to a man waiting in line for a distribution of aid and asked him about his hopes, his plans. His voice was breaking as he told me his greatest wish is that this will be the last time he and his family need to flee. What can you say in reply to that?”

In the northern part of Idlib governorate, MSF runs four mobile clinics that rotate medical visits to more than 15 camps and informal settlements. The medics perform around 4,500 consultations per month, with around half the patients being children under 15 years old.

The most frequent medical complaints are respiratory infections, while the most common pathology for the newly arrived patients is psychological trauma. There are also many patients needing referral to hospital treatment, such as war-wounds that have become infected or patients with chronic diseases who have gone for too long without medication.

The Turkish border is closed to Syrians except for hospital referrals for some critical emergency medical cases. The frontlines of the Syrian government offensive are moving steadily and violently north towards the two main motorways that run east-west and north-south through Idlib.

This means that the communities of displaced people are squeezed into an ever-shrinking area as the previous offensive conducted between April and August by the Syrian army and its allies had resulted in massive displacements. There are many organisations working to assist in northern Idlib, but the needs are pushing the available assistance capacity to its limits. The need for emergency relief assistance remains as high as ever in Idlib.

MSF’s medical programs across Raqqa and Al-Hasakeh and Aleppo governorates in northeastern Syria continue despite having been temporarily reduced or suspended in October 2019. MSF has progressively resumed some activities in Al Raqqa, Al-Hol, Al-Roj and Newroz camps, Kobane/Ain Al-Arab and Tal Kochar/Yaroubiyah but has not yet been able to return to supporting the Tal Abyad hospital in northeastern Syria nor return to the surrounding area from which the clear majority of the population, including medical staff, fled in October.

To ensure independence from political pressures, MSF receives no government funding for its work in Syria.