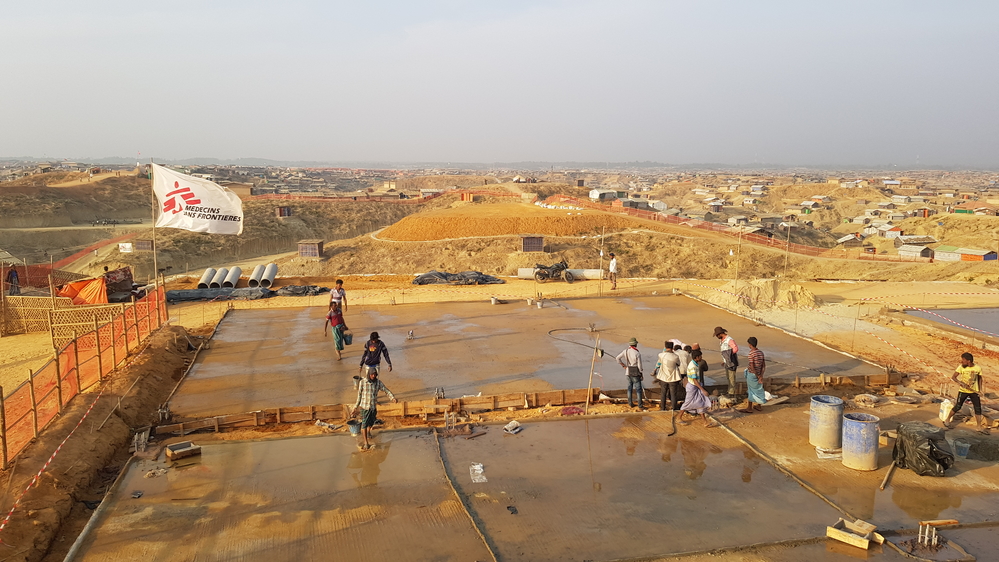 Bangladesh: The hospital on the hill providing care to Rohingya refugees

MSF has opened a new hospital in the heart of vast Kutupalong-Balukhali camp, which provides refuge to some 700,000 Rohingya refugees in Bangladesh. Not hard to find, as it is on one of the many hills that form the landscape of Cox’s Bazar, its name says it all: ‘The hospital on the hill’. It is the third MSF facility opened in the district of Cox’s Bazar since the end of March.

No time to waste

Construction began at the beginning of February and, with no time to waste, lasted just two months. With capacity for 100 patients, the hospital was designed to respond to an emergency situation – the massive arrival of Rohingya fleeing the violence in Myanmar that began on 25 August. This and the onset of the monsoon season will make ensuring access to medical care in the camps extremely challenging. For these reasons, a semi-permanent facility was required. Each of its buildings is made of a metallic structure mounted on a concrete slab.

The hospital has an emergency room, an intensive care unit, a medical analysis laboratory, inpatient departments for adults and children, a maternity department with a neonatal care unit, an isolation unit for patients with infectious diseases and an intensive therapeutic feeding centre for severely malnourished children. There are currently few malnourished children but numbers may well increase during the monsoon season.

MSF’s team at the hospital will be able to treat health problems common in refugee camps, such as respiratory infections and diarrhoea. They will also be able to respond to emergencies, such as victims of sexual violence or patients with trauma injuries or respiratory problems. When surgery is required, patients will be stabilised and taken to a hospital with an operating theatre.

The new hospital offers a wide range of medical services and family planning consultations for women.

“We can also treat chronic diseases such as diabetes, hypertension, chronic obstructive pulmonary disease and asthma, which is the leading cause of death among adults,” says Francesco Segoni, MSF’s emergency coordinator in Cox’s Bazar. “It’s important for patients with chronic diseases to have access to specialist healthcare and can be admitted to hospital when they need it.”

The hospital is also equipped to handle epidemics such as cholera and hepatitis E, which are common during the rainy season.

“With the flooding and accumulation of stagnant water, water- and mosquito-borne diseases are all the more likely to spread because of the refugees’ severely overcrowded living conditions and very poor sanitation,” adds Francesco Segoni.

Many latrines have been dug in flood-prone areas and lots of wells are quite shallow, which contaminates surface water. MSF has dug boreholes to a depth of over 150 metres, including one supplying water to ‘The hospital on the hill’, but these are not enough to meet all the camp’s needs for clean water.