CAR: "Our midwives are working as first responders" 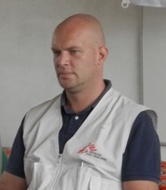 The international community must step up to improve the health situation in Central African Republic.

As donors meet in Brussels today to pledge funds to assist the Central African Republic (CAR), Médecins Sans Frontières/Doctors Without Borders (MSF) is calling for renewed commitment to the country.

A de-prioritisation of humanitarian aid to CAR by donors would have catastrophic consequences for Central Africans. The country has one of the the worst health indicators in the world – armed fighting is still prevalent and 20 percent of the population are refugees or internally displaced.  Emmanuel Lampaert, MSF's Country Manager in CAR, reports on the current situation...

Three weeks ago on Sunday, our little Gbaya Ndombia maternity was overrun by the victims of the latest gang fight in CAR’s capital, Bangui. Our midwives, whose job is to bring healthy babies into the world, had to stabilise 12 men severely injured by gun shots, rockets and grenades, while reinsuring and coaching frightened mums-to-be in labour.

Three dead bodies, including the leader of the main illegal armed group from the neighbourhood, were laid in the maternity, between a poster about breastfeeding and another about contraception.

Marcus Bleasdale/VII
The Christian population around the outskirts of Bangui loot and burn the homes of the Muslims who have fled.

The events of that Sunday were extreme, but not unexpected nor unusual: while the MSF maternity ward opened earlier this year to safely bring babies into this world, half of our midwives’ activities nowadays are spent working as first responders for male victims of violent trauma who have nowhere else to go.

Before that Sunday, we had been especially busy stitching up traders from the nearby market. They’d been clubbed on the head for having failed to pay the daily “tax” of 100 CFA (about €0.15) to the armed groups who control much of the economic and daily life in the neighbourhood.

CAR is not in the midst of an all-out war, though. In fact, the general elections held last March were supposed to close the latest chapter of acute crisis that peaked in 2013 to 2014. It does not mean, however, that deep-seated humanitarian problems have been solved.

The dead and wounded arrive in our maternity ward because it is the only health structure open 24/7 in the PK5 neighbourhood, where most of Bangui’s Muslim population lives. Bear in mind this is in the centre of the country's capital. In many rural areas the situation is even more dire.

Our organisation runs 17 projects across the country. Last year, we provided over one million medical consultations in CAR, a country of 4.9 million people. This was made possible by the generosity of our private donors, who allowed us to spend €55 million last year to provide healthcare in the country.

It’s a large sum – the third biggest budget for MSF – but this barely represents an investment of €10 per year, per inhabitant. And still, it’s more than what major institutional donors have spent to help the people in CAR in terms of access to urgent and basic health structures and services, and it’s much more than the entire budget of the CAR Ministry of Health.

"Despite his horrifyingly severe wounds, causing immense pain, he had never consulted a doctor before, because he could not afford the few dollars asked of him in the cash-strapped public clinics."

The future does not look much brighter. Fatigue has taken hold of donors. The current donor conference aims at raising €15 per year per inhabitant for health for the next five years, barely more than what MSF alone invests, and in a country where basic healthcare is extremely weak if not, in some parts of the country, virtually absent (France, for example, invests €5,000 on health per year per inhabitant).

In 2016, barely a third of the budget needed to cover humanitarian needs has been funded. Donor countries have been reducing their funding, which directly affect other NGOs that, unlike MSF, rely on public funds and are therefore forced to diminish their activities.

Bambari, in the south of CAR, is one such rural area that is particularly vulnerable to the swaying commitment of external organisations. It is literally divided by fighting, often flaring up on either side of the main bridge separating the town.

Marcus Bleasdale/VII
A man on the outskirts go Bangui runs through looted and burned houses of those Muslims who have fled.

In July this year, our programmes in Bambari had to be increased, after an international charity with a key presence in the region was forced to make the difficult decision to pull out of CAR. The announcement was attributed to the ongoing conflict along with high security and operational costs and a frail donor environment.

The withdrawal would leave Bambari with huge gaps in healthcare: and a regional hospital with effectively just two doctors to care for an estimated 55,000 people. The sad truth is that this scenario is not just unique to Bambari, it is being replicated right across the country, particularly in CAR’s regional areas.

It’s difficult to describe what it is like to live, or survive, without healthcare. Recently a patient came to an MSF field hospital with a wound so advanced that all the flesh on his toes had been eaten away, and his bones fell off when the nurse tried to clean it.

We tried to refer him to a hospital, but that was much too late: the patient, who was HIV positive, died within two days. Despite his horrifyingly severe wounds, causing immense pain, he had never consulted a doctor before, because he could not afford the few dollars asked of him in the cash-strapped public clinics.

CAR may have passed the latest peak of a decade-long crisis, but it does not mean that the situation has returned to “normal”.

The presence of active armed groups in different areas of the country – prone to periodic outbursts of violence that cause more people to flee their homes – as well as reduced access to health structures and basic services, cannot be classified as “normal”.

The CAR crisis will not be solved by itself.  If the donor community cuts funds to CAR, this will have tragic consequences for its people.