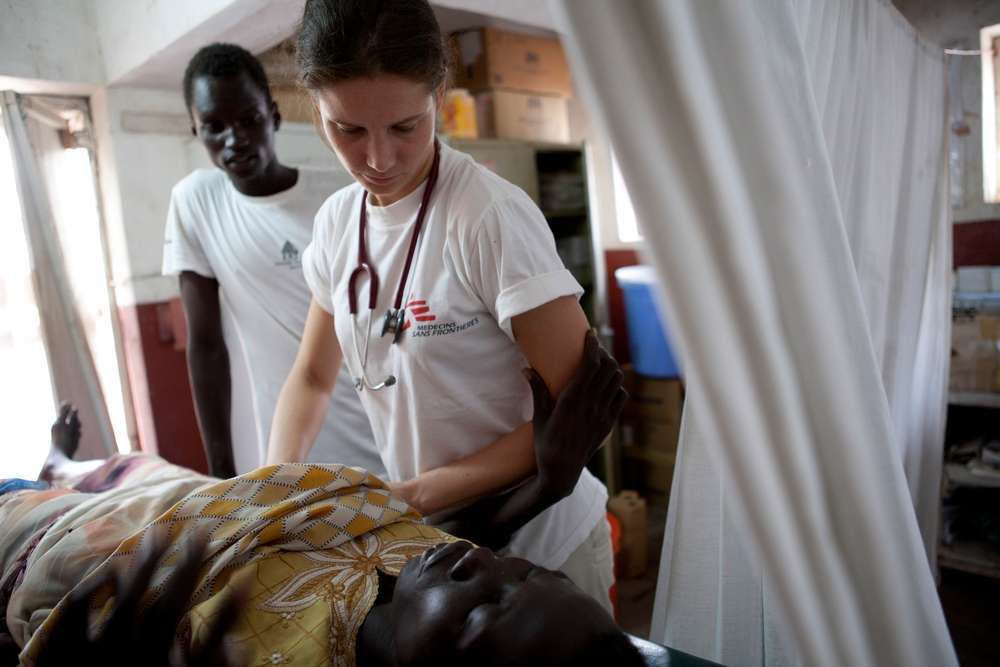 CAR: "When fighters walked past our building, everyone held their breath..."

MSF doctor Florien Oudenaarden looks back at a time of extreme violence, displacement and change

Patients crowd the small hospital ward in Bossangoa each morning as Dutch doctor Florien Oudenaarden does her rounds. They often travel miles from their rural villages or the bush by foot or bicycle, suffering from malaria, malnutrition, and trauma, or to deliver a baby in a safe place.

“Everything is bigger here, it’s always an emergency, because people come very late and their sickness has progressed,” Oundenaarden explained. “Everything we see at home we see here, but at a late stage and with no diagnostics.”

Oudenaarden has worked for Medecins Sans Frontieres/Doctors Without Borders (MSF) in Bossangoa’s hospital, in the heart of the Central African Republic (CAR), for the past six-month period of extreme violence and change.

Over a year has passed since the March 2013 coup d’etat by mostly Muslim fighters, called the Seleka, plunged the country into conflict. Christian armed groups soon formed, initially as a defense, called the anti-Balaka.

Fighting between the armed groups has since raged, with civilians across CAR caught in the deadly crossfire.

“The type of patients has not changed so much, its more the entire context,” said Oudenaarden. “When I got here, the hospital was full of displaced people. In the beginning the two religions were still mixed.

Oudenaarden remembers performing six major operations back-to-back through the night in the rudimentary surgery bay, when the hospital was under siege by armed combatants last December.

“There was a lot of shooting and grenade blasts,” she said. “Over 1,000 people of different religions were living on the hospital grounds, so you can imagine how chaotic it was. Our safe room completely filled up.

“When unidentified fighters walked past our building, everyone held their breath. Everyone thought: ‘Are they after me or are they after the person sitting next to me?’”

By late last year, the segregation of Bossangoa’s Muslim and Christian population was complete. MSF staff then traveled to the town’s overcrowded and squalid displacement camps to treat the sick and wounded.

The Catholic Mission camp – with 30,000 people at its peak – was a refuge for Christians after many of their homes were burnt down, and family members or neighbors killed and wounded by Seleka fighters.

Dangerously close was Ecole Liberte, another small enclave, which hemmed in the area’s 12,000 Muslims who were living in fear of anti-Balaka reprisals.

Only on 11th April when a convoy evacuated Bossangoa’s remaining 540 Muslims, many of whom called the town home, did relative calm take hold and those holed up at the Catholic Mission camp returned to their land.

Oudenaarden remembers that Friday morning clearly. An emergency call had come through to the hospital at dawn. A woman from Ecole Liberte was about to give birth.

This was no ordinary day. The Muslim community was getting ready to evacuate, accompanied by international protection forces from Cameroon, to the border town of Gore, southern Chad.

Here they would rejoin family members and friends, separated in the chaotic, desperate scramble to make it onto the last convoy in late January. They had packed up their scant belongings, and burnt everything else they had left behind.

“It was six in the morning, and the plan was the convoy was meant to leave between six and seven,” Oudenaarden said. “There was the grave risk if the woman went to the hospital she would miss leaving the country. But she really wanted to deliver in the hospital.”

As the 14 trucks were packed and readied to leave, Oudenaarden delivered a healthy baby boy, Bossangoa’s last registered Muslim. The new mother, with her baby, raced back to Ecole Liberte. She took a moment to show him off, and then climbed into an accompanying ambulance with a local MSF matron.

“It was a beautiful delivery,” Oudenaarden said. “What a paradox. It was a very happy moment - when everything else was so emotional and so sad.”