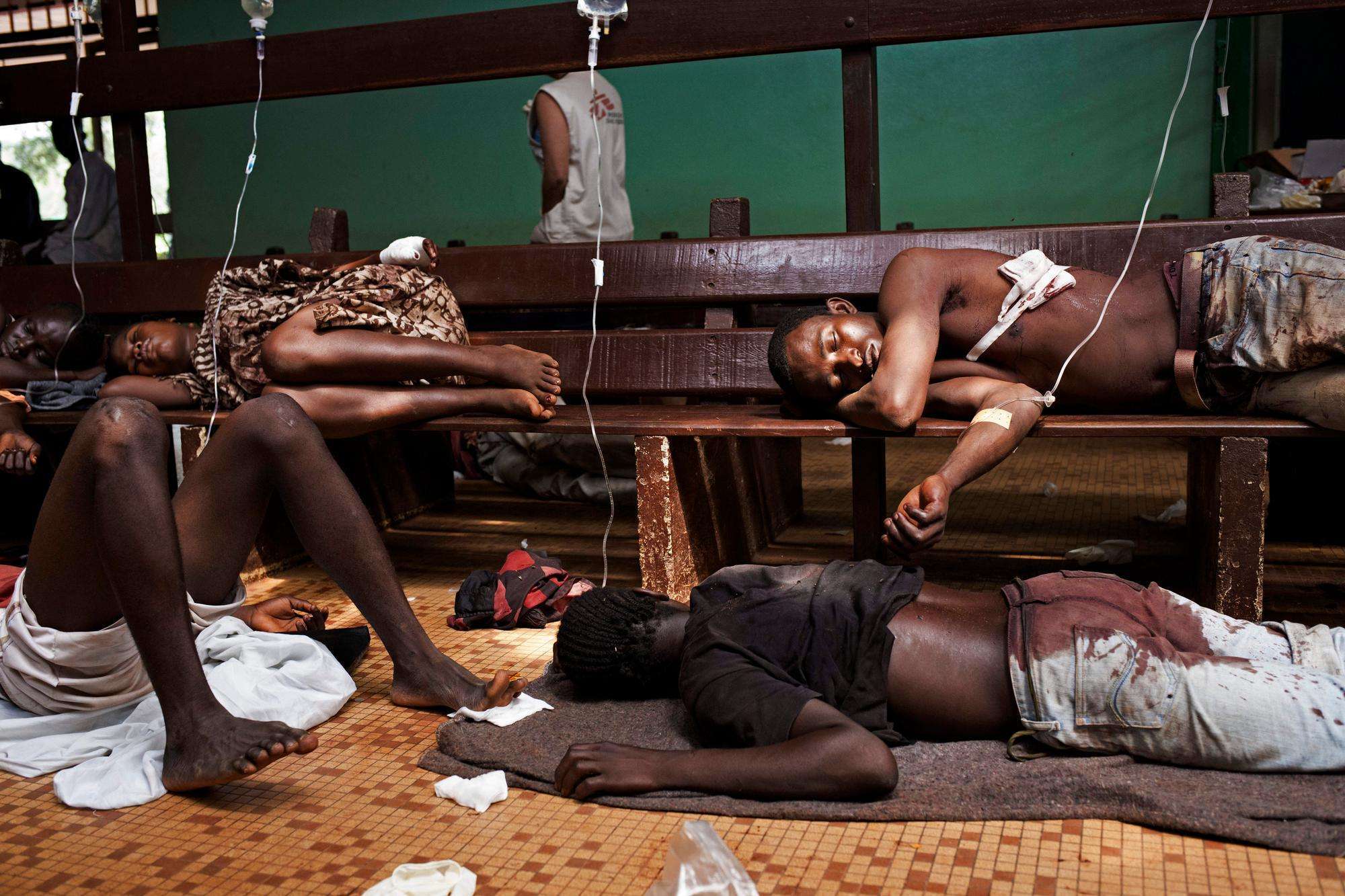 PRESS RELEASE: MSF calls on all parties involved in the conflict in Central African Republic to allow the wounded and ill to safely obtain the critical medical care they need. MSF calls for an end to violence against patients, civilians and medical staff working in healthcare facilities in Bangui and throughout the country.

Médecins Sans Frontières/Doctors Without Borders (MSF) calls on all parties involved in the current conflict in Central African Republic (CAR) to allow the wounded and ill to safely obtain the critical medical care they need.  MSF calls for an end to violence against patients, civilians and medical staff working in healthcare facilities in Bangui and throughout the country.

The wave of violence that began in the capital, Bangui, on 5th December also affects healthcare facilities. Last Thursday, staff and patients at the Hôpital de l’Amitié witnessed summary executions carried out by armed men inside the hospital.

“On Thursday, our teams saw a dozen corpses lying in front of the hospital,” says Rosa Crestani, MSF emergency coordinator.

Hospital staff no longer want to work there because of the insecurity. Several patients remain, but the Hôpital de l’Amitié is no longer operating. Some members of the hospital staff have gone to support the teams at the Hôpital Communautaire, where some of the wounded were also transferred.

The situation is also very tense there. Patients, our staff and Ministry of Health employees have been threatened and pressured.  Our teams have had to step between armed men and patients on several occasions.

“We are continuing our work, but this violence inside the Hôpital Communautaire is unacceptable and constitutes a serious violation of international humanitarian law. It has an obvious impact on medical treatment, slowing the delivery of care and leading hospital staff to temporarily leave their posts,” says Thomas Curbillon, MSF's head of mission in CAR.

“In addition, the violence means that many wounded patients will probably not try to get to medical facilities. Aid deployment as we define it – neutral, impartial and independent – cannot be provided in the face of threats and violence.”

MSF emphasises that all parties to the conflict in CAR – in Bangui and throughout the country – must respect civilians and medical facilities and must allow the wounded and ill to be treated without discrimination.

MSF calls for a ban on any armed presence in healthcare facilities and a halt to attacks and threats on patients and medical workers, both Central African and expatriate. MSF is an international medical organisation and operates independently of any authority. Our only goal is to meet people’s medical and humanitarian needs.

Hôpital Communautaire: In the hours following the start of fighting, MSF teams went to the Hôpital Communautaire to provide assistance in treating the influx of wounded patients. Sixteen medical staff are working in the emergency, surgery and inpatient departments.

Approximately 260 wounded patients have been treated since 5th December. Most have gunshot, machete and knife wounds. Just over 100 people are currently hospitalised.

More than 60 surgeries have been performed. Another surgical team is expected to arrive soon to support the MSF and Ministry of Health teams. A second operating room was opened and seven tents have been set up for the wounded and to increase inpatient capacity at the hospital.

Red Cross and ICRC teams and families have brought approximately 200 bodies to the hospital morgue.

For the more than 20,000 displaced people who have gathered at the airport and the 13,000 in the Don Bosco community centre: medical care for children under five and for pregnant women and referral of wounded patients and medical and surgical emergencies to the Castor Maternity Centre, the Hôpital Communautaire or a Bangui paediatric facility supported by the NGO, Emergency.

MSF has also set up a water supply station and latrines for displaced people in the area around the Don Bosco community centre.

Violent fighting over the past two days has left 28 people dead. MSF teams, which include 28 international staff, worked around the clock to meet the medical needs and provide assistance to more than 37,000 people displaced in the area.

Twenty-one patients with bullet wounds and two with machete wounds were treated at the Bossangoa hospital. Surgery was performed on 16 severely wounded patients and approximately 60 patients were hospitalised.

Our health and hygiene activities continue, including providing water and installing latrines for the 37,000 displaced persons who have gathered at the church compound and Liberté school.

MSF is also providing assistance to 2,000 newly displaced people who have gathered at several sites. Working in cooperation with the International Red Cross, our teams collected corpses from the outskirts of the city.