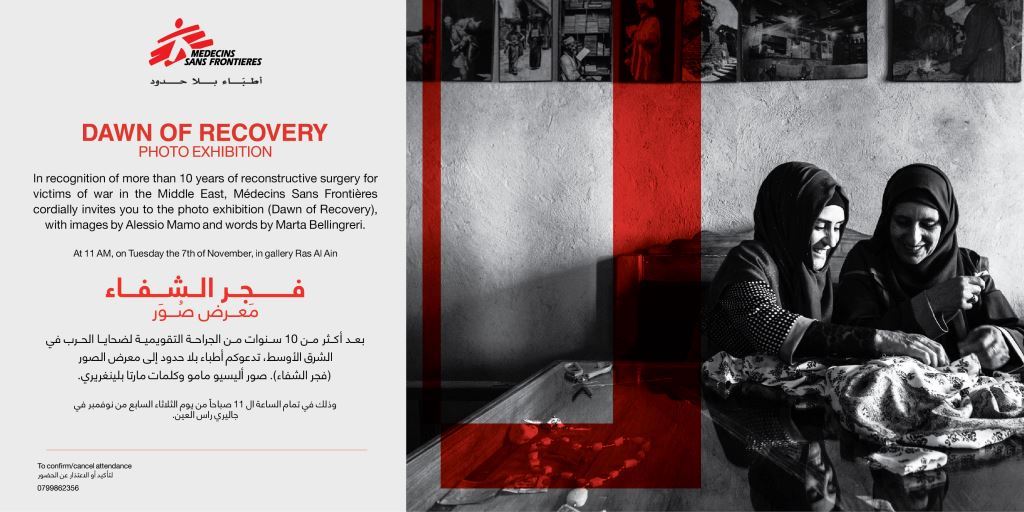 An exhibition and event with key speakers in Dubai

November 7, 2017 - After rebuilding the broken bodies and faces of thousands of war-wounded Arabs from across the Middle East over the past 10 years, Médecins Sans Frontières (MSF) is holding an exhibition and event with key speakers at Ras Al Ain Gallery, to highlight the medical achievements and war stories from its Reconstructive Surgery Hospital in Amman.

In recognition of the hospital’s 10-year anniversary, MSF will present a brief history of the project, and how it developed with the growing needs in the region due to the ongoing wars, as well as exclusive access to its photo essay – Dawn of Recovery –  which focuses on 11 individual patient stories.

The Dawn of Recovery marks the beginning of a new chapter for victims of conflicts that have swept through the Middle East. From Yemen to Syria, Iraq and Palestine, hundreds of thousands of people have lost their lives and many more have had them ripped apart.

Over the past 10 years, MSF has helped rebuild some of these lives by providing specialised reconstructive surgery, physiotherapy and mental health counselling at its hospital in Amman, Jordan. This exhibition shines a light on those individuals on the road to recovery.

MSF’s reconstructive surgery programme (RSP) was set up in 2006 in response to the high numbers of severe casualties from the Iraq War. As further conflicts erupted in the region, it opened its doors to wounded from Syria, Yemen and Palestine. Specialising in orthopaedic, maxillofacial and plastic surgery for the war-wounded, the RSP has treated over 4,500 patients and performed over 11,000 life changing surgeries since its inception.