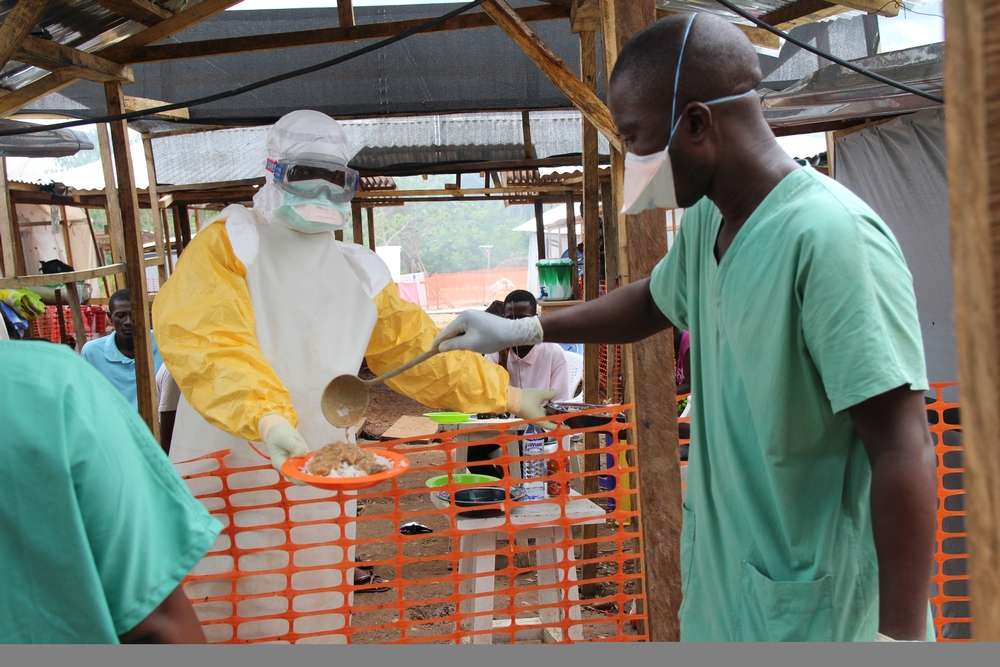 We take a look inside MSF's newest Ebola treatment centre in Bo, which just weeks after opening is already at full capacity. Three of the first patients to be discharged were siblings. Read their story.

A few weeks ago: a cassava field. Today: a gleaming tented city, as incongruous as a spaceship amidst the surrounding scrubland. Four huge white tents dominate, surrounded by smaller tents and brick-built buildings, intersected by orange fences and dotted with purple chairs. This is Médecins Sans Frontières/Doctors Without Borders (MSF)’s newest Ebola treatment centre, near Sierra Leone’s second city of Bo.

Built in just five weeks by shifts of labourers working around the clock, it opened its gates on 19th September and, despite the construction work that still continues around its perimeters, the first of its 34-bed-wards is full.

The first patients were shuttled by ambulance from a nearby Ebola transit centre, set up by MSF when the deadly disease first erupted in Bo district.

Now Ebola has spread from the remote east of Sierra Leone, near the border with Guinea, to every district in the country, and the patients arrive from as far away as Port Loko and the capital, Freetown.

This journey  used to take some four hours, but now – with five of the country’s 12 districts under quarantine and police checkpoints on all the main roads – it takes much longer.

Among the first patients to arrive were three siblings: Haja, 26, Abivatu, 17, and Lamphia, 24, from Moyamba district, one of the current hotspots of the disease.

Siblings united in recovery despite grief

Their elder brother, a medic, treated a sick patient and then fell ill himself. When he died, the family was put in quarantine, prevented from leaving the house by police stationed outside.

One by one they got sick. By the time they reached MSF’s treatment centre in Bo, their father – deputy head of a local secondary school – was dead, as were five of the eight siblings; the three who remained were so ill that no one expected them to survive.

Little by little, the conditions of all three improved. First Abivatu tested negative for Ebola, followed soon after by Haja and Lamphia.

On the day of their release the three siblings washed in chlorinated water and emerged from the shower block, blinking in the sunlight, dressed in new clothes. The centre’s staff – sprayers, doctors, hygienists, nurses, counsellors – gathered around, singing, clapping their hands and dancing.

Despite the deaths of most of their family, the siblings are keen to get back home and resume their lives: Abivatu to study accountancy at college, once it reopens, and medical student Lamphia to finish his final year before qualifying as a clinical health officer.

Only Haja, who was the main carer for her younger siblings, is unsure of what to do next.

So far, 16 patients have been discharged from the new centre, cured of Ebola. Each time it is a huge boost to the morale of the other patients as well as the 280 staff who work here.

The majority – 260 – are Sierra Leonean, many of whom previously worked at MSF’s mothers’ and children’s hospital nearby.

Others come from different backgrounds, but most share an enthusiasm to join the fight against a disease that has shut down schools and universities countrywide, made food prices rocket, stopped travel, instilled widespread fear, and is threatening to destroy the fabric of society.

They range from the nine local women busy preparing pasta and fish for the patients’ lunch in a freshly tiled kitchen, to the teacher of philosophy filling in the logbooks in the supply tent, and the former pastor who now works as a mental health counsellor.

James Caizer Lamina volunteered to work for MSF when he saw that his listening and counselling skills could be of service in the Ebola crisis.

“They say unity is strength,” says James. “I am helping the nurses to fight Ebola. I really, really want to drive Ebola out of this country.”

With such highly motivated staff, the mood in the centre is upbeat, despite the stigma that many health workers face in their communities for working with Ebola patients.

“There’s a very good energy amongst the local staff,” says Dr Monica Arend-Trujillo. “The atmosphere is so optimistic here. I don’t see anybody being scared or worried or depressed. I was surprised to find that working here is actually a very uplifting experience.”

The new treatment centre has been designed to be as simple as possible to work in, to minimise the risk of staff making mistakes and exposing themselves and others to potential infection – though as everyone who works in the centre knows, there is no such thing as ‘no-risk’ where Ebola is concerned.

Its architecture is an acknowledgement that the epidemic is not likely to end anytime soon. “It’s designed to last a year,” says logistics coordinator Michel Geilenkirchen – “although it could last ten times that,” adds logistician Pietro Curtaz.

For all the motivation and the pride, the fact remains that this is an epidemic which has killed more than 4,000 people, and is likely to kill many more.

“Yes, I feel proud that we succeeded in our plan to construct it very fast and to a very high standard,” said Michel Geilenkirchen, “but when you know that six in ten patients will die there, there’s a very big shadow hanging over everything.”