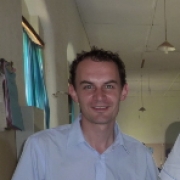 Four year old Mary had been admitted a couple of days before with severe malnutrition.

Elijah*, one of our drivers pulls the MSF vehicle up outside the MOH (Ministry of Health) hospital in Bentiu. We are here to pick up a child whom I had brought in the morning to receive a blood transfusion.

At our therapeutic feeding centre we don’t have a laboratory, our only available tests are rapid bed side tests for blood glucose, malaria, Kala azar (a parasitic disease that occurs in outbreaks in this area), syphilis and haemoglobin (blood count).

Low haemoglobin levels are pretty common amongst the children in the clinic due to a combination of many factors including poor nutrition, repeated malaria infection and hookworm infection leading to chronic blood loss in the intestine.

Back at home we generally would be starting to get very worried if we saw a child with a haemoglobin less than eight however here the children are generally well adapted to a chronic anaemia and can tolerate lower haemoglobin levels. However sometimes the count is too low and the child is struggling with shortness of breath a rapid heart rate and even some cardiac failure as the heart struggles to keep the body’s organs going.

Four year old Mary* had been admitted a couple of days before with severe malnutrition.  While examining her I noted the paleness under her lower eyelid and asked one our nurses to check the haemoglobin. Sure enough the result came back at an unsurprisingly low 3.5 (it should be over 10). She was obviously struggling a little with the anaemia her respiratory and heart rates were higher than they should be.

I took the decision to try and a get a blood transfusion for her. Normally this would be a straight forward decision but in malnourished children transfusion can be very risky as their bodies struggle to cope with the infusion of extra fluid. I would have to take her to the MOH hospital up the road for the transfusion.

Whilst the hospital staff are more than eager to help out in such situations power supply issues mean they struggle to maintain a functioning blood bank and usually in order to get a transfusion family members will have to donate.  On the first day I bring Mary for transfusion there is no power so the lab are unable to perform the necessary screening tests on potential donors so I have to try again the next day.

Very little is straight forward here but when things work out it can be rewarding. On the second day the power is back and Marys father Dak* is able to donate the necessary blood. We are now here to pick them up and I can see Dak outside the ward with a beaming smile standing beside his already brighter looking daughter.

Over the next few days Mary’s condition continues to improve, she respond well to the therapeutic milk and then plumpy nut and under the care of the nurses and paramedics at the feeding centre gets stronger every day. Most days I see her father, he always greets me and seems to be always smiling. I am interested to know his story and before Mary is discharged we sit down to have a chat.

Dak tells me he is 52 years old but he looks much older. His clothes are shabby and worn but while he seems to lack material possession he has no lack of openness or emotion. Dak was born in a village outside Bentiu but now lives close to the town. He had been married before but his first wife died from kala azar. Dak tries to provide for his family as a cultivating farmer, his main crop is maize. He also has three cows which provide a small amount of milk. Also at certain times of the year he fishes in the river using nets or hooks.

Before he could marry his current wife he had to pay 40 cows which took him three years to save for. Now they have four children aged from six down to two.  Their oldest child is in school and part of the proceeds from last year’s harvest had to go towards school fees, a uniform, pens and exercise books.  He tells me their remaining food from last year’s harvest ran out a month ago in April and now the family are fending from relatives. ‘We are suffering because there is no place for working, we just depend on the relatives’.

It will be at least three more months before this year’s harvest is ready.  I can’t bring myself to ask Dak how he plans to cope until then and what kind of decision he will face in the autumn with the proceeds of this year’s harvest will he be able to feed his family and send the children to school? I ask him simply instead what are his hopes for the future ‘I am praying for peace in South Sudan and that this new generation will bring something good’.

*names have been changed for anonymity