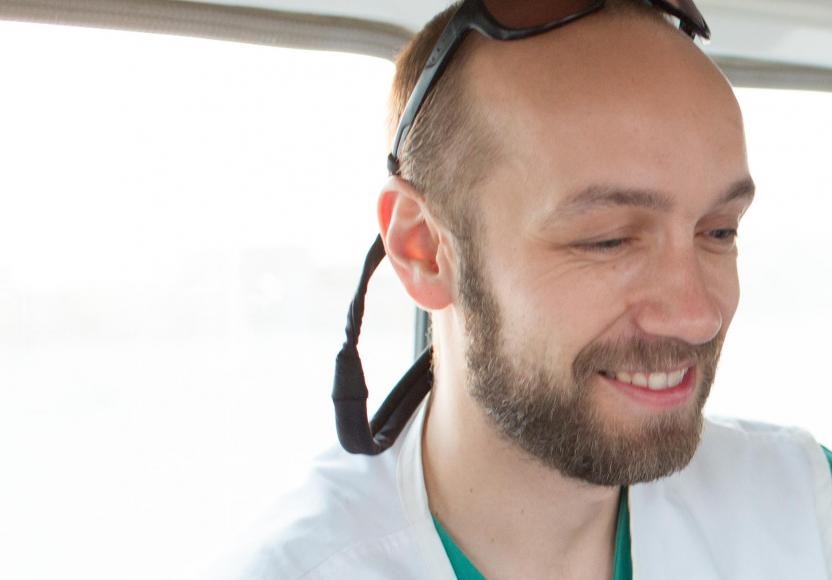 Five myths about working for MSF

Michal Pospíšil is a Czech nurse who recently returned from his first assignment with Médecins Sans Frontières / Doctors Without Borders (MSF), working in Sudan. In his blog, he challenges some of the most popular myths about working for MSF.

Although most people know MSF as an international aid organisation, what may be less known (and what I really appreciate) is that we don’t feel the need to bring vast numbers of healthcare workers from around the world to countries that don’t necessarily need them.

On the contrary, many of the positions MSF relies on are filled by local and regional staff with whom we have regular employment contracts based on local legal frameworks.

Generally speaking, the ratio between international and local staff is approximately one to ten. In the field clinic I worked in in Sudan, I was actually the only member of the medical team not hired locally.

(Strangely, this meant that I was the first white person – or “chawaja/muzungu" – that some of the children I treated had ever seen. Which is an interesting privilege indeed.)

During my stay, the majority of the people working for MSF were actually refugees from South Sudan. They worked alongside just a couple of international staff members from around the world (for example, Kenya, Nigeria, Japan, Mexico, Colombia, Austria and Denmark) who mainly carried out coordination and managerial tasks.

2. “MSF staff are only healthcare professionals”

A team that was made of 100% medical staff would struggle to function in an emergency setting.

Who would ensure the safety of the staff in dangerous environments? Who would manage water, sanitation and hygiene facilities? Who would negotiate with local authorities the possibility of us even being present?

Drivers, accountants, translators or cleaning staff… all of them are MSF.

Although the majority of our workers may be medical professionals, there are so many places where we wouldn’t be able to provide healthcare to a single patient without the commitment and support of a wide range of experienced team members.

Ah yes. Heroic doctors who jump from helicopters straight into battlefields to grab crying babies and carry them to safety while avoiding flying bullets and shrapnel pieces.

Later they leap over barricades to vaccinate some children, before concluding their heroic deed by delivering a short lecture on the necessity of maintaining basic standards of hygiene and sanitation to local communities.

Finally, of course, they extend some morally inspirational goodbye, distribute a few bars of soap, some mosquito nets and then go on their way.

And now back to reality…

It is true that if you work with MSF you should be slightly tougher than the average person. However, hardly anyone would work for or cooperate with the organisation if essential security measures weren’t properly covered and if our staff felt continuously endangered.

Michal Pospíšil with some of his MSF teammates in Sudan. Photo by MSF.

"At-be bile grůš", meaning "doctors without money”, was one of the first Arabic phrases I learned. However, although we do voluntarily join MSF, we are not “volunteers”.

When you work for MSF as international staff you get a contract and a salary that is sufficient to prevent bailiffs from coming to your apartment and wiping it clean while you‘re on assignment. You may also count on some pocket money to cover your basic needs while on-site at your project.

You certainly won’t suffer from hunger, though some weight loss may be expected. But, that’s usually a desirable outcome for most of us anyway.

Sure, it’s possible to get a better salary and perhaps an expensive car with many other jobs, but only a few organisations have a reputation that is as strong and respected throughout the world as MSF. Nor do they do such vital and genuinely life-saving work. That’s what really counts.

5. “MSF staff arrive at a crisis, perform a few surgeries and leave”

However, this doesn’t mean that we arrive at a particular place, pitch a few tents, sew up a few abdomens and run back home. In fact, each project has its own objectives and strategies.

Often on arrival, our teams not only have to set up a hospital or medical centre in the middle of nowhere, but also support and train existing local staff. And, sometimes, the standards of medical care achieved by such teams are more efficient than those found in modern hospitals in developed countries.

Of course, projects do then come to an end when situations and circumstances stabilise. Ideally, the final stage of our projects is then handing over services to local authorities who can run them in the longer term.

So, as I see it, we also serve as a kind of emergency support and educational institution.

Because of that, my aim is always to build a medical team that will be as autonomous as possible and adhere to all relevant protocols after our departure.

Such a task requires considerable management, teaching and communication skills. It’s crystal clear that MSF workers need to be professionals in their field, but they also need to be able to work with and pass their knowledge on to others.

For me, apart from its obvious objectives, MSF is also an educational institution. Even in my own life, I have never learned as much about myself and about the world as I have with MSF.