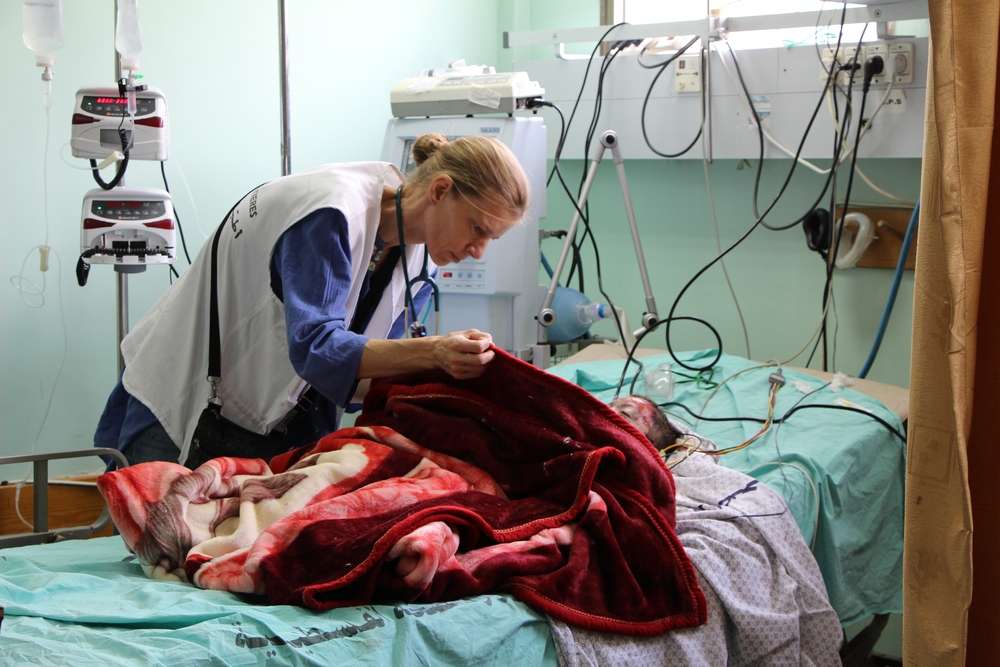 Since the beginning of Operation Protective Edge in the Gaza Strip, the majority of the dead and wounded in Gaza are civilians and medical workers are also coming under fire

Since the beginning of Operation Protective Edge in the Gaza Strip, the majority of the dead and wounded in Gaza are civilians and medical workers are also coming under fire, the international medical humanitarian organisation Médecins Sans Frontières/Doctors Without Borders (MSF) said today.

Women and children comprised most of the wounded people arriving on Sunday morning in the emergency room in Al Shifa Hospital in Gaza City, where MSF is working, following heavy shelling overnight and in the morning in the city’s Ash Shuja’iyeh neighbourhood.

MSF personnel witnessed hundreds of people fleeing the area. MSF calls on Israel to stop bombing civilians trapped in the sealed-off Gaza strip, and to respect the safety of medical workers and health facilities.

“Shelling and air strikes are not only intense but are also unpredictable, which makes it very difficult for MSF and other medical workers to move and provide much needed emergency care,” said Nicolas Palarus, MSF field coordinator in Gaza.

Two brothers, eight and four, were among the hundreds of civilians wounded overnight in Ash Shuja’iyeh. They lay side by side in Al Shifa’s intensive burn care unit, suffering severe burns from a missile strike on their house.

It was only at dawn that people began to flee the area by foot or in packed vehicles, and when wounded people were able to reach the hospital either by ambulance or on their own.

“In the emergency resuscitation room, half of the severe cases died within minutes, and half required emergency surgery,” said Audrey Landmann, MSF medical coordinator in Gaza.

At the hospital, MSF also witnessed two paramedics who had died and two others who were injured while trying to retrieve wounded from Ash Shuja’iyeh.

Early morning of 20th July in Shifa Hospital. Ambulance staff bring in two of their colleagues. Both were killed.

Separately this morning, a clearly identified MSF vehicle escaped an air strike 300 meters away. Israeli authorities had earlier guaranteed secure movements for MSF from the Erez border crossing to Gaza City, so that an incoming surgical team could be picked up.

“Medical workers and facilities must be respected, and shooting should not occur at or near ambulances and hospitals,” said Palarus.

Since Israel launched its ground offensive the number of victims is increasing exponentially.

“While official claims that the objective of the ground offensive is to destroy tunnels into Israel, what we see on the ground is that bombing is indiscriminate and that those who die are civilians,” said Palarus.

Three families of MSF staff members are sheltering at MSF’s post-operative clinic in in Gaza City.

“They have nowhere else to go and crossing the border does not seem a realistic option,” said Palarus. “United Nations shelters are now overcrowded and hygiene conditions are extremely worrying.”

In response to the emergency, MSF is supporting Al Shifa Hospital in Gaza City with a full surgical team, medical equipment and emergency supplies, and has donated two emergency stocks to the Central Drug Store in the south and north of Gaza.

The MSF post-operative clinic in Gaza City is running at 10 to 30 percent of its capacity because the intensity of the bombing impedes patients from accessing the facility.

Regular MSF activities in Nasser Hospital in Khan Yunis have been interrupted by the conflict. MSF has been working in Gaza for more than 10 years, providing medical, surgical and psychological services.  It also responded to the 2009 and 2012 emergencies in Gaza.