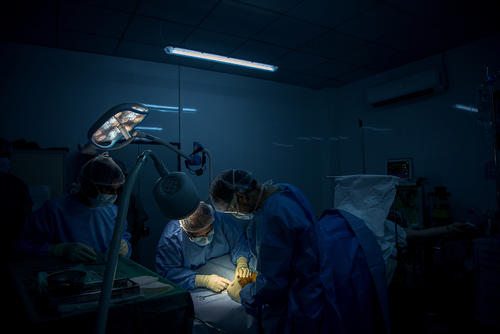 The battle for Mosul has taken a staggering toll on the people of Iraq’s second largest city...

The battle for Mosul has taken a staggering toll on the people of Iraq’s second largest city, particularly on those who recently escaped from inside western Mosul, where extremely intense fighting inflicted high number of casualties and deprived the population of access to assistance for several months. Health needs are shifting from war injuries to medical cases and long-term rehabilitation care.

In June, MSF opened activities at a medical structure in West Mosul to give life-saving trauma assistance to war-wounded people escaping from the final conflict areas of the Old City, and to provide maternal care for people returning to the area.

The project provides surgery, short-term post-operative care, maternity and newborn units, paediatrics, an emergency room and an inpatient department. Since opening, the hospital has provided assistance to more than 3,671 patients in the emergency room, including 362 patients with war-related trauma injuries, and 448 deliveries. The inpatient ward, which opened on 20 July, has admitted 275 patients.

MSF began by rehabilitating and equipping a 20-bed temporary emergency room. In the medical paediatric ward, two 14-bed rooms have been rehabilitated.

Teams supported the opening of a 14-bed inpatient therapeutic feeding centre and have just completed the construction of an expanded 20-bed emergency room. By mid-October MSF will finish the rehabilitation of an intensive care unit. Since the beginning of August, 1,642 patients have been treated in the emergency room and the paediatric ward has admitted 554 patients.

Qayyarah
In Qayyarah, 60 kilometres south of Mosul, MSF opened a hospital in December to provide surgical and emergency medical care. To cater to the growing and diversifying needs, the facility now has 62 medical beds, including an intermediate care unit, observational beds and two resuscitation beds.

The hospital extended its paediatric capacities to address high numbers of infants, mostly under the age of six months, suffering from malnutrition.

An MSF team composed of a psychiatrist, two psychologists and two psychosocial counsellors works at a mental health clinic for patients admitted to the hospital or referred from Qayyarah camps.  More than 1,300 mental health consultations have taken place.

Qayyarrah camps
In late July, MSF opened an ambulatory feeding programme in the Qayyarah camps, where an estimated population of 160,000 people displaced from Mosul are living.

Two clinics have opened in Jeddah 6 and Airstrip camps and a third is under construction in Jeddah 5. A group  of 340 children – including follow up patients referred to by Qayyarah inpatient therapeutic feeding centre ITFC – are currently in the programme. The programme provides assistance to children under five years of age, with a special focus on babies under six months of age who are at the highest levels of risk. The programme also includes a baby-friendly area with a focus on breast feeding promotion, and support for mothers to resume breast feeding. Malnutrition-related mental healthcare is also provided.

Today, MSF mobile teams give treatment for chronic diseases (mainly diabetes, epilepsy, asthma, thyroid dysfunction and hypertension). In addition, an MSF team of more than 20 psychiatrists, psychologists, mental health doctors and counsellors provides care in nine camps to people suffering from moderate to severe mental conditions.  Activities include psychological and psychiatric consultations, group therapy, psychosocial counselling and child therapy. In 2017, the teams working in the camps have so far carried out close to 23,000 medical consultations, including primary healthcare and non-communicable diseases, and more than 18,000 mental health consultations.

Diyala governorate
MSF has been working in Diyala governorate since 2015, and supports displaced populations in three camps for displaced people in Khanaqin district. Teams, working in collaboration with the Directorate of Health, had provided more than 10,000 individual and group counselling sessions medical and mental health consultations by July 2017.

Babylon governorate
Since the spring of 2017, MSF has been supporting the Ibn Saif Paediatric Hospital located in Musayib. The team concentrates on supporting this 40-bed hospital through capacity-building and training, as well as logistics support. An  average of 280 patients are admitted per month, including newborns. MSF has created a psychosocial unit for inpatients and the community.

For information on projects in the governorates of Nineveh, Kirkuk, Dohuk, Sulaymaniyah, Salah Al-Din, Diyala and Anbar, please refer to the June 2017 update.