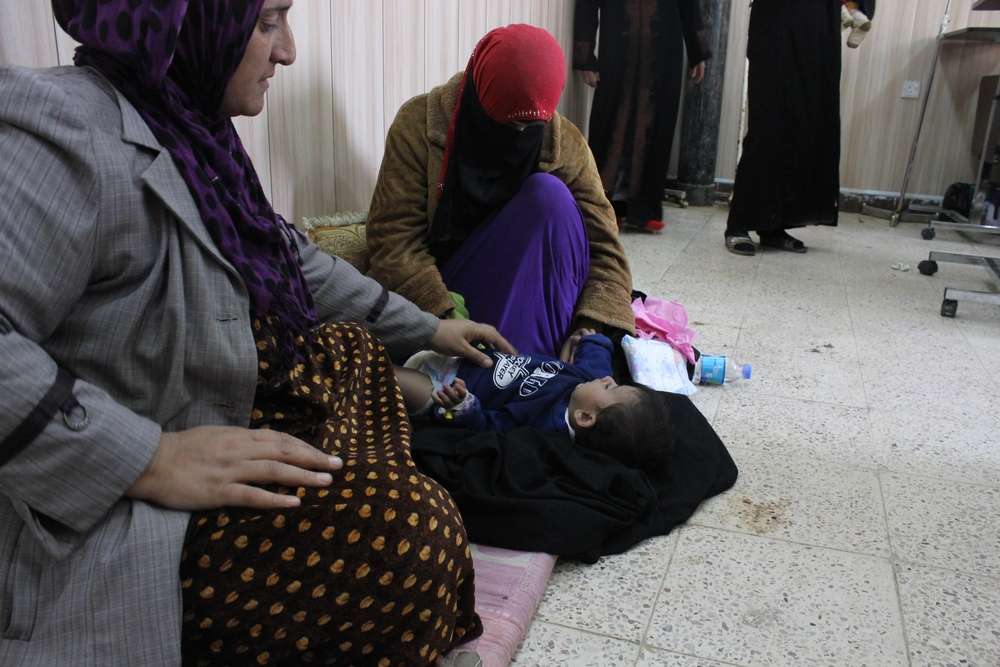 The Hawijah offensive has forcibly displaced nearly 14,000 people to towns in neighboring districts of Kirkuk governorate. According to international medical organisation Médecins Sans Frontières/ Doctors Without Borders (MSF), they are arriving in vulnerable conditions and in urgent need of care.

Amsterdam/Iraq, 11 October 2017 – The Hawijah offensive has forcibly displaced nearly 14,000 people to towns in neighboring districts of Kirkuk governorate. According to international medical organisation Médecins Sans Frontières/ Doctors Without Borders (MSF), they are arriving in vulnerable conditions and in urgent need of care.

Upon arrival at the so-called entry points, 25 km north and 40 km east of Hawijah’s centre, people are in urgent need of shelter, medical care and food.  On October 5, an estimated 14,000 internal displaced people (IDP) have arrived at Debis checkpoint, Daquq IDP camps and Maktab Khalid entry point since the start of the offensive on September 21.

Since then, MSF teams in the different Kirkuk locations have provided 3201 medical consultations for people arriving from Hawijah, including six war wounded of whom one 8-year-old boy, all were suffering from blast injuries due to airstrikes and landmines.

“Daquq camp is currently the only camp in Kirkuk governorate receiving people who fled the Hawijah offensive. It hosts around 11,000 people, who fled Hawijah district since October 2016. The MSF team in the camp has been providing medical care since January 2017, through an out patients department (OPD) for general medical consultations, treatment for non-communicable diseases like diabetes and high blood pressure, and mental health.”

A 37 year-old-man who fled from the south of Hawijah said: “Fleeing Hawijah was so dangerous that people call it the road of death. We had to pass a narrow road between a mountain and a valley. Many people died on this road. Some of them fell in the valley. It took us 15 – 16 hours to escape the besieged town”.

People living in the district have been under siege and for almost three years. This has deprived them of basic services like medical care, as the infrastructure and facilities in the district were not functioning properly, and humanitarian aid was not available.

“Due to the siege, MSF teams have not been able to enter the district, but we positioned our activities as close as possible to the frontlines to provide healthcare services to those who need it, including urgent medical for the war-wounded.”

Since the start of the offensive, MSF teams in Qayyarah hospital have received a total of 56 people with war wounds.  MSF medical teams in Kirkuk, Tikrit and Qayarrah remain on standby with a triage and stabilisation point ready to deploy if the need arises.

“By the time people decide to flee Hawijah, most are already incredibly vulnerable, and then you add to that the physical and mental drain of the journey. We receive patients in really critical conditions.”

A 40-year old man from the district says:

Teams started providing medical assistance at these locations in November 2016, mainly through the out patients department (OPD) (for general medical consultations) and the support for non-communicable diseases (like diabetes, high blood pressure, etc…).

During the months leading up to the offensive, MSF began supporting the emergency rooms in the two main Kirkuk hospitals with supplies and training to doctors and nurses working with the Iraqi Department of Health to help prepare them to manage war wounded trauma cases. At the same time, and in Qayyarah hospital, MSF is providing surgical and emergency medical care to war-wounded arriving from Hawijah.

The facility has 62 medical beds, including an intermediate care unit, observational beds and two resuscitation beds. The teams assigned to the Qayyarah camps are visiting the IDP camps receiving newly displaced persons from the Hawijah area, to monitor the nutrition status of the new arrivals and assess the need for a possible intervention.

To the south of Hawijah, MSF launched medical activities through medical mobile clinics in Salah al-Din Governorate in August 2016. Currently primary health care services are available in Al Alam camp where 9000 people displaced from Hawijah and Shirwat are hosted.