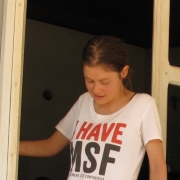 Iraq: Mahmoud and the mint plant

Trish blogs about a man whose devotion to his family kept the team grounded in war-torn Mosul...

Trish blogs about a man whose devotion to his family kept the team grounded in war-torn Mosul...

This year, as I planted mint seeds in the Yukon soil of northern Canada, I thought of Mosul, Iraq.
Eighteen years ago, when I moved to the Yukon, my dreams revolved around living sustainably in the wilderness with no electricity or running water. I moved into a canvas tent in the bush and cleared land for a large garden. I dreamed of producing a bounty of vegetables, but that first growing season introduced me to the harsh realities of gardening in the Canadian North. I struggled with the cool dry climate, the short season, the constant risk of frost and the incredibly long summer days.
After a few years of producing minimal quantities of kale, cabbage and carrots, I hung up my gardening gloves. Humanitarian aid called me and I began working for Médecins sans Frontières (Doctors Without Borders) as a nurse and, eventually, as a project coordinator.
For the past nine years, I have worked with MSF in Africa and the Middle East. My time in the Yukon has shrunk to only a few precious months a year – not long enough to get my hands dirty in a garden.
I rarely think of gardening when I am on assignments with MSF. But this year, in the depths of the ugly Mosul war, Mahmoud and his mint plant brought it back into my life.
The first time I met Mahmoud, he was walking down the road in West Mosul. The war was raging fewer than two kilometres away, the sound of explosions pierced the ear drums, the constant gunfire reigned terror on the nervous system, and there was Mahmoud – walking down the road with a mint plant in hand.
My team and I were in search of a large room to set up a trauma stabilization clinic. We wanted to be close to the frontline, where we could stabilize the wounded and increase their chance of surviving the ambulance journey to the hospital. But big rooms were hard to find – most large buildings had been destroyed during the war.

Everyday, he came to work with his mint plant

We stopped Mahmoud on the side of the road and asked if he knew where we could find a large room. In Mosul, you need to be cautious of who you trust – but we were all drawn to Mahmoud with his mint plant. Mahmoud took us on a tour of various buildings where we could put our clinic. In every building that we toured, he brought his mint plant. It was endearing but odd.
Once we selected the place for our clinic, we hired Mahmoud as one of our guards. Everyday, he came to work with his mint plant.
For the past two and a half years, Mahmoud and his family lived in Mosul, which was controlled by the Islamic State. During the time of IS, Mahmoud educated his children at home so they would not be exposed to the IS school curriculum. He taught his kids how to grow plants and his youngest daughter grew a mint plant. She loved that plant.

Being in the camp meant his family would be safe, and would have access to food, water and health care

In the war in Mosul, the Iraqi army slowly reclaimed areas from the Islamic State. When the Iraqi army took control of the street where Mahmoud lived, it was finally safe enough for him to send his family to a camp for displaced people south of Mosul. Being in the camp meant his family would be safe, and would have access to food, water and health care. Mahmoud stayed behind to guard their house.
When he sent his kids to the displacement camp, his youngest daughter asked him to take care of her mint plant. He promised he would keep it with him at all times until she returned. And he did.
That plant grounded all of us. On days when the bombing or fighting was really intense, I would look outside the clinic to see Mahmoud sitting calmly in his shelter – with the plant on his lap. When injured people arrived with children, he often kept the children outside with him and he would introduce them to his plant.

He asked me to plant the seeds at home, where the plants could have a better life

Mosul was a dangerous place for anyone to live. The constant bombing and gunfire threatened people's lives and homes. Mahmoud's house had not yet been destroyed, but it did not have running water or electricity. The war destroyed the infrastructure. So, at the end of every day Mahmoud would fill up two bottles of water from the clinic. The first bottle was for him to drink, the second was for all the plants in his house. While the mint came with him everywhere, it wasn't his only plant. His kids had left behind a house full of greenery and he was dedicated to making sure they survived.
When I gardened in the Yukon, my beloved plants captured all my attention. I lived in the bush, I had no running water and I had to haul water many kilometres to nourish them. I was always dreaming of watering systems and ways to protect them from the early frost. In Mosul, Mahmoud's growing challenges were on a totally different spectrum. He struggled to keep his plants alive as much as he struggled to keep himself alive.
I loved working in Mosul, but the time eventually came to head back to the Yukon. As I prepared to leave, Mahmoud brought me some mint seeds. He asked me to plant the seeds at home, where the plants could have a better life.
So, when I planted the mint seeds in the sandy dry soil of the Yukon earlier this year, I thought of Mosul. I thought of Mahmoud, his children and all the other people affected by the war.
What I once saw as a challenge – hauling water to the garden and protecting the mint plants from the Yukon climate – I now see as freedom, privilege and opportunity.
This post originally appeared in the Globe & Mail.