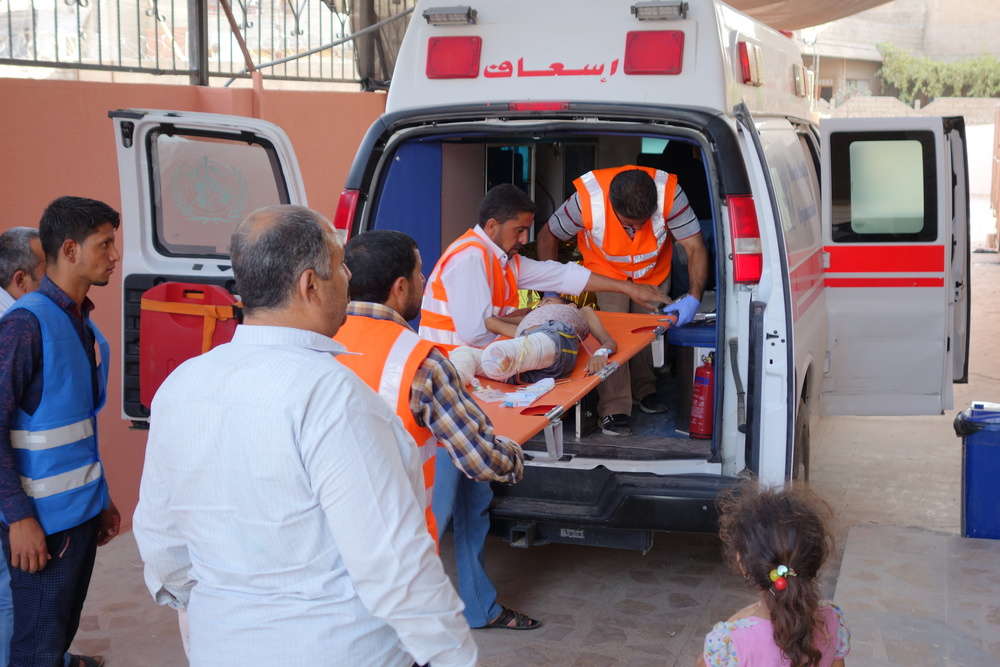 Iraq: Women and children among the scores of war-wounded treated at MSF hospital in West Mosul

Extreme levels of conflict and violence in the besieged city of Mosul, Iraq are taking a devastating toll on residents of the embattled Old City.

Extreme levels of conflict and violence in the besieged city of Mosul, Iraq – including airstrikes, bombardment, suicide attacks and gunshots – are taking a devastating toll on residents of the embattled Old City.

In less than two weeks since officially opening its hospital in West Mosul, one of only two hospitals functioning in this part of the city, Médécins Sans Frontières (MSF) has treated over 100 patients for war-related injuries, including more than 25 children and 20 women. However, MSF fears that only a small fraction of residents are able to access medical assistance on time and that many are dying on the battlefield.

MSF medical staff in west Mosul attend to a boy bleeding heavily from the ear due to an explosion injury.

“Every day, our teams are treating patients from the Old City, many of whom are women and children,” says Stephanie Remion, MSF emergency coordinator for West Mosul.

“The stories of hardship our patients tell us are impossible to put into words. We see patients with war-related injuries ranging from shrapnel wounds, gunshots and blast injuries, to burns and broken bones from collapsing structures."

“Despite the tremendous efforts undertaken by staff in front line trauma stabilisation points and by ambulance drivers, the numbers of patients we are receiving are comparatively low relative to the unknown thousands of residents thought to be trapped in the conflict zone. Our greatest fear is that many of the most urgent cases are dying on the battlefield, unable to access life-saving medical assistance.”

When the hospital, located approximately three to four kilometres from the front line, officially opened on 23 June, MSF teams responded to a mass casualty incident by treating 18 patients. One patient was received in a life-threatening condition and seven were at risk of dying without medical treatment.

On 1 July, teams responded to another spike of more than 20 war-wounded patients, most of whom were women and children.  On a daily basis, MSF teams continue to receive patients with a range of war-related injuries. Of the more than 100 patients MSF has treated for war injuries in West Mosul, 13  had immediately life-threatening injuries and more than 50 were at risk of dying without medical treatment.

MSF medical staff in west Mosul treat patients with more than 25 trauma-related cases. Most of the patients received that day were women and children.

Life has become an everyday struggle for survival for the unknown thousands of residents still trapped in the Old City, according to people who have spoken to MSF.

“My granddaughter died of starvation and I also had to put my grandson in the grave. Two of them; one starved to death and the other was hit by a mortar. I put them in a grave together… I buried them in the garden,” an elderly woman told MSF after arriving at the hospital.

“We have gone three days without water. The water we drank [in the Old City] was not good, we had diarrhoea whenever we drank it … the sounds of explosions were terrifying and we were starving.”

Since opening the hospital in West Mosul, Iraq, MSF has provided medical assistance to more than 200 patients for trauma injuries and other medical issues. The hospital provides surgery for the war-wounded, emergency caesarean sections, short-term post-operative care and maternity care. It is equipped with an emergency room and a mass casualty intake room for triage. In total, MSF is providing medical assistance for people affected by the Mosul crisis in eight project locations in and around the city.

MSF offers neutral and impartial medical assistance regardless of race, religion, gender or political affiliation. In order to ensure its independence, MSF does not accept funding from any government or international agency for its programmes in Iraq, relying solely on private donations from the general public around the world to carry out its work.