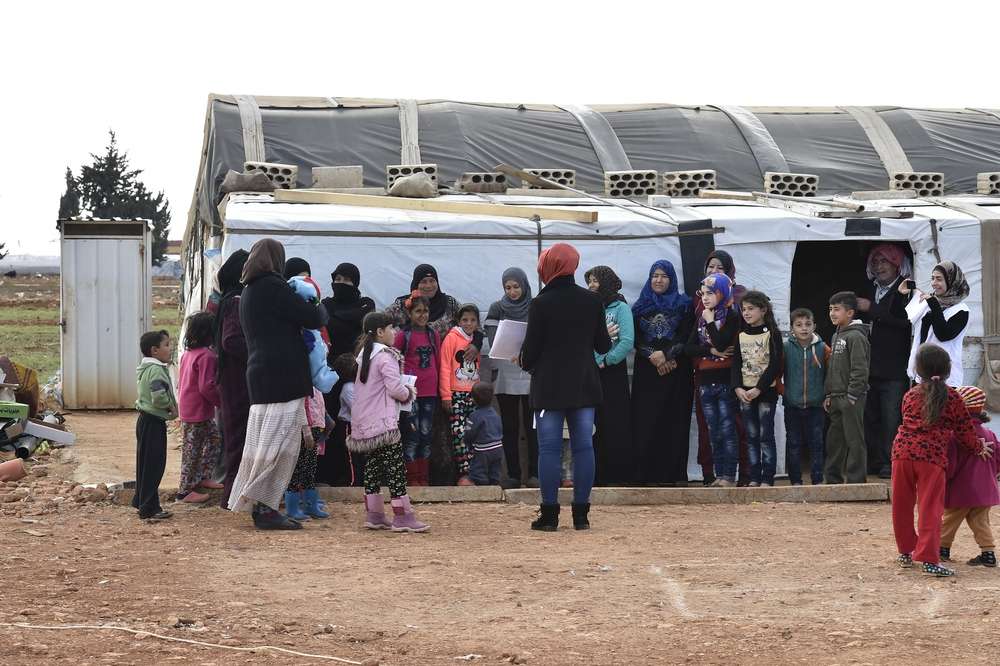 A new MSF survey shows half of Syrian refugees are not receiving required medical care. Immediate steps must be taken to improve shelter and provide aid to new arrivals.

Refugees who have fled violent conflict at home to seek safety in Lebanon do not receive anywhere near adequate levels of humanitarian assistance and are living in extremely precarious conditions, a detailed survey released today by the international medical humanitarian organisation Médecins Sans Frontières/Doctors Without Borders (MSF) reveals.

The MSF report, “Misery beyond the war zone”, shows that of the 220,000 Syrians who have sought refuge so far in Lebanon, many cannot obtain necessary healthcare, among other worrying findings.

An elderly Syrian refugee suffering from Parkinson's disease sleeps in a room in a ramshackle home on a cattle ground in Tripoli, Lebanon, surrounded by his daughter-in-law and granddaughter, January 22, 2013.
© Michael Goldfarb/MSF

The survey reveals a marked deterioration of the humanitarian situation in Lebanon, in large part due to extremely lengthy registration delays.

Refugees in Lebanon are not entitled to formal assistance if they are not registered. Lebanon is home to the majority of Syrian refugees.

“Registration should not be a condition for receiving assistance in any emergency crisis,” said MSF General Director Bruno Jochum.

“Yet access to humanitarian aid is seriously hampered by the difficulties many refugees encounter in registering on arrival in Lebanon. The roll out of aid must be accelerated and expanded,” he said.

Syrian refugees and other displaced people in Lebanon do not have access to free healthcare and adequate shelter. Living conditions for the majority of refugees and Lebanese returnees remain extremely precarious.

More than 50 percent of people surveyed by MSF, whether officially registered or not, are housed in substandard structures in inadequate collective shelters, farms, garages, unfinished buildings, and old schools. Most provide paltry protection against the elements, if any at all. The dire living conditions are contributing to deteriorating health conditions.

Click on the image above to view a copy of the report. © MSF

Seventy-five percent of the respondents are living in conditions utterly unsuitable for the hardships of winter.

People registered with the United Nations High Commission for Refugees (UNHCR) are entitled to food and fuel vouchers and healthcare cost coverage but more than 40 percent of those surveyed were not officially registered.

“We are in an extreme situation, we don’t have enough food and we don’t know who to go to for help.

"The only food we receive is purely out of the solidarity of our Lebanese neighbours.

“As adults we can eat once a day, but we cannot tell our children to do the same,” says a refugee father.

“If we didn’t fear the bombing in Homs we would go back immediately.”

In most parts of Lebanon, the capacity of host communities to absorb refugees has reached its limit. Families that arrived earlier are fast running out of money to pay for food and shelter and have no access to basic medical care.

The medical situation has clearly deteriorated over the past six months. More than half of all interviewees (52 percent) cannot afford treatment for chronic diseases and nearly one-third have been forced to suspend treatment because it was too expensive to continue.

Three Syrian refugee families, five adults and twenty three children, are living in this unfinished house with open doors and windows, inadequate to protect them from the freezing winter temperatures in this mountainous region. © Nagham Awada/MSF

Access to medical services for the most vulnerable populations – whether they are registered or non-registered, Palestinians refugees from Syria or Lebanese returnees – must be made an immediate priority and acted upon, MSF said.

All refugees must be provided with assistance immediately upon arrival in Lebanon and guaranteed access to healthcare.

“It is time for donors to truly commit themselves to doing what is needed to address the growing needs of the refugee population in Lebanon, and for national and international aid actors to evaluate the methods and the amount of the aid they are providing,” said Jochum.

“MSF is calling on the authorities and agencies to accelerate the establishment of reception centres for new comers and to immediately make available collective shelters adapted to winter conditions, in order to cope with the increasing influx of refugees.”

In mid-January 2013, MSF began distributing fuel vouchers to refugees, with 300 families now able to have heat for two months. As of today, MSF has doubled its staff from 50 to 112 and its operational response is scaling up.

In Syria, MSF is working in three hospitals in the north of Syria, in areas controlled by armed opposition groups. Medical teams provide emergency care, surgery, and maternal health care. Between June 2012 and early January 2013, MSF teams conducted more than 11,000 consultations and performed more than 1,200 surgical interventions. MSF is also providing medical and surgical services to Syrian, Palestinian, and Iraqi refugees in Jordan, Lebanon, and Iraq.

Visit our Focus pages on MSF's work in Lebanon and Syria for more information.