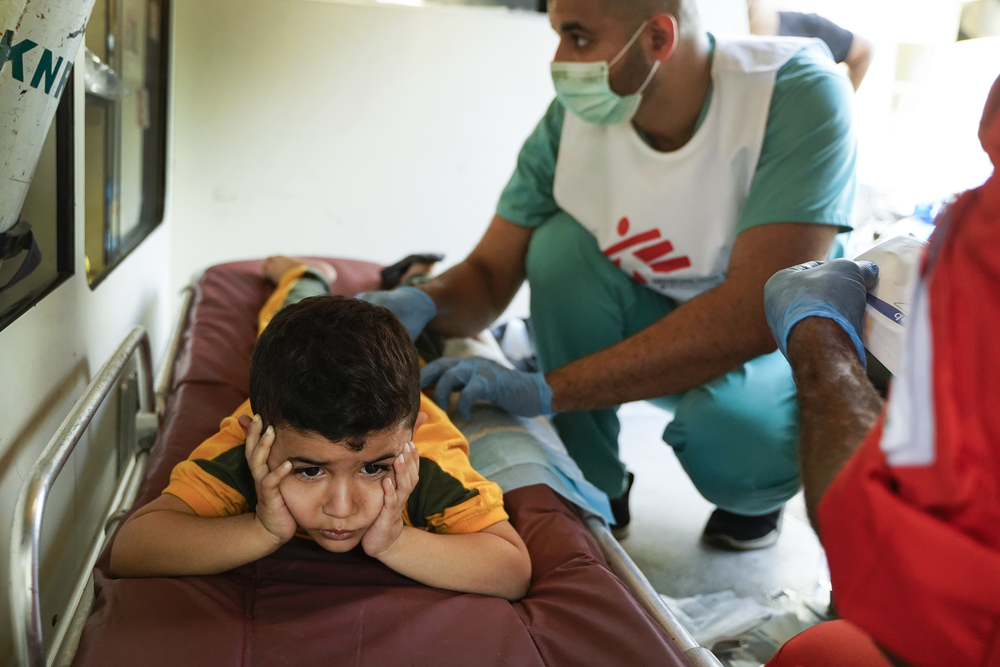 A week after the devastating blast that took place in Beirut on 4th August 2020, Médecins Sans Frontières/ Doctors Without Borders (MSF) is carrying out an emergency response to provide medical support to the people most impacted by the explosion. MSF’s activities cover three main areas of intervention: wound care for people still suffering from injuries, continuity of care for chronic diseases patients, and mental healthcare for people affected by the explosion.

MSF’s response is delivered through two fixed medical points that have been set up in the neighbourhoods of Mar Mikhael and Karantina, the areas most affected by the explosion. We have begun a door-to-door intervention, to understand the needs of people living in the area and so to better provide them with assistance. MSF teams have also installed water tanks in the area, and distributed water and hygiene kits to people coming to the fixed medical points. This had been highlighted as an essential need by people surveyed in the neighbourhood.

The powerful explosion that happened a week ago ripped through Beirut’s port warehouses. It caused the deaths of more than 150 people and injured over 6,000. The first response to the explosion came from the people of Lebanon themselves, who spontaneously tried to provide aid and support to those impacted by the blast, using whatever minimal resources they had available. The blast generated seismic shockwaves that shook the ground, shattered windows and destroyed buildings across Beirut, a city already reeling from an economic crisis and a surge in COVID-19 infections.

“Before the explosion, the public system was struggling to handle the increasing number of COVID-19 cases,” says Julien Raickman, Head of Mission in Lebanon. “Since then, there has been a very steep rise in reported COVID-19 cases in Lebanon, especially in Beirut. There have been more than 1,500 new cases in a week. This represents almost 25 per cent of all cases reported in the country since the beginning of the pandemic. On the night of the explosion, there was a huge influx of patients into health facilities across the capital, and infection and prevention measures could not be implemented properly, which eventually led to this increase. Over 300,000 people lost their homes and have had to find other places to stay, which doesn’t make things any easier. This rise of cases is a major concern for us and we’re trying to see how to best adapt our projects under such circumstances.”

Another area of concern for MSF is mental health. “After the civil war, economic crises and the recent financial and social hardships, this latest incident has added an extra layer of trauma for the people of Lebanon,” adds Raickman. “Based on our experience, we know that this will have a tremendous impact on the psychological wellbeing of the people and will stay for years to come. That’s why a national mental health strategy needs to be put in place to manage the long-term psychological impacts of this crisis on the people of Lebanon.” As mental health is a key pillar of MSF’s work the country, we were able to quickly mobilise a team of nine psychologists to take part in our emergency response. They provided psychological first aid and are now working towards developing a long-term response for people in need.

Even before we began our emergency activities, MSF donated first aid dressing kits and surgical masks to the Civil Defence and the Lebanese Red Cross on the night of the explosion and in the days that followed, to prevent the spread of COVID-19 and respond to the explosion. Since then, MSF has been working on providing additional medical supplies to support those tending to the high number of injured.

“The role of these actors and of local organisations has been crucial, especially in this first week following the explosion. We’re trying to adapt our projects based on existing activities that have already been implemented by civil society groups, because they are clearly the leading force in this collective response to the events,” concludes Raickman.

About MSF in Lebanon:

Médecins Sans Frontières/Doctors Without Borders (MSF) is an international, independent, medical humanitarian organisation that delivers emergency aid to people affected by armed conflict, epidemics, natural disasters and exclusion from healthcare in over 70 countries around the world. MSF offers assistance to people based on need and irrespective of race, religion, gender or political affiliation. MSF began working in Lebanon in 1976 in response to the civil war, sending medical teams to the south of the country and to Beirut. This was MSF’s first mission in a warzone. Today, MSF provides free medical care in various locations with over 600 staff members in Lebanon.