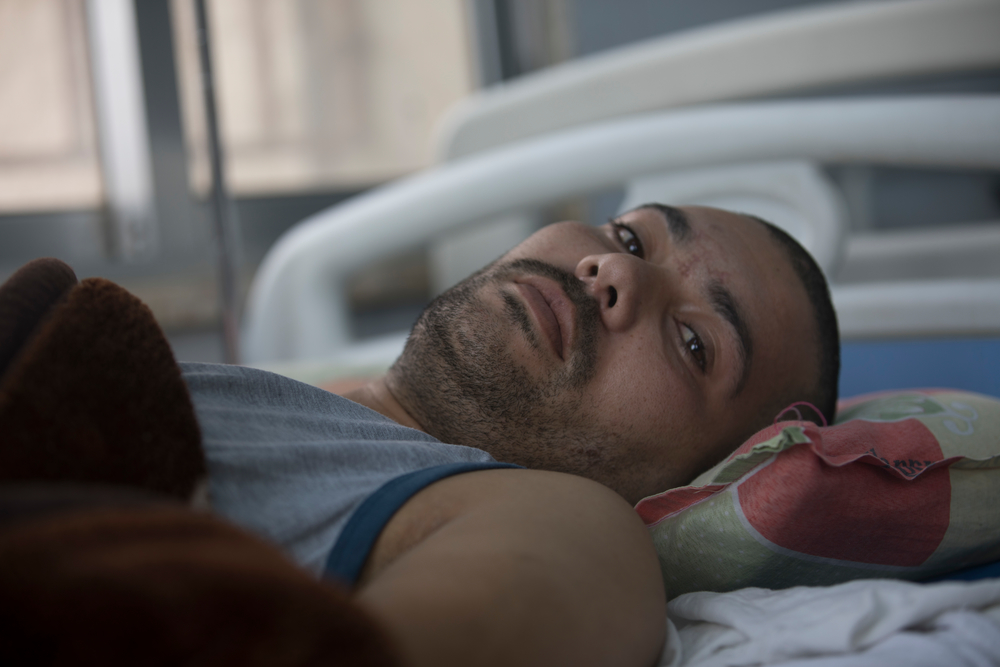 More than four years of saving lives in Jordan: MSF brings down the curtain on its Ramtha project

Amman, Jordan, 5 June 2018 - After more than four years of emergency lifesaving activities in which over 2,700 war-wounded Syrians underwent medical treatment, Doctors without Borders/Médecins Sans Frontières (MSF) has taken the difficult decision to close the Ramtha surgical project in northern Jordan. The decision came in light of the sharp decrease in the number of wounded Syrians referred from southern Syria to Ramtha hospital since the establishment of a de-escalation zone in July of last year.

Following the onset of the conflict in Syria in 2011, the health sector has struggled to respond to the rising medical needs of the people in Syria. In southern Syria, the complexity of severe injuries required specialised medical care; medical referrals to Jordan seemed to be one of the few viable options for the survival of the critically wounded.

On the other side of the border, less than 5 kilometres away, the emergency room (ER) of Ramtha hospital started to fill up with cases, as wounded Syrians were crossing the border for lifesaving care.  MSF made an urgent intervention in September 2013 by opening the Ramtha surgical project to assist in responding to the influx of patients arriving with severe injuries caused by a destructive conflict.

“One of our very first critical patients was admitted in September 2013 after he had been caught in an airstrike in southern Syria. He told our medical team ‘let me die, you can’t fix me,’” said Paul Foreman, then MSF Head of Mission in Jordan.

The patient needed major surgery and three external fixators – devices which keep bones stable until they heal. After nine months of care in the hospital and more than 30 surgeries, he was discharged. “Not only did I survive, but I’m going to be able to walk out of here,” the patient said.

With every escalation in violence in southern Syria came an equal rise in the number of incoming wounded to Jordan. The surgical work in Ramtha peaked in mid-2015 as 125 Syrian patients who had sustained blast injuries reached the hospital’s ER in June. The medical team raced against time to stabilise the cases and to find space in the 41-bed facility for those arriving with fresher wounds.

The MSF team saw firsthand the brutality of the nearby conflict. “Almost 75 per cent of patients received in Ramtha had sustained blast injuries with complex poly-trauma,” says Shoaib Muhammed, MSF’s Medical Coordinator in Jordan.

“One of our biggest challenges was the limited number of Intensive care unit (ICU) beds available in Ramtha. As the dynamics of the conflict changed, we also started seeing more head, spinal and neuro-injuries in need of specialised care that could not be offered in southern Syria,” he said.

The patients’ wounds made the short yet treacherous journey to cross the border from Syria potentially life-threatening. MSF went on to advocate for improved border access for the critical cases of wounded Syrians, helping to establish an organised referral mechanism. In addition to this, MSF advocated to the Jordanian authorities to grant those who needed further medical follow-up the chance to complete their long-term recovery in MSF’s post-operative care unit in Zaatari refugee camp.

However, MSF’s medical engagement in Ramtha decreased following the closure of Jordan’s border with Syria in June 2016. Even those with severe injuries were no longer able to access the lifeline across the border in Jordan. The 41-bed facility of Ramtha with its operating theatres, wards and corridors stood quiet and half empty, while the sound of bombings across the border were deafening. MSF’s voice grew louder, calling for the resumption of vital medical evacuations to enable the wounded to receive specialised medical treatment.

“It was extremely difficult to be in Ramtha at the time,” says Peter Rinker, MSF’s former Ramtha project coordinator. “As we [the Ramtha team] heard the raging sound of explosions, we were haunted by many questions; ‘Are there any wounded on the other side? If there are, did they manage to reach a hospital safely and quickly? Were they able to receive the medical care they needed? Would they be able to cross the border to our facility if hospitals in Syria could not treat them?’ Most of these questions no one had answers to.”

Violence erupted once more in February 2017, causing the number of people in need of lifesaving surgery to soar. Medical evacuations at the Jordanian border soon increased, and once again, the wards in Ramtha were overflowing with patients.

Soon after, the activities of MSF’s Ramtha project again slowed, with the announcement of a ‘de-escalation zone’ in southwest Syria in July 2017, which brought down the level of violence in the south. The number of critically-wounded Syrians referred from field hospitals in southern Syria to Jordan suddenly plunged – from 48 patients in June, to just 16 patients in July and again less than half as many in August.

However, MSF continued to provide medical services for patients already recovering in its wards. “I was close to home, in an old building, when a projectile or bomb exploded and tore down the building,” says Karim*, 25-year old Syrian patient from Dara’a. “The ceiling came crashing down over my head and I was caught under the rubble. I suffered a concussion and fell unconscious. I was told that I had been moved to four or five different hospitals that day until it was decided that my case was too critical and had to be transferred to Jordan.”

“My relatives in Syria insisted that I remain in Jordan until my recovery is complete. They are concerned for my health since there is no capacity or treatment opportunities for me there at the moment,” he says, two days before his anticipated discharge as the Ramtha project’s last official patient.

“I would love to remain in this safe place, far away from war and death, but I must go back to my country, rules say so. But in the end, I miss home, I miss my wife, I miss my six-month old daughter. I learned recently that she started to crawl. I do hope I would be there with her when she says her first words,” he says.

Over the course of four years, MSF’s Ramtha surgical project has helped patients recover from physical injuries, but also from mental and psychological trauma. Services provided for patients included general inpatient care and follow-up, physiotherapy sessions and psychosocial support. Since its inauguration in September 2013, the Ramtha project has seen at least 2,700 war-wounded patients in the ER, admitted and treated 1,842 patients, carried out more than 3,700 major surgeries, performed more than 8,500 physiotherapy sessions, and over 5,900 psychosocial support sessions.

Today, MSF closes the chapter on one of its largest medical programmes in Jordan. A project that has impacted both the lives of Syrian patients and the MSF team. While the Ramtha project ends it operations, MSF continues to remotely-support field hospitals in southern Syria from Jordan, and provides medical treatment for Syrian refugees and vulnerable Jordanians through programmes dedicated to surgery, primary healthcare, treatment of non-communicable diseases, mother and child healthcare, and psychosocial support in different governorates across the country.