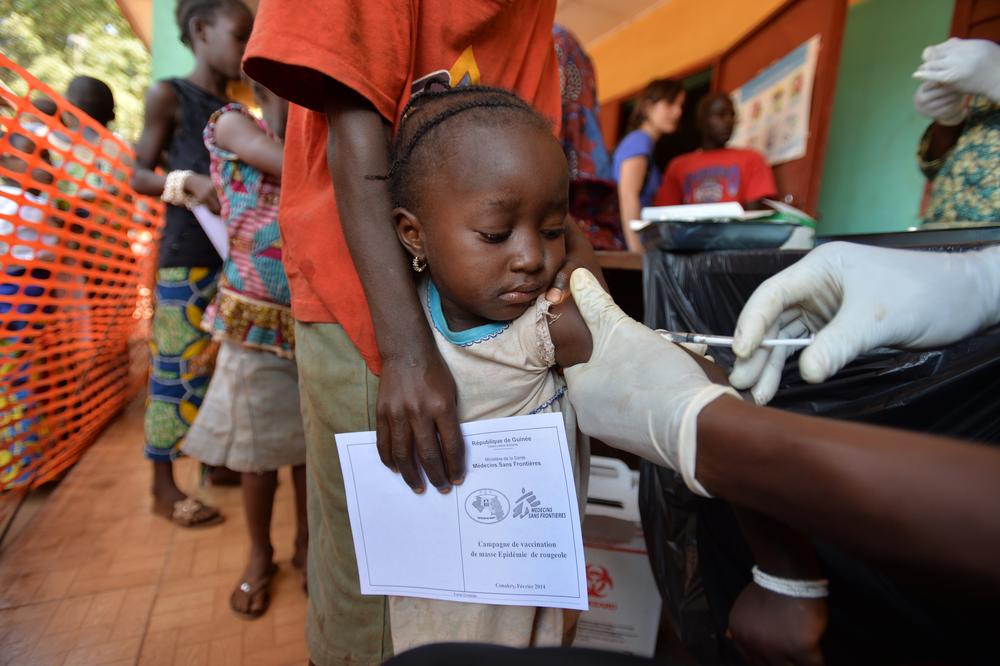 Médecins Sans Frontières/Doctors Without Borders (MSF) today called on pharmaceutical companies GlaxoSmithKline (GSK) and Pfizer to slash the price of the pneumococcal vaccine to US$5 per child in developing countries, ahead of a major vaccination donor conference in Berlin.

Today, MSF released the second edition of its vaccine pricing report, 'The Right Shot: Bringing Down Barriers to Affordable and Adapted Vaccines', which shows that in the poorest countries, the price to vaccinate a child is now a colossal 68 times more expensive than it was in 2001, with many parts of the world unable to afford new high-priced vaccines like that against pneumococcal disease, which kills about one million children each year.

We need your help. We’d like you to help fill the gaps on vaccine prices around the world. While some governments fully subsidise the cost of the vaccine, others cannot afford it. If you know how much parents pay to receive the pneumococcal vaccine in your country, let us know by filling in this quick form on theguardian.com.

“The price to fully vaccinate a child is 68 times more expensive than it was just over a decade ago, mainly because a handful of big pharmaceutical companies are overcharging donors and developing countries for vaccines that already earn them billions of dollars in wealthy countries,” said Rohit Malpani, Director of Policy and Analysis for MSF’s Access Campaign.

“Donors will be asked to put an additional $7.5 billion dollars on the table to pay for vaccines in poor countries for the next five years, with over one third of that going to pay for one vaccine alone, the high-priced pneumococcal vaccine; just think of how much further taxpayer money could go to vaccinate more children if vaccines were cheaper.

“We think it’s time for GSK and Pfizer to do their part to make vaccines more affordable for countries in the long term, because the discounts the companies are offering today are just not good enough.”

The pneumococcal vaccine alone accounts for about 45 percent of the total cost to vaccinate a child today in the poorest countries (the full package includes protection against 12 diseases). GSK and Pfizer have collectively reported over $19 billion in sales globally for the pneumococcal vaccine since its launch.

MSF is therefore urging GSK and Pfizer to reduce the pneumococcal vaccine price to $5 per child (inclusive of all three doses), which is only slightly less than the $6 price target ($2/dose) announced by the Indian manufacturer Serum Institute for a version it plans to bring to market in the next few years.

MSF’s report—one of the only sources of comparative pricing on vaccines available—shines a light on the secretive vaccine industry and the striking lack of data on vaccine prices.

Country health budgets are stretched by high prices because there is limited information to inform negotiations with companies, industry purposely conceals prices, there is a lack of market competition, and pharmaceutical companies charge wildly different prices in different markets for the same product.

“We have an irrational situation where some developing countries like Morocco and Tunisia are paying more for the pneumococcal vaccine than France does,” said Kate Elder, Vaccines Policy Advisor for MSF’s Access Campaign.

“Because of the astronomical cost of new vaccines, many governments are facing tough choices about which deadly diseases they can afford to protect their children against.”

More than a quarter of the countries currently eligible for donor support through Gavi, the Vaccine Alliance will lose it starting next year, after which they will be left to pay about $10 per child for the pneumococcal vaccine, which is unaffordable for many countries.

Gavi estimates that when countries lose access to Gavi’s $10-per-child price, they could end up paying six times as much for the pneumococcal vaccine.

Angola is one country that will lose donor support in less than a year – in 2014, more than half of Gavi support for new vaccines in the country went to pay for the pneumococcal vaccine alone.

“Governments need to put pressure on companies to offer better prices to Gavi and the countries it supports,” said Elder.

“We need to put public health before profit—life-saving vaccines for children shouldn’t be big business in poor countries.

“In one week, donors will gather in Berlin to pledge more money for vaccination, so we’re asking GSK and Pfizer to hurry up and cut the price of the pneumococcal vaccine before then.”

Morocco pays US$63.70 and Tunisia $67.30 for the pneumococcal vaccine (PCV), while France pays $58.40. Morocco and Tunisia prices are those paid in hospitals and public institutions; France’s price is the manufacturer price (before it enters the wholesale and retail distribution network).

Prices quoted are for Pfizer’s PCV13. This data is published in MSF’s new report, 'The Right Shot: Bringing Down Barriers to Affordable and Adapted Vaccines', a landscape analysis of vaccine accessibility.

Each year, MSF teams vaccinate millions of people, largely as outbreak response to diseases such as measles, meningitis, yellow fever and cholera. MSF also supports routine immunisation activities in projects where we provide healthcare to mothers and children.

In 2013 alone, our programmes delivered more than 6.7 million doses of vaccines and immunological products. MSF is scaling up its vaccination activities with a particular focus on improving its work in routine immunisation, as well as extending the package of vaccines used in humanitarian emergencies. In the year 2012–2013, MSF had a 60 percent increase in the number of doses administered in its projects.