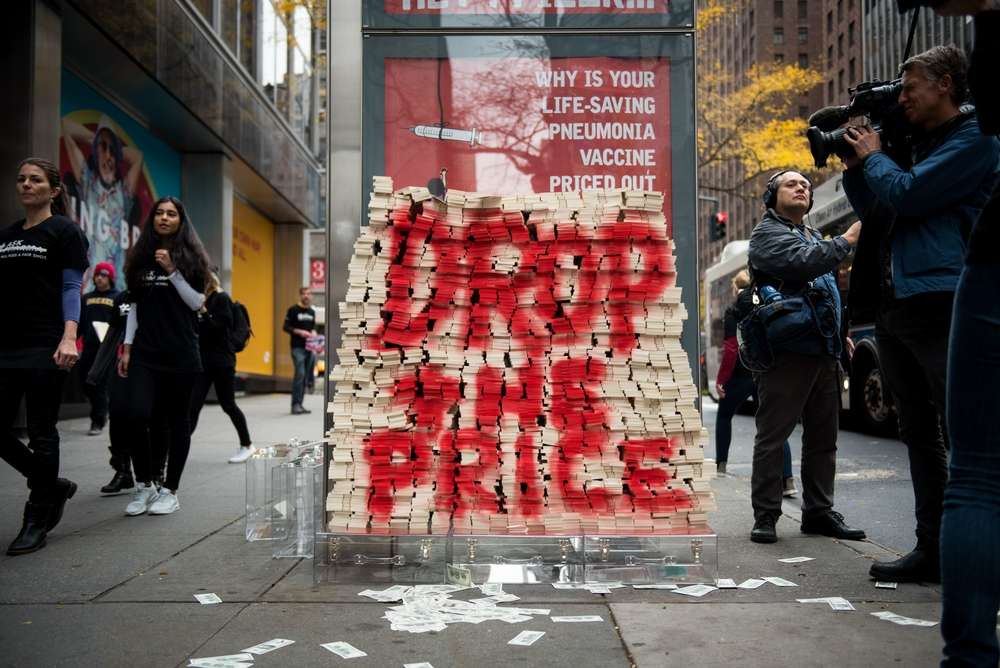 MSF has today delivered a petition of almost 400,000 signatories to GlaxoSmithKline's headquarters in London.

Médecins Sans Frontières/Doctors Without Borders (MSF) has today delivered a petition of almost 400,000 signatories to GlaxoSmithKline's (GSK) headquarters in London.

The petition demands that the two pharmaceutical companies who produce the pneumonia vaccine, GSK and Pfizer, reduce the price to US$5 per child in all developing countries and for humanitarian organisations.

Despite there being a vaccine that can prevent pneumonia, it remains the leading global cause of childhood death, killing almost one million children under the age of five each year.

#TBT to MSF’s 2013 vaccination campaign in the Yida refugee camp in South Sudan. We’re asking Pfizer and GSK to lower the price of the pneumonia vaccine to $5 per child. Sign the petition using the link in our bio. #MSF #DoctorsWithoutBorders #SouthSudan #AskPharma #Pneumonia #Vaccination #TBT #ThrowbackThursday © Yann Libessart

“Millions of babies and young children around the world are left unprotected against pneumonia because GSK and Pfizer charge such high prices for the vaccine. Many governments and humanitarian organisations can’t afford it,” said Dr Greg Elder, Medical Coordinator for MSF’s Access Campaign.

“After combined sales of more than $30 billion for the pneumonia vaccine alone, we think it’s pretty safe to say that GSK and Pfizer could find the money to lower the price, so all developing countries can protect their children from this killer.

“MSF has seen too many children die of pneumonia, and we’re not going to stop until we know that all countries can afford this life-saving vaccine. It’s tremendous to see that nearly 400,000 people globally have joined us to tell Pfizer and GSK they must drop the price so more children’s lives can be saved. What’s the point of a life-saving vaccine if the most vulnerable people can’t afford it?”

MSF delivered the petition to the GSK headquarters via an undercover delivery person, who had a large suitcase filled with 16 over-sized syringes. Each syringe was addressed to a GSK board member and contained a copy of MSF’s petition, sending a strong signal to GSK’s CEO, board and shareholders that the company should not put billions of dollars in profit over children’s lives.

MSF also delivered the petition in person to the Pfizer Global headquarters today in New York. During a stunt outside the office dozens of people placed flowers at the company’s door. One flower was laid in front of Pfizer’s front door for every child lost to pneumonia each day, resulting in 2,500 flowers.

In addition, reams of paper with the names of almost 400,000 people from 170 countries who signed MSF’s petition lay in an empty baby cot.

The governments of more than 50 countries have underlined the rising inequality among them caused by the increased financial burden of new vaccines. Many have stated that the high price of new vaccines, such as the pneumonia vaccine, either prohibited them from introducing it or threatened their ability to maintain it in their routine immunisation programmes.

Countries such as Algeria, Bosnia, Egypt, Indonesia, Jordan, Thailand, and Tunisia, among others, have expressed that they are not able to introduce the pneumonia vaccine because of its high price.

MSF has vaccinated children with the pneumonia vaccine all over the world, but after more than five years of struggling to get Pfizer and GSK to sell the vaccine at an affordable price, MSF last year decided to launch its ‘A Fair Shot’ campaign and public petition to push the companies to reduce the price of the pneumonia vaccine to $5 per child.