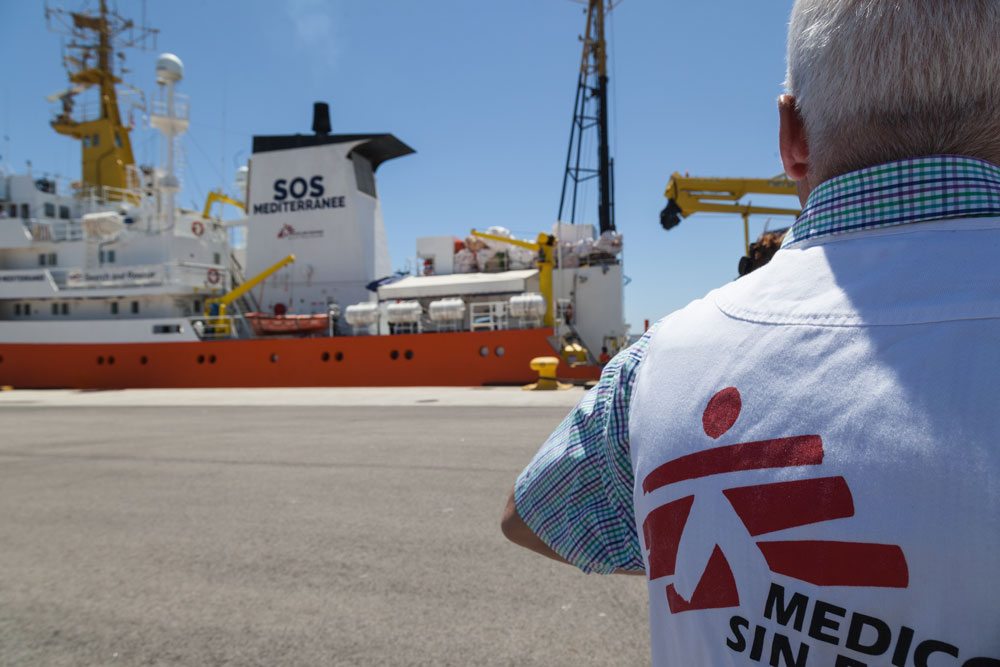 MSF: Saving lives at sea is not a crime

Amsterdam, 29 June 2018 – European governments must come to their senses and end policies which trap extremely vulnerable people in Libya or leave them to die at sea, said the medical humanitarian organisation Médecins Sans Frontières/Doctors without Borders (MSF), as governments gather for the European Council Summit today.

Last week was the deadliest so far this year on the Mediterranean, as at least 220 people drowned. These were avoidable tragedies. European Governments have blocked non-governmental search and rescue operations, while turning over responsibility for rescues to the Libyan coastguard.

European governments are financing, training and equipping the Libyan coastguard to intercept boats in distress and return them to Libya, where they are held in inhumane conditions. In an unprecedented development some 2,000 people were returned to Libya over the course of last weekend. Upon arrival they were sent to arbitrary detention, with no due legal process.

The same European governments that were just a few months ago strongly condemning reports of slave markets in Libya, seem today to have no hesitation in escalating policies that will increase the suffering of people trapped there. People whose only ‘crime’ is that they flee conflict, violence or poverty.

“EU member states are abdicating their responsibilities to save lives and deliberately condemning vulnerable people to be trapped in Libya, or die at sea” said Karline Kleijer, MSF head of emergencies “They do this fully aware of the extreme violence and abuses that refugees and migrants suffer in Libya.”

“MSF urges European governments to show some basic decency and remember that we are talking about human lives and human suffering. They can start by committing to search and rescue and facilitate swift disembarkation in places of safety, this does not mean Libya”.

People trapped in Libyan detention centres are largely without any assistance, as access for international humanitarian organisations, including MSF as well as for the UN is severely limited, affecting the ability to monitor and provide protection. Over the last month MSF has, however, conducted over 3,300 medical consultations in four detention centres. Medical teams found that the main health issues are linked to poor living conditions, including overcrowding, and lack of sufficient water or sanitation.

Meanwhile despite the overwhelming need for search and rescue, an orchestrated campaign against non-governmental search and rescue operations is reaching breaking point. Independent search and rescue missions are increasingly obstructed from carrying out rescues in international waters and are denied access to local ports. This weekend the Aquarius was one of the only three dedicated search and rescue vessels in the Central Mediterranean.

“Saving lives at sea is not a crime” continued Kleijer. Yet, the message from European governments is loud and clear: humanitarian assistance is not welcome. Scapegoating NGOs is a tactic to distract from the real issues: lack of solidarity or vision in the EU, and a broken asylum system. These actions block and obstruct us from doing the work EU governments are failing to do, all the while de-humanising people in need. Any deaths caused by this are now at their hands.”