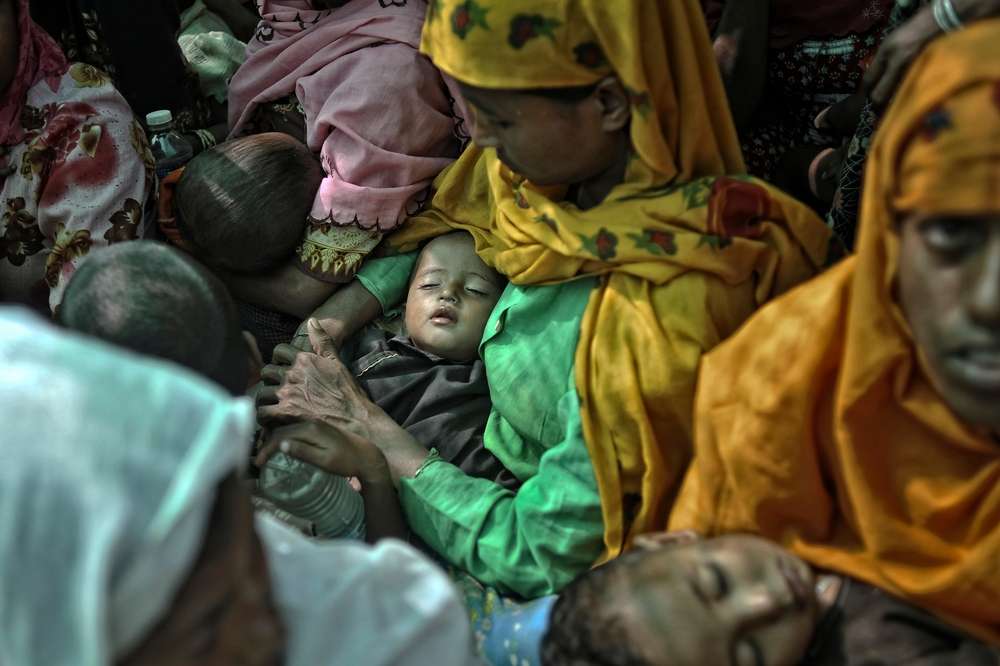 Médecins Sans Frontières/Doctors Without Borders (MSF) calls on government authorities and community leaders to ensure that all people of Rakhine can live without fear of violence, abuse and harassment, and that humanitarian organisations can assist those most in need.

Since the June and October outbreaks of violence communities that were previously living side-by-side, or even mixed, remain deeply divided. Thousands of people have lost their homes and are living in makeshift camps, cut off from health care, clean water and basic provisions. According to official estimates, the vast majority of the displaced are a Muslim minority – often referred to as the Rohingya.

A sick child sleeps in his mother's arms while waiting for the malaria screening test result at MSF clinic in a refugee camp on the outskirts of Pauktaw township, February 3, 2013. © Kaung Htet

“It is among people living in makeshift camps in rice fields or other crowded strips of land that MSF is seeing the most acute medical needs” said Arjan Hehenkamp, MSF’s General Director.

“Ongoing insecurity and repeated threats and intimidation by a small but vocal group within the Rakhine community have severely impacted on our ability to deliver lifesaving medical care.”

“We are very worried about our women; we have more than 200 pregnant women in our camp," said a man living in a displaced persons camp in Pauktaw Township, Rakhine State.

"For their delivery they cannot go to a health centre and they will have to deliver here… in the mud without a doctor.”

Skin infections, worms, chronic coughing and diarrhoea are the most common ailments seen through more than 10,000 medical consultations in the camps since October.

Malnutrition rates vary, but in several camps MSF’s rapid screening shows alarming numbers of severe acutely malnourished children. Although clean water is often available in sufficient quantities, some of the displaced are denied access to it.

“The only drinking water pond we have is the one which we have to share with the cattle of the nearby village. Five minutes from here is a pond with crystal clear water. We don’t dare to go,” man living in a displaced persons camp in Pauktaw Township, Rakhine State.

While the needs remain acute, MSF medical teams face continued threats and hostility. In pamphlets, letters and Facebook postings, MSF and others have been repeatedly accused of having a pro-Rohingya bias, by some members of the Rakhine community.

It is this intimidation, and not formal permission for access, that is the primary challenge MSF faces. The authorities can, however, do more to make it clear that threatening violence against health workers is unacceptable.

“Our repeated explanations that MSF only seeks to provide medical aid to those who need it most is not enough to forestall the accusations,” continued Hehenkamp. “MSF urges supportive community leaders and government authorities to do more to counteract the threats and intimidation so that humanitarian aid can be delivered to those who urgently need it.”

MSF has been providing healthcare around the world and in Myanmar for decades meeting the medical needs of millions of people hailing from countless ethnic origins. Across Myanmar, MSF provides more than 26,000 people with lifesaving anti-retroviral treatment for AIDS and was amongst the very first responders to cyclones Nargis and Giri providing medical assistance, survival items and cleaning water sources for tens of thousands of people.

MSF has worked for the past twenty years in Rakhine State providing primary and reproductive health care as well as HIV/AIDS and TB treatment. Prior to June, MSF had been conducting approximately 500,000 medical consultations annually. Since 2005, MSF has treated more than 1.2 million people from all ethnic groups in Rakhine State for malaria.

Visit our Focus Page for more information on MSF's work in Myanmar.

Notes to the editor
(1) In June 2012, deadly communal clashes led to Myanmar’s Rakhine State being placed under an official state of emergency. An estimated 75,000 people were displaced - many of whose homes had been burned down. Further outbreaks of violence in October exacerbated the humanitarian crisis, forcing a further estimated 36,000 people out of their homes and into makeshift camps, which do not have sufficient shelter, water, sanitation, food or healthcare. Hundreds of thousands more of those people still living in their homes, have found themselves without healthcare as medical services were cut off - and in many areas still have not resumed.