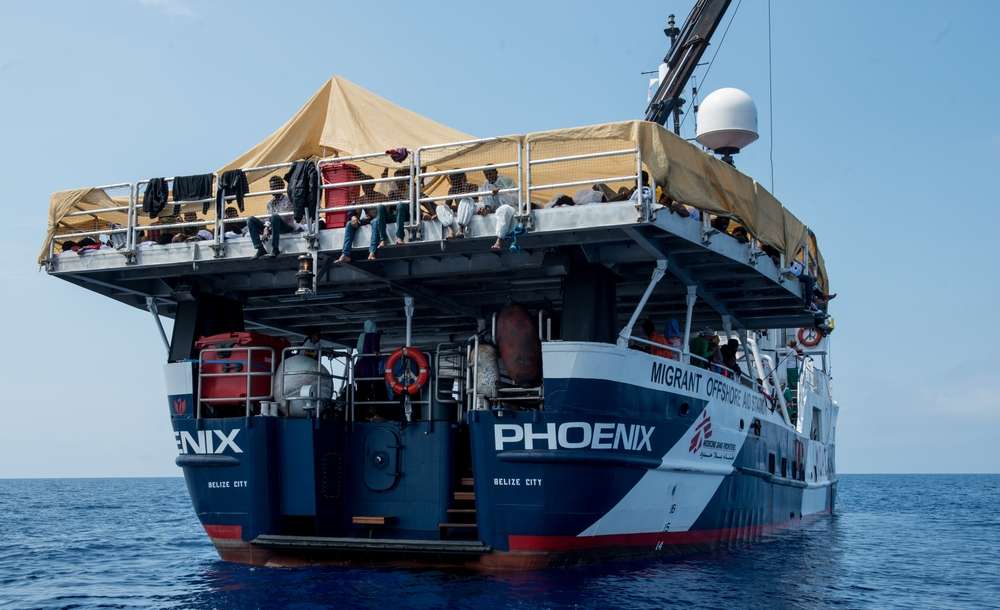 Opinion and debate: Drone Aid: A useful tool with a toxic image

Opinion and debate: Fears grow that MSF has unwittingly become associated with a new drone war that is developing around the ‘search and destroy’ military operations of the European Union in the Mediterranean

Drones do not have a good reputation. The technical advantages of such technology for humanitarian purposes are clear: conflict zones, and difficult to reach places in any disaster, could be well served by accurate assessments of population movements, crop yields, mudslides, flooding to name just a few.

Yet, the word ‘Drone’ is a very generic term for unmanned aerial vehicles of all size and purpose, ranging from small helicopter type vehicles the size of a hand to enormous airplane type unmanned vehicles like the US built ‘predator’ drones. Unfortunately the latter, ‘predator’ image is what many have in mind when the word ‘drone’ is mentioned.

MSF has dabbled with the use of some drone equipment in Liberia during the Ebola outbreak, the Philippines and Papua New Guinea, far away from the area of deployment of the feared ‘predator drones’, and mostly in a low profile manner.

However, this low profile use of such technology recently changed when MSF started a project on the Mediterranean rescuing people attempting to seek refuge in Europe by boat. MSF – unwittingly – became associated with a new drone war that is developing around the ‘search and destroy’ military operations of the European Union in the Mediterranean.

Humanitarians as a magnet for lethal drones

One of the frequent reasons armed groups in contemporary conflict are reluctant to give access to foreign aid workers is the fear that the foreigner will attract a drone strike. This is not new, ever since technology has advanced this fear was a factor, from the laser-guided Russian rockets in Chechnya in the nineties, to the cruise missiles in Iraq and Sudan in 2003 and 2004 up to the current crop of drones in Somalia, Yemen and Pakistan.

However, these unmanned attacks, more than any other weapons technology, inspires fear and paranoia, and with good reason. The current drone programme of the United States bypasses all established rules of war. The commander in chief – the President of the United States – is judge, jury and executioner all in one as he orders selected individuals across the globe to be assassinated by a drone attack. No warning, no appeal, and no accountability to the accused or the occasional ‘collateral damage’ - meaning unrelated bystanders killed – would they wish to contest the judgement.

Humanitarian agencies are generally aware of this negative image, and this has slowed down the application of the technology for humanitarian purposes, limiting its use far from the conflict zones, and generally with no or very little publicity. MSF has followed this pattern. Although MSF will resist using the tool in the conflict zones where US predator drones are already circling the sky, there have been some attempts to test its use during the Typhoon emergency in the Philippines. Papua New Guinea is so far the only context where MSF has announced it is using the technology publicly.

Now unexpectedly, unplanned and uninvited, the name of MSF and its logo have been associated with the gathering of military intelligence for a ‘search and destroy’ EU mission against smugglers, and used to market new drones for a military clientele. This development does not seem to be intended: MSF launched operations to rescue people at sea attempting to reach Europe across the Mediterranean.

MSF began this project by partnering as a medical component on an existing search and rescue boat. The partner organisation of MSF, MOAS (Migrant Offshore Assistance Station) was using drone technology to locate boats adrift with migrants, in partnership with a military drone manufacturer SCHIEBEL – whose interest was clearly to reduce negative press about drones: “You know, a lot of people get really upset when they hear about drones, because all you hear about is drones killing people. We wanted to change that dynamic”, said Chris Catrambone from MOAS. It was also a SCHIEBEL drone – the same kind being used by MOAS - that was shot down by the Libyan army in January 2015.

Drone technology – that can gather data on ‘suspicious behaviour’ – can now be used to identify potential ‘terrorists’ and drone targets.  The SCHIEBEL Camcopter-S100 surveillance drone has come under recent scrutiny for its ability to easily be converted into a drone that can fire missiles. This ‘Camcopter’ is one of the most prolific drones in the world, serving in at least 11 militaries.

Initially the MOAS website proudly displayed the partnership with MSF alongside the logo of SCHIEBEL and a Marine oil company as ‘sponsors’ of MOAS. This has since been rectified. However the partnership stands, and MOAS has been using this new partnership also to promote its association with the drone manufacturer. The founder of MOAS, who owns a insurance/risk management/intelligence company ‘TANGIERS’ in Malta on his blog for MOAS in April published an article called ‘humanitarian drones: bots without borders.’

So far the story could have been an unfortunate blip where the SCHIEBEL/MSF co-sponsoring website was quickly removed, and in discussion with MOAS MSF would be dissociated from the drone aspect of an otherwise quite compatible operation. However, this was not to be. As the MOAS/MSF operations was launched in high profile with invited press on the first tour, some of the Italian and British press reported that data from the MOAS/MSF drone was shared with Italian law enforcement agencies in order to identify smugglers.

Within weeks of its launch, the European Union after a few high profile mass drowning events came together in a crisis meeting to discuss the problem. The outcome was a military one: the EU would concentrate on a policy of ‘discouragement’ by combining an expansion of the ‘search and rescue’ capacity with a military ‘search and destroy’ campaign – where the data from surveillance and rescue operations will be used to target boats and the smugglers in order to deprive them of the means to continue their trade. This decision means that data shared with the EU authorities can now be considered as military intelligence. Combined with the type of drone used – the Schiebel ‘camcopter’, MSF is now the first international humanitarian organisation to be associated with military grade drone equipment in an area of military operation.

This leaves the image of MSF particularly vulnerable. Very quickly the reputation of the small ‘search and rescue’ cam-copter has become one of the many military drones deployed in order to hunt down and destroy people smugglers. The fact that MSF does not pay for the drone, that the MSF logo has been removed from the SCHIEBEL/MOAS webpage, that MSF itself does not give information to the military authorities does not matter if MSF does not very loudly say so. SCHIEBEL continues to market the partnership with MOAS/MSF to profile civilian use for its equipment, whilst MSF stays silent on the issue.

The military association with drone use in the Mediterranean is illustrative of the dangers of drone technology for humanitarian actors in general. Specifically for MSF, the debate is on whether or not the negative image associated with drones means that even the use of small scale drones in Papua New Guinea or the Philippines should be discontinued.  Drones may be very useful, but for humanitarian use, their reputation may just be too toxic for MSF.