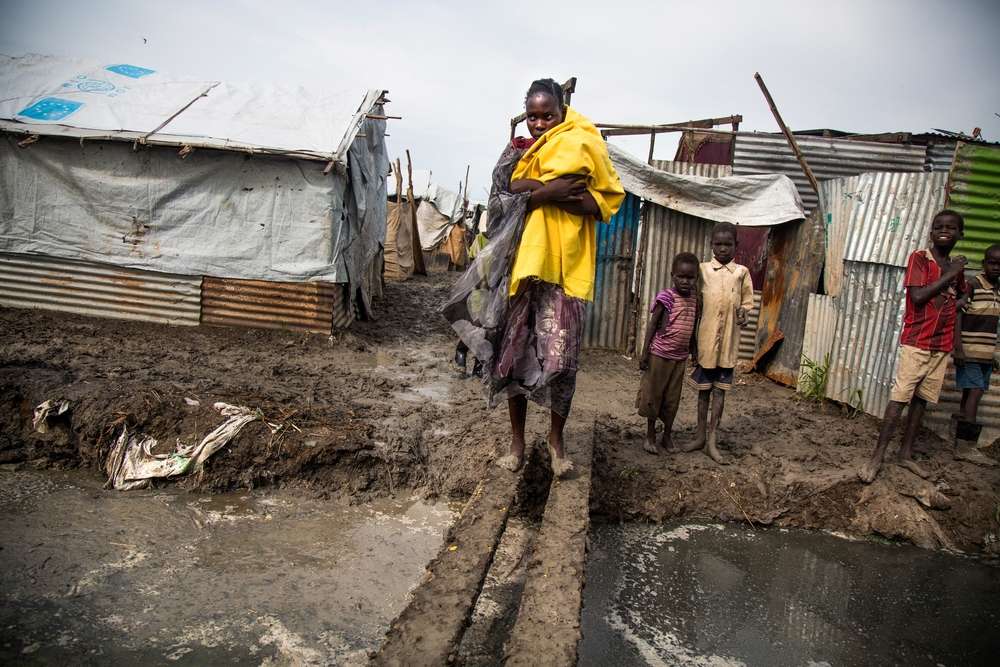 Opinion and debate: If basic life support is a pull-factor, let them come

Protection of Civilian sites in South Sudan need minimum standards like any other displaced persons camp.

Two and a half years since the start of the conflict in South Sudan, approximately 200,000 internally displaced people remain gathered for safety inside UN bases. These have come to be known as Protection of Civilian (PoC) sites, in reference to the mandate of the UN Mission in the Republic of South Sudan (UNMISS) to protect civilians who are under threat of physical violence (1).

Commendably, UNMISS opened its gates during intense periods of fighting early in the conflict, and saved many lives. Since then, however, UNMISS has manifested deep concern that improving services within the PoC sites will create a pull factor which would further entrench them in this extraordinary situation.

Attempts to improve the camps, such as expansion of the sites in order to decongest dangerously overcrowding, and upgrading water, latrines and shelters for new arrivals, have been slow and contested.

This article calls for a clear policy guaranteeing minimum humanitarian standards within the PoC sites (2). These sites, while having the purpose of protecting civilians from violence, are de facto IDP camps and should be treated as such when it comes to minimum standards employed by the aid sector. Peacekeepers, the DPKO and the UN Security Council should respect this and allocate the required resources to ensure it.

The scale on which civilians have sought refuge from fighting in UN bases in South Sudan is arguably unprecedented in the history of the UN’s Department for Peacekeeping Operations (DPKO) (3) but the mission was not prepared to accommodate this population long term.

Mortality rates in the Bentiu PoC site significantly increased following rapid influxes of people in fragile health (5) in both May 2014 and June 2015. Inadequate reception conditions, led to overcrowding and competition for scarce essential services as the health of camp residents deteriorated. Friction between humanitarians and peacekeepers has been cited as a factor that slowed down implementation of minimum standards (6).

Between 30 June 2014 and 6 July 2014, child mortality rates rose above the emergency threshold, with 2.19 deaths per 10,000 children under five each day. This was no surprise as in May and June there were only three to four litres of water available per person per day (instead of the 7.5-15 litres/person/day recommended by SPHERE), and totally inadequate provision of latrines, not to mention other services.

For significant periods of time in 2015, in the most congested areas of Malakal PoC site, families had only five square metres of total living space per person, far below the 30 square metres required by the SPHERE minimum standard (not to mention a complete lack of communal space, including for schools, religious buildings, markets and recreation).

Between June and November 2015, the number of children under five treated by MSF for diseases like malaria and pneumonia increased five-fold, whilst complicated cases of malnutrition also rose significantly (7).

Not only were people been exposed to disease and undignified and dangerous living conditions, but they were not even being protected against attack;large swathes of the overcrowded camp were deliberately burnt to the ground by armed men in front of peacekeepers in February 2016 (8). At least 18 people were killed in the fire (9).

MSF teams in Malakal worked through the nights of 17 and 18 February to deal with injured patients after fighting erupted in the PoC site.

The UN needs to accept that people have no choice but to stay within the PoC sites – even if they are a huge strain on UNMISS resources. Humanitarians have been told that a very small proportion of UNMISS’s assets are available for deployment outside the camps as most are focused on protecting the camps from outside attacks, policing the camps from internal strife, and protecting UN personnel from the population within the camps.

The only clear policy that exists concerning the camps frames them as a measure intended to last 72 hours, stating: ‘In the event that civilians do seek protection at an UNMISS base the mission should avoid providing any unwarranted incentive that might lead to a long-term presence of the civilians or induce a pull factor for further civilians to come to the base.’(10)

UNMISS has maintained a position that the PoC sites are an exceptional short-term measure. Aid actors have been told that the PoC sites are a temporary solution and that, rather than doubling efforts to improve conditions in the camps, the aid community should focus on creating conditions for people’s safe return to their homes.  Sadly, the vast majority of camp residents are not safe to return.

The easiest way forward would be to develop a new policy ensuring that SPHERE standards are met in the PoCs, and to amend the 72 hour policy so it no longer impedes essential aid. SPHERE minimum standards (11)  serve as an adequate technical reference for the management of camp-style mass displacement in an emergency and are widely used as a benchmark in the sector (12).

These standards are not a luxury; they establish absolute minimum benchmarks to reduce morbidity and mortality from preventable disease.

People fleeing violence and seeking protection in the PoC sites in South Sudan should not be forced to choose between staying safe from violence or safe from diseases and the minimum SPHERE standards should never be characterised as a “pull factor” – they are lifesaving.

The PoCs in South Sudan seem like an exceptional situation, but UN peacekeepers may well find themselves protecting displaced camps like this elsewhere in the future.

The UN DPKO, the Department of Field Support (DFS) and humanitarian agencies all have a responsibility to ensure that clear guidance is developed for such scenarios, while the UNSC and its member states must ensure  the resources required(13). Wherever they seek protection, IDPs should, be entitled to the minimum services required to preserve their health and their dignity.

If basic life support is a pull factor, let them come. After all, saving lives is the primary purpose of the UN’s peacekeeping mission.

1. UN Security Council Resolution 2155 of 27 May 2014. The UNMISS mandate is available at: http://www.un.org/en/peacekeeping/missions/unmiss/mandate.shtml

9. MSF mounted a medical response to this tragic event, treating 108 injured patients among whom 46 had gunshot wounds.

12. MSF is not a signatory on the SPHERE project but provided technical input in its development.

13. The issue is addressed in DPKO and DFS (2015) Policy: The Protection of Civilians in United Nations Peacekeeping (New York, United Nations). However, the only real guidance provided is that mission premises only be used in extremis situations, and for as short a duration as possible.