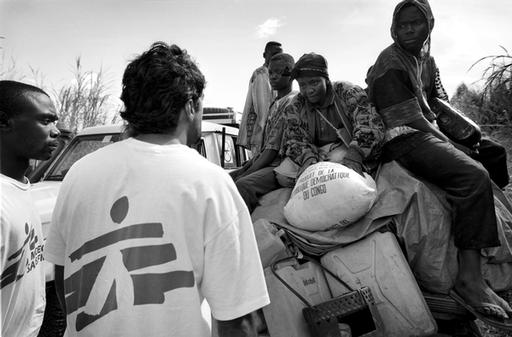 Opinion and debate: Is medical care really under fire? A debate on humanitarian security

Opinion and debate: Michaël Neuman discusses whether the current concern over the security of humanitarian organisations is valid or even new, and under what terms should MSF define their security management?

Is there anything fundamentally new in the security challenges faced by humanitarian organisations? When looking at the history of humanitarian assistance, as far back as the late 1800s, 'medical care' was operating under fire1.

Numerous examples from a recent past indicate that humanitarians were never safe – or protected - by their 'emblems'. Was the Biafra war not famous for having been the stage of numerous attacks on hospitals? If security incidents aren't a new phenomenon, are they more acute and frequent nowadays?

This is hard to tell, and most researchers and practitioners – such as Larissa Fast, Koenraad van Brabant, Arnaud Dandoy to name only a few2 – who have taken time to seriously analyse humanitarian security statistics, point at the limits of this data.

This was a time when most humanitarians were confronted with massive violence against civilians – to which they were not immune themselves.

One needs only to remember the wars in Somalia, West Africa, Chechnya, the African Great Lakes, and former Yugoslavia to understand how the growing concerns for security were totally legitimate.

In fact, when looking back at this 'decennium horribilis', it is difficult to fathom how current years could ever be seen as the worst yet for humanitarians.

If there is one major evolution of humanitarian security to single out, it is certainly in the way security management has been impacted by its "professionalisation".

This includes the advent of a profession of humanitarian security specialists, the proliferation of consulting groups, the normalisation of practices through the dissemination of guidelines – such as the GPR8 first and second editions (2000 and 2010)3 - and the generalisation of security trainings, the growing importance given to the ‘Duty of Care’4,etc.

One of the consequences of this transformation has been a clear centralisation of security management, to the detriment of the autonomy of field staff; another is the development of the 'fortified aid compound', as Mark Duffield calls it5.

And last but not least, we witness a worrying trend to primarily seek the protection of the institution, sometimes at the expense of the individual – most notably through a growing culture of secrecy with regards to security incidents.

All these preliminary remarks don't, however, imply that nothing has changed and that there are no legitimate reasons for concern.

The rise in absolute numbers of security incidents does have a measurable impact on the perception of security – even if the deterioration of humanitarian security in relative terms is much less obvious.

Incidents indeed occur, for a variety of reasons, in the forms of intrusions by armed men in hospitals, attacks on health personnel, robberies and certainly the practice of kidnapping, albeit not new, has never seemed so widespread, while the interconnections between the groups of perpetrators are truly worrying.

However, these threats are relevant to a limited number of countries, and although negotiated access is certainly being challenged, if not virtually impossible in places such as Somalia and Syria, humanitarians have never been more numerous and active in the heart of conflict zones.

While there are indeed evolutions in the contexts that call for particular attention with regard to security, it nonetheless remains the old - somewhat permanent - concerns such as deliberate attacks on health structures or staff, or humanitarian teams being caught up in crossfire, which seem to far outweigh the more recently emerging security concerns.

It is also truly concerning that most discussions around humanitarian security leave no room for a careful and honest reading of why security incidents happen in the first place.

In that regard, the introduction of a World Humanitarian Day following the 2003 bombing of the UN headquarters in Baghdad – and the subsequent "humanitarian hero" Twitter hashtag used for the same event in 20146 – is testimony of a dominant discourse that sees humanitarian workers as helpless victims confronted by harrowing events, manipulation and politicisation of their actions.

But this is a discourse that omits the complexity of the insecurity affecting humanitarians7. Initiatives such as the ICRC’s Health Care in Danger campaign, which sees healthcare workers as being essentially victimised by perpetrators of violence who oppose their neutrality and impartiality, tend to over-simplify a complex reality while over-looking the root-causes of this violence8.

In that regard, when looking at the role of the ‘principles’9 – the definitions of which are much debated – it might actually be worth considering that deliberate non-neutral assistance could keep humanitarians workers safer.

For instance, it is the experience of Médecins Sans Frontières/Doctors Without Borders (MSF) in the 1980s that political embedment – be it in Angola, Eritrea, or Afghanistan – might have brought more protection than working on all sides of a conflict as became the norm in the 1990.

But generally speaking, the axiom according to which ‘principles’ – certainly useful when one attempts to secure a dialogue with warring parties – protect, should be questioned.

A solution to this dilemma?

So, what to do? If all situations and contexts are different, there seems to be space for a small number of orientations to security management – as far as MSF is concerned, at least:

1. Rather than relying on principles and techniques, value engagement with all stakeholders in order to reach acceptable compromises.

2. Relevant and quality programming is not bullet proof, but projects whose design and outcomes alienate as few actors as possible and is of value to as many as possible, certainly improve one’s security environment.

3. Trust individuals rather than the processes. Consider that those in the best position to make informed decisions are those closest to the dangers: namely, the teams in the field.

4. Do not stay at all cost. There are indeed situations where engagement becomes way too close to being synonymous to sacrifice.

[1] Taithe, B O. "The Red Cross Flag in the Franco-Prussian War: Civilians, Humanitarianism and War in the 'Modern' Age." In Medicine, War and Modernity, Stroud: Sutton, 1998.

[4] See for instance, Kemp. E and Merkelbach M. (2011). Get you can sued. Security management initiative. http://www.gcsp.ch/Emerging-Security-Challenges/Publications/GCSP-Public...

[7] See Fast L. 2014. Aid in Danger. The perils and promise of humanitarianism. University of Pennsylvania Press.

[8] http://www.abc.net.au/worldtoday/content/2014/s4128626.htm. For an MSF presentation of the issues at core of the Medical Care Under fire, see Attacks on medical missions: overview of a polymorphous reality: the case of Médecins Sans Frontières, International Review of the Red Cross, No. 890, by Dr Caroline Abu Sa'Da, Dr Francçoise Duroch and Dr Bertrand Taithe.