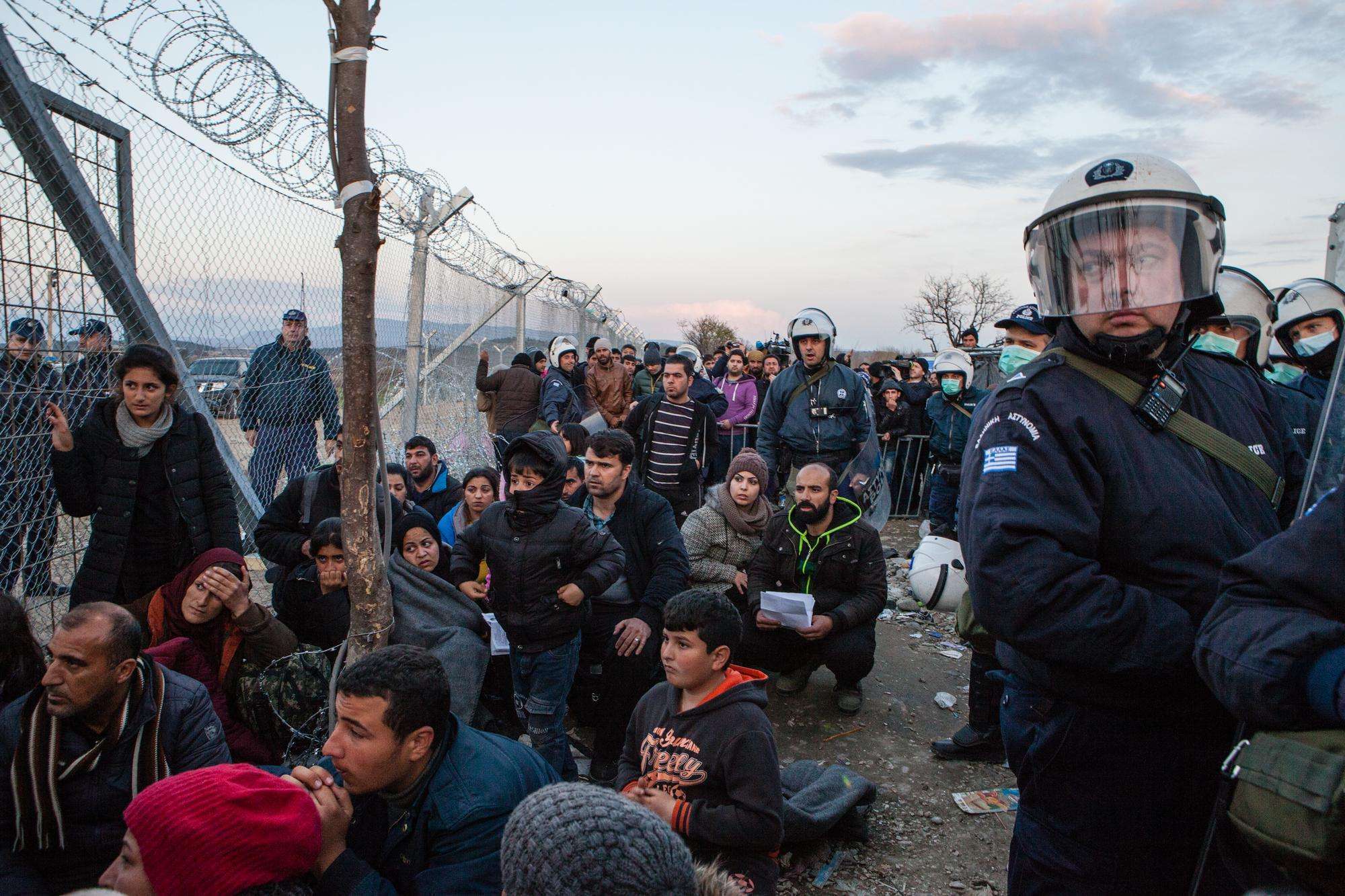 Opinion and debate | MSF suspension of EU funds: The evolution from financial opportunism to consistency of principles

Michiel Hofman argues that MSF's decision to suspend all EU funding is consistent with the historical evolution in MSF, from financial opportunism to a more consistent application of its humanitarian principles.

As MSF had massively scaled up its medical and humanitarian response for migrants and refugees in Europe, including an unprecedented search and rescue operation on the Mediterranean, MSF witnessed the consequences of these restrictive policies first hand as documented in the Obstacle Course to Europe report MSF released earlier this year.

Furthermore, with Kenya justifying their decision to close Dadaab refugee camp as a replication of the EU policies, the right to seek refuge and apply for asylum seems to be under threat globally.  Finally, the EU is already in negotiations with a host of other ‘migrant generating’ countries for agreements similar to the one with Turkey.

As a subtext to this main message, MSF also announced that it would suspend any funding from the EU, its Member States and Norway, as a consequence.

Unsurprisingly, this second message became the headline and the hook used by journalist reporting on MSF’s objections to Europe’s migration policies. Such a decision may look straightforward, but was and is subject to fierce debate within the organisation.

Naturally this type of decision for an organisation with its multiple operational head offices all based in Europe, staffed by a majority of European nationals, is very close to the bone. But that is valid for the decision to denounce the restrictive migration policies as well, a message that will have limited public support in the European home societies.

The debate about the funding relation however is more controversial, and a historical perspective is necessary to put the current decision making in perspective.

MSF, like any other aid organisation, started out mostly, and initially exclusively dependent on state subsidies. At the start this was the French government, not only financing but even contracting the first batch of MSF doctors in the field.

Ironically, since those humble beginnings MSF had already severed the funding relation with the French state long before the decision on the whole of the EU was taken.

As MSF spread through Europe, the state financing diversified with it to other – then EEC – member states and later the EU’s dedicated ‘humanitarian’ agency ECHO.

This state aid dependency was always an uncomfortable relation, as it is obvious that states act first and foremost in their own interest, as their primary responsibility is to govern on behalf of their own country and its citizens. As a result, MSF in its first few decades of existence aspired to be independent, but realised it was curtailed in this ambition by its financial ties.

The crisis in former Yugoslavia between 1993 and 1995 is a prime example of this dependency: European countries, at the forefront ECHO, poured so much money into humanitarian aid for this conflict on their doorsteps, that aid agencies, including MSF, became financially dependent on continuation of these projects.

Roughly 25 percent of the annual turnover of MSF was related to Bosnia, whilst it contained less than a few percent of refugees and war victims globally.

Project choices clearly followed the finance, not exclusively the medical need. This constraint was recognised in 1995 when MSF, as an international movement, held its first of so far two ‘policy summits’ in Chantilly, France. The closing document agreed at the end contained this decision on financing:

“The concern for independence is also financial. MSF endeavours to ensure maximum of private resources, to diversify its institutional donors, and, sometimes, to refuse financing that may affect its independence.” (Chantilly, Chapter 5, 1995.)

That decision had a profound effect on the evolution of MSF’s funding structure. Investment in private fundraising was massively increased, leading to what was a 50 percent dependency on government contracts in 1996 to less than 10 percent today.

The second part of the decision was also implemented, mostly on a case-by-case basis refusing donor countries that also have ‘boots on the ground’ with military interventions, and most famously the decision to suspend all financing from the US Government in 2004.

To date, this suspension of US money is still valid, and still explained on the MSF USA website on the following basis:

‘The US government is often involved in many crises to which MSF responds. It is important that we remain independent from these—and indeed any—government agendas or political positioning in order to be perceived as neutral, lest we hurt MSF’s ability to operate a programme and/or secure the safety of our staff.’

The decision on suspension of EU and EU Member State funds could be described in similar terms, so at least appears consistent with previous state aid suspension decisions.

Less known, but equally pertinent following Chantilly was a decision to establish criteria of countries where MSF can develop fundraising activities – public or private – which is now defined as countries that have a reasonable freedom of speech and freedom of association.

In short, general government policies determine if MSF is prepared to take their money. This policy is the reason why MSF does not accept money from countries like Russia, Turkey or Saudi Arabia.

Still, there is unease in MSF on what can be explained as a logical continuation of the Chantilly decision and previous restrictions on ‘acceptable’ government funding.

Part of the argument is that the conditionality in the EU-Turkey deal of aid in exchange for border control is not explicit in the EU member state and ECHO humanitarian financing contracts.

USAID had conditions of vetting of staff and which drugs companies could be procured from, yet the EU member state and ECHO funding has no contractual strings attached.  As MSF already refused money from the EU and its member states for its projects in Europe and Turkey, so why refuse their money globally?

The short answer is probably ‘because we can’. Neither the Chantilly policy, nor the existing refusal of Russian, Turkish or Saudi money has a criterion of explicit restrictions within the actual financing contracts.

This is only the case for USAID, and even on the MSF USA website justification is only cited as a secondary concern.

Twenty years ago MSF may have wanted to apply its principles as rigorously as it does today, but financially it was not able to do so with a 50 percent dependency. Today, where financially MSF can function without any government contracts, it is possible to do so. No medical projects will be closed or reduced as a result of this suspension.

The EU’s migration containment policies are nothing new – first infamously coming to light in 2004 as one of the core conditions of Tony Blair’s ‘dirty deal in the desert’ with Colonel Ghaddafi.

In return for restoring full diplomatic relations, Libya was required to block would be migrants heading for Europe, with the EU financing detention camps in the Libyan Desert. The signing of the agreement between the EU and Turkey however, made the link between humanitarian financing and containment explicit.

Money – no less than six billion Euros – is at the heart of the deal. Whilst the EU is not a humanitarian organisation, ECHO most certainly is by virtue of the ‘H’ in its acronym. And it is ECHO responsible for one billion of this containment money spent in Turkey.

At a time where the EU is negotiating a similar containment deal, including the humanitarian aid incentives, with many other countries, MSF can no longer assume that the money spent in South Sudan, Kenya or Central Africa does not have the same containment objective explicitly at its core.

Finally, there is unease about the viability of such a suspension. What if MSF suddenly needs money, and has to crawl back on its knees to the Brussels honeypot?

The two biggest historical drops in percentage of government funding have come after the Tsunami and now after Ebola. The other sudden emergencies are outbreaks of conflict.

Conflict is also where in almost all cases MSF refuses government funding because of military involvement of EU members and other Western states, which makes government contracts not an option anyway to finance such medical projects.

Nobody can predict the future, so there is no certainty it won’t happen, but the evolution of MSFs finance over the last 40 years suggests that the likelihood of such a U-turn is negligible.

But is it also arrogant in the eyes of the Syrian people now stuck at the borders of Jordan and Turkey, or the millions in the camps around Syria that are told by the EU states that they should be happy to stay there with some cash thrown their way?

In their eyes, arrogance may be seen in preaching principles of independence and impartiality, yet take the money that defies those principles.

The question came up if this means that private donors, who agree with the EU policies, should be refused too. Besides the impractical notion of a ‘thought-police’ that would be required to implement such a scheme, there is a difference between an opinion and a policy.

Individual citizens don’t have the power to refuse asylum, close a border, deport people or launch a search and destroy campaign against smugglers. States have the monopoly on ‘legal’ violence.

Citizens can make their own choices to support that state by voting (if they are lucky), and choices which charity they support or not.

This is already happening following the statement: some people have cancelled their support for MSF, whilst others have joined as MSF donor explicitly in protest or support of this decision.

The decision to refuse EU cash is certainly a moral statement. The charter of MSF proclaims principles of neutrality, independence and above all impartiality. By definition principles are a moral application, rules MSF chooses to adhere by.

This is nothing to be ashamed of. MSF judges that EU and its member states funding policies erode asylum obligations and breach impartiality by explicitly making humanitarian aid a tool for border controls.

This implies that upholding impartiality requires refusing this money. Proclaiming principles and then compromising on them when you don’t need to is inconsistent.

MSF has not been exempt from the humanitarian systems history of dependency on states, and has always realised this came with compromises on the principles.

This financial opportunism at its inception however, does not oblige MSF to continue to compromise its self-proclaimed principles when it no longer needs to do so.

Gradually, as MSF gained financial independence, these principles have been more consistently applied in refusing US money, refusing state funding in most conflicts, and now with the decision to suspend EU funds.

This is a logical evolution from financial opportunism to consistency of principles.