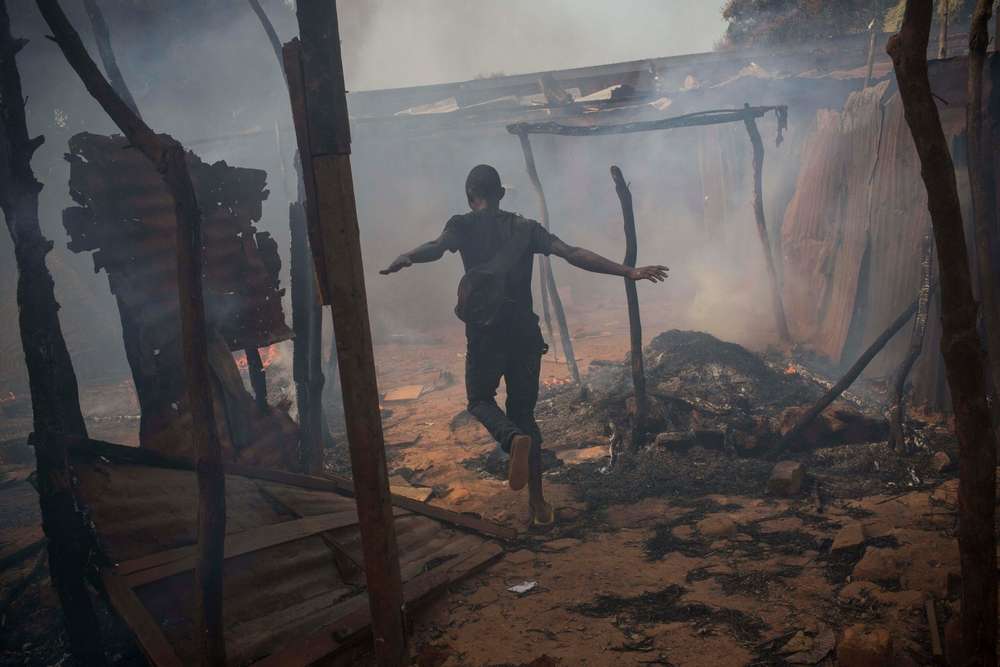 Opinion and debate: Questions around a forced exodus

Opinion and debate: Michaël Neuman and Delphine Chedorge ask whether MSF was auxillary to a criminal process in Central African Republic, when a whole community was emptied from the country.

For a few months now, the world’s response to the organised expulsion of the Muslim community out of the Central African Republic (CAR) can best be described as strikingly mute.

The expulsions, which are in particular taking place in Bangui, the capital city, and the Western regions, are set against a backdrop of a total absence of law and order in the country. This movement is accompanied by high levels of violence directed against a community whose choice is reduced to “leave or die.”

In parallel, the humanitarian assistance to the population in general, and to the displaced persons in particular, is limited in Bangui and virtually inexistent in the rest of the country. The entire population of CAR continues to suffer from the state of dereliction of the state apparatus as well as the country’s infrastructure at large.

These dramatic events are unfolding with a complete absence of political positioning from the country’s government, the governments of the countries in the region, the United Nations, and the state most involved in the management of the crisis: France.

And there have been surprisingly insubstantial reactions to the flight of the Muslims – while it clearly stands as an event of unprecedented proportion in the country. This note gives a background to the response of Médecins Sans Frontières/Doctors Without Borders (MSF) in the country and highlights some of the difficult questions that has accompanied this response.

In Bangui, trucks and planes from the International Organization for Migration (IOM), the National Chadian Army (ANT), and private companies have organised the logistics of the exodus of thousands of Muslims from transit camps.

Other neighbouring countries have been involved in the evacuation of their nationals: Nigeria, Mali, and Cameroon. In Bangui, the Fula are often left behind while in the west, they are regularly attacked and their cattle stolen.

In the towns of Bossangoa, Bozoum, Bocaranga, and Mbaïki, dozens of thousands of Muslims have fled, either spontaneously or taking advantage of convoys to Chad, protected by the Chadian army and the International Support Mission to the Central African Republic (MISCA).

MSF employees with Muslim background have all left the country. In total, it is estimated that over 150,000 people have fled.  Testimonies collected by MSF teams in Chad testify to the brutality of this process: many people have died, either by suffocation due to overcrowding or because they fell of the trucks and got massacred as soon as they touched the ground. Many families have been separated. But they had little choice.

Access to care for the Muslim displaced population is extremely hazardous: many refuse to go the hospitals due to the extreme danger associated with making such a trip. On occasions, Muslim patients referred to MSF-supported hospital have lost track of their family and have no place to return to.

MSF medical teams have been present in CAR since 1997. Already in 2011, MSF warned about the steady deterioration of the health situation and the appallingly weak response by national, as well as international, actors.

Since then, the organisation has sought to develop its operations in the country, even more so after the increase in the level of violence after the take-over of Bangui by the alliance of rebel militia factions, the Séléka, in March 2013. MSF has built a very dense network of around 20 projects in 15 locations. There are today more than 2,000 employees – including more than 1,000 medical staff – working for MSF in CAR.

But, within the organisation, these developments have been accompanied by a range of questions raised in relation to the deployment of international forces after December 2013 and the role of NGOs in a situation that is tantamount to ethnic cleansing.

When increasing its presence in the west of the country in the month of January 2014, at the peak of forced exodus of the Muslims, the MSF teams could see how the presence of just a handful of soldiers from MISCA or from Sangaris, the French Operation, had a deterrent effect in places such as Bozoum or Yaloke.

They felt that only additional troops would enable the Muslim population to be protected. No one wanted to witness scenes such as the one in Carnot where, in February, the MISCA unit had to choose between protecting the church where many had sought refuge and the houses the Muslims had not yet left.

But the call for additional troops did not go without debate. In particular, within the organisation, some questioned the relevance of a call for additional troops when the French troops were partly responsible for the sudden and massive inversion of the military balance of power in a way that was clearly detrimental to the security of the Muslims.

Indeed, the French intervention, directed against the Séléka forces, all but left the Muslim community without the limited protection that they previously had. In addition, for MSF, the aim of humanitarian action is to contain the violence of war, with the implication that it cannot justify new forms of violence. It stands firmly against calling for arms.

Was CAR different? The proximity of MSF teams to the violence was quite exceptional. In addition, as far as protection of civilians is concerned, the positive outcomes of military deployments close to the locations where Muslims were regrouped could clearly be seen. Should one consider that the French troops were responsible for mitigating the consequences of their own actions?

Some within MSF questioned the role of the organisation in the organisation of the exodus. Were we becoming auxiliary to a criminal process by which half of the country would be emptied of a whole community?

Thousands of Muslims are still held captive in enclaves, in schools, churches, and mosques, in Bangui as well as in towns such as Carnot, Boda, and Gadzi and, up until very recently, Bossangoa.

There, they survive under the protection of the international forces of Sangaris and MISCA, and are at risk of being killed as soon as they dare stepping outside. In the premises themselves, they live at risk of being attacked.

No one seems able to draw up a plan for the future for this population, who seems in its vast majority to want to leave. What role should MSF play in such a situation?

How should MSF describe and qualify such a situation? What was happening exactly? An exodus? A deportation? Ethnic cleansing? Crimes against humanity? Acts of genocide? It is important for an organisation such as MSF to describe what it sees – first of all because it is part of the context analysis that will define the operational response, and second because some qualifications will impact on the legal obligations of the parties.

But in Central Africa, the organisation lacked a cohesive answer to these questions. It was also reluctant to paint the conflict as being “religious,” by fear of over-simplifying the narrative. But one can wonder whether this carefulness has not contributed to an under-qualification of the situation up until March this year.

Fortunately, for a humanitarian worker, proximity to extreme violence is exceptional. When it happens, it comes with a set of questions – each of which is sensitive and difficult. No one should pretend they are easy to answer, in particular at times when the capacity of the aid system is clearly overwhelmed.

This article first appeared in PHAP on 28th April 2014