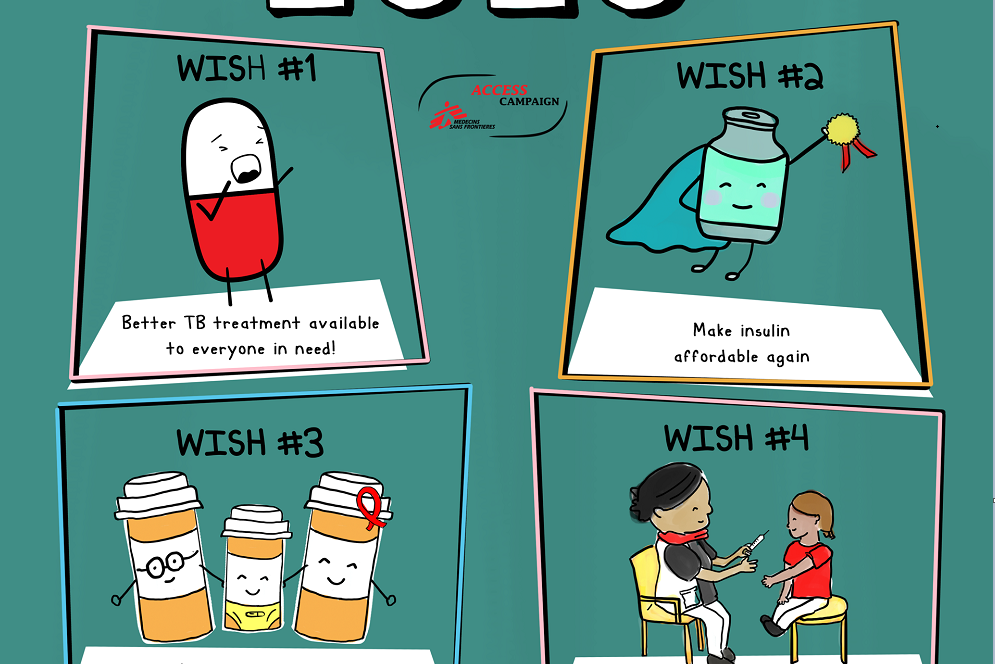 The Access Campaign is an international project within MSF. The Campaign supports MSF’s work by advocating for improved access to treatment and the development of better medicines. Get more information through this website: www.msfaccess.org

Wish #1 Better TB treatment available to everyone in need

When MSF first started treating people with drug-resistant tuberculosis (TB), we only had older medicines that were not an effective cure for people with resistant forms of TB, and caused severe side effects for patients.

Today, following years of advocacy alongside the TB community, we now have safer and better treatments to offer people with drug-resistant TB. But manufacturers have put such a high price tag on the individual medicines that make up the treatment combination that they aren’t affordable to everyone in need.

But these treatments were not developed by pharmaceutical corporations alone—they are the result of years of collaborative work by researchers, clinicians and health care providers, mostly funded publicly. Yet decisions over price and access remain in the control of the drug corporations, leaving many people with TB shut out of lifesaving treatment.

The scientists who discovered insulin exactly one hundred years ago were given the Nobel Prize for Medicine, not just for their discovery, but because they chose to sell the rights to the medicine for just US$1, in the spirit of making insulin accessible to everyone in need.

But over the past century, three corporations moved in to dominate the insulin market almost exclusively and they have abused their monopoly position to drive up prices in some countries, year after year. Today more than half the people who need the medicine, can’t actually get it.

20 years ago, people in developing countries were dying of AIDS, shut out of treatment by the US$10 000 per year price tag for a single person. MSF teams were determined to overcome this injustice and resorted to all means possible to get the medicines to people.

Today, almost 25 million people with HIV are alive and well on treatment, now priced as low as $65 a year.  But children with HIV have been left behind.  There’s no commercial incentive for pharmaceutical corporations to specifically invest in paediatric treatments for HIV, because virtually the only kids with HIV live in developing countries that can’t pay high prices for medicines.  So children born with HIV in the communities where MSF works don’t have the treatments that meet their needs.

A child dies of pneumonia every 39 seconds. There is an effective vaccine to prevent children contracting this dangerous and deadly illness. It used to be too expensive for children in many developing countries.

Wish #5 Ebola meds and vaccines for people most in need

The Ebola virus has been claiming lives for forty years or more. Yet it was ignored by drug developers as not commercially attractive, and so nothing significant was done to develop any vaccines or treatments.

The outbreak in West Africa in 2014 changed all this, because what before had been seen by rich countries as a ‘problem’ for people in parts of Africa, now took on the dimension of a global threat. This immediately galvanised the international community in to action, and today there are medicines and vaccines either already available or on the way.

As we move in to 2020, we will work tirelessly ensure that the people in need in countries most at risk get timely access to the new medicines and vaccines at an affordable price.

These products were developed through a remarkable collaborative research and development effort by multiple contributors, through a development process funded almost entirely with public funding, not private investment.

A world  where medicines aren’t a luxury and where EVERYONE can access the treatments they need to stay alive and healthy.