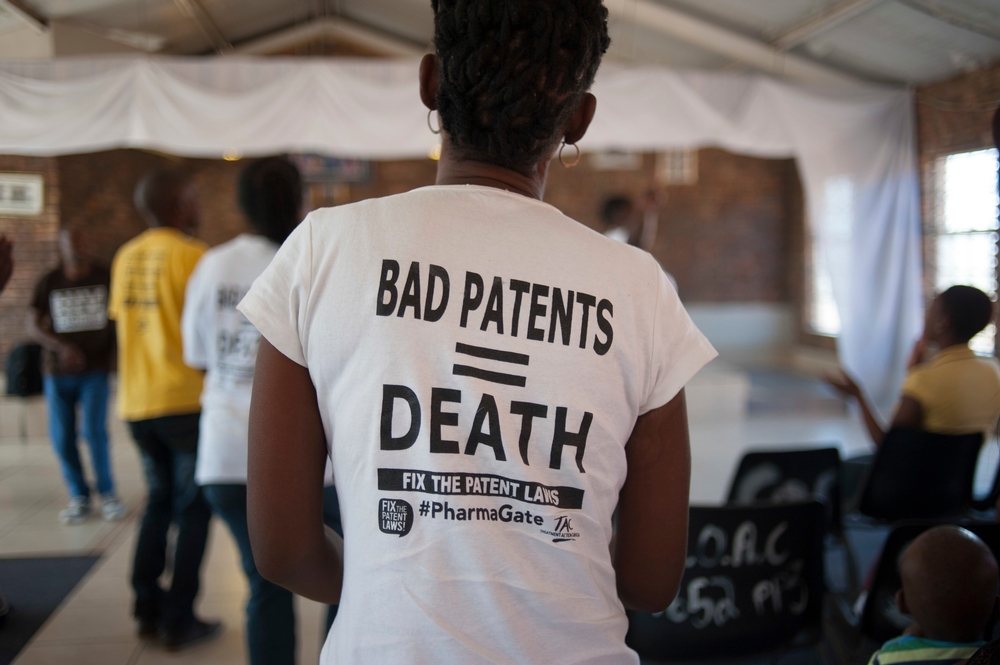 Johannesburg, 31 May 2018—Médecins Sans Frontières (MSF) applauds the landmark move by the South African government, after years of advocacy efforts by civil society through the Fix the Patent Laws (FTPL) Campaign, to release a new intellectual property (IP) policy that will stop the country’s process of blindly handing out patents, providing hope to people across South Africa who cannot afford the medicines they need to stay alive and healthy. The policy is a first big step to amend the country’s patent law in favour of public health.

South African patent law currently allows pharmaceutical corporations to easily obtain multiple, undeserved patents on a single drug and charge people exorbitant prices. For example, South Africa has one of the highest burdens of tuberculosis (TB) and drug-resistant tuberculosis (DR-TB) in the world, yet high prices have limited people’s access to several key TB drugs. People with DR-TB in South Africa could not access the drug linezolid while it was under extended patent monopoly and priced at over US$49 per tablet. At the same time, generic versions of this drug were available at as low as $8 in many countries, including India.

Two key newer drugs for treating DR-TB, bedaquiline and delamanid, have also faced the same fate, with both already patented multiple times in South Africa, extending their patent terms beyond 20 years. These drugs are exorbitantly priced at $900 and $1,700, respectively, for a six-month treatment course. Research has shown that realistic generic target prices for these drugs could range from $48-$102 for bedaquiline and from $30-$96 for delamanid. However, because the drugs are under extended patent monopolies, prices are not expected to fall to these levels any time soon.

“I was one of the lucky few who managed to access linezolid for my treatment when the drug was extremely expensive in South Africa,” said Phumeza Tisile of Khayelitsha, who survived extensively-drug-resistant (XDR) TB. “I hope new patent reforms will halt the granting of multiple patents on the same medicine and increase access to affordable generic versions of lifesaving medicines that people in South Africa are desperately waiting for.”

South Africa has for decades failed to take advantage of the flexibilities allowed under World Trade Organization rules, leaving the country vulnerable to abusive patenting practices by pharmaceutical companies, and inflated medicine prices as a result. The IP policy finally released this week is in line with the international agreement on Trade Related Aspects of Intellectual Property Rights (TRIPS) that allows countries to amend their patent laws to incorporate public health safeguards, as specified by the Doha Declaration on TRIPS and Public Health.

For the last nine years, the patent reform process has faced many delays, largely due to immense pressure from multinational pharmaceutical corporations. The new IP policy would not have been possible without the collective efforts of FTPL Campaign, who advocated for patent law reform and engaged with the government in many different ways, including taking to the street in protest when needed, to ensure a pro-public health approach was taken.

“It has been a long journey for the FTPL Campaign, which has consistently put pressure on the South African government to move toward patent law reforms that are in the public interest and seek to increase access to affordable medicines through generic competition,” said Salome Meyer of the Cancer Alliance, one of the members of the FTPL Campaign. “Now our focus will be to ensure that the policy is quickly turned into law and implemented properly. We must to put a stop now to people’s struggles to afford the medicines that they need.”

Until now, South Africa had a patent registration system that allowed patents to be granted without substantive review. The new policy includes explicit action points to introduce substantive search and examination, as well as procedures to allow any interested party to challenge patent decisions. It also includes recommendations that can help ensure a public-health-based approach for issuing compulsory licences to override unmerited patents.

“South Africa’s intellectual property policy will pave the way for a new, progressive intellectual property law in the country by prioritising people’s needs over corporations’ profits,” said Claire Waterhouse of MSF’s Access Campaign. “Countries such as Argentina and India have struck a balance between promoting public health and access to medicines, reserving patents only for truly new medicinal compounds. Following their example, we really believe that if South Africa legislates and implements this policy swiftly, it will not only ensure that people have the medicines they need but will also set a positive example for other countries and civil society groups in Africa involved in patent law reform processes.”

The Fix the Patent Laws (FTPL) Campaign is a local coalition of South African civil society organisations that have been advocating for patent law reform and engaging with the South African government since 2011. The group, which started as just three organisations – MSF, Treatment Action Campaign (TAC) and SECTION27 – is now made up of 40 patient and advocacy organisations working on a wide range of concerns, including HIV, TB, cancer and mental illness. Learn more at: http://www.fixthepatentlaws.org