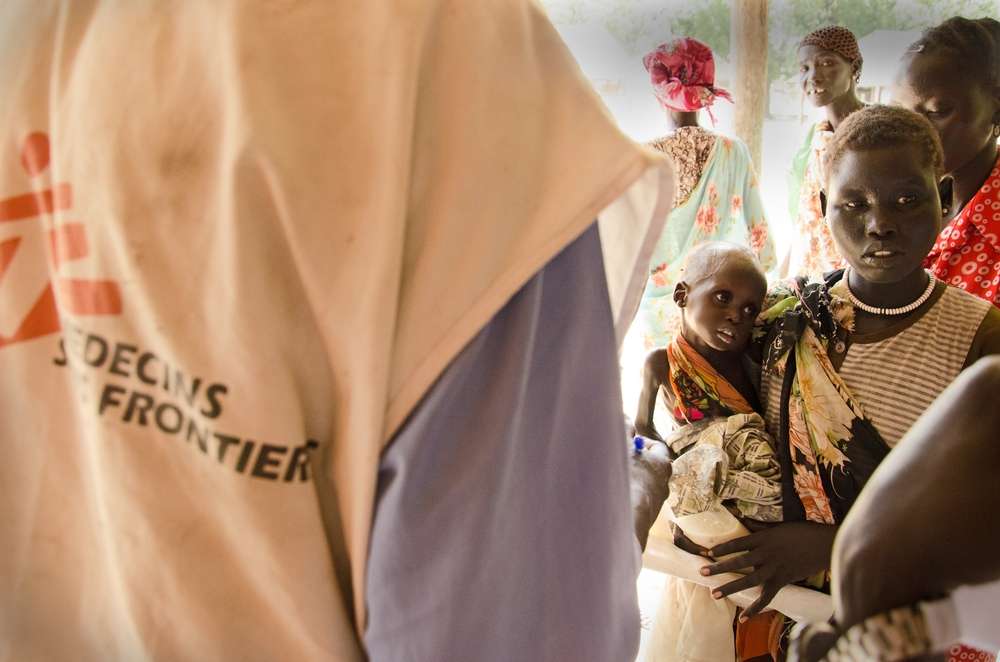 PRESS RELEASE: Children in parts of South Sudan are suffering from shocking rates of malnutrition.

More than 13,270 children, most under the age of five, have been admitted to MSF feeding programmes in South Sudan so far this year, amounting to 73 percent of the 18,125 admissions during the whole of 2013.

Violence, displacement, and food shortages are the leading causes of the spike in malnutrition rates and the increasing numbers of children requiring urgent medical care in some locations where MSF is working.

“We are now witnessing the shocking, cumulative consequences of one million people being displaced from their homes,” said Raphael Gorgeu, MSF head of mission in South Sudan.

“This is a man-made disaster. Some people have been living in the bush for six months, drinking dirty swamp water and eating roots to survive.”

Rates of malnutrition have skyrocketed in parts of Upper Nile, Unity and Jonglei States since conflict erupted in South Sudan in December. In the town of Leer in Unity State, MSF teams were treating 40 malnutrition cases each month before the outbreak of hostilities.  More than 1,000 new cases per month are now being treated.

In Unity state, the scale of the malnutrition became clear when people who had been displaced by fighting returned to the town of Leer in May, following months living in the bush.

“They began streaming into the hospital,” said Sarah Maynard, MSF project coordinator in Leer. “It was overwhelming. The levels of malnutrition were startling.”

In Bentiu, a specialised MSF facility set up in May 2014 to treat severely malnourished people suffering from medical complications, including diarrhoea, chest infections and dehydration, has already admitted 239 children, of whom 42 have died.

In Jonglei state, MSF facilities in Lankien and Yuai have seen a 60 percent increase in admissions in the first six months of the year compared to the same period last year, from an average of 175 per month in 2013 to 290 admissions per month in 2014 so far.

The conflict which erupted in December 2013 in South Sudan has had disastrous consequences, including the current rates of malnutrition.

In Nasir, fighting in May forced MSF teams to evacuate its projects there and many people fled the town, crossing into neighbouring Ethiopia. MSF teams providing primary healthcare to hundreds of refugees crossing the border every day into the Gambella region report newly arriving malnourished refugees and high malnutrition rates overall: 20 percent for global acute malnutrition and six percent for severe acute malnutrition, well above emergency threshold levels.

Testimonies from refugees describe food and safe shelter as important motivators for coming to Gambella.

"In May, South Sudanese fled because of the fighting,” said Dr. Natalie Roberts, MSF medical coordinator in Gambella. “Now they say they have left their country because of food deprivation."

The vast numbers of displaced people in the bush have lost their cattle, crops, seeds and farming implements. They are trying to survive on a diet of roots and leaves, while living amidst muddy swamp water.

The violence has interrupted planting and has prevented crop harvesting.  Existing food stocks have been destroyed or looted. Markets have been disrupted and roads are impassable due to the conflict. The ongoing rainy season and annual “lean season” (usually from June to August, when food is scarce) are exacerbating the food crisis.

Humanitarian actors on the ground must scale up assistance, preposition adequate supplies regionally to ensure food distributions, and meet funding goals to ensure people receive the assistance they deserve.

Parties to the conflict must ensure that everything is done to facilitate humanitarian assistance to populations in need. This includes securing safe access by road and river within South Sudan as well as cross-border corridors for the delivery of humanitarian aid.