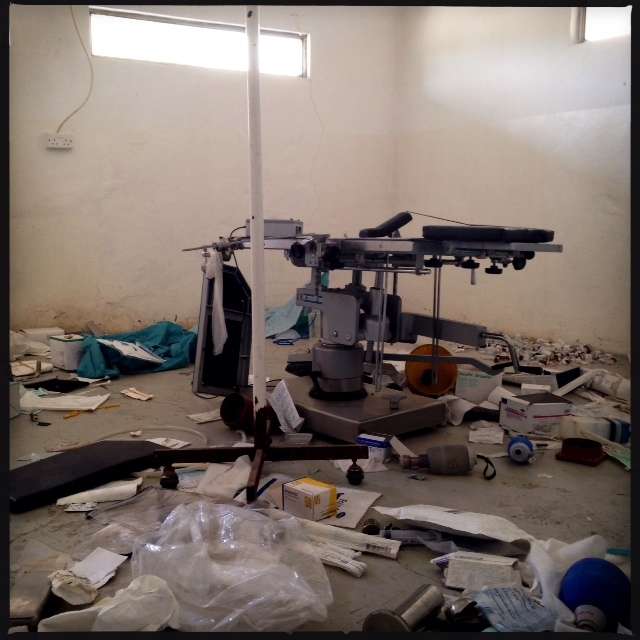 PRESS RELEASE: As entire towns in South Sudan suffer devastating attacks, medical care has also come under fire with patients shot in their beds, wards burned to the ground, medical equipment looted and, in one case, an entire hospital destroyed.

As entire towns in South Sudan suffer devastating attacks, medical care has also come under fire with patients shot in their beds, wards burned to the ground, medical equipment looted and, in one case, an entire hospital destroyed, the international medical humanitarian organisation Médecins Sans Frontières/Doctors Without Borders (MSF) announced today. Hundreds of thousands of people have been effectively denied lifesaving assistance.

In another disturbing violation of medical structures since conflict erupted in mid-December 2013, an MSF team returned to Leer, in Unity State, and discovered the hospital thoroughly looted, burned and vandalised. Vast parts of the town appear to have been razed to the ground.

“Assaults on medical facilities and patients are part of a broader backdrop of brutal attacks on towns, markets and public facilities,” said Raphael Gorgeu, MSF head of mission.

“These attacks show a complete lack of respect for medical care and deprive the most vulnerable of life-saving assistance just when they need it most.”

Scenes of horror in Malakal

On 22nd February, MSF teams discovered at least 14 dead bodies throughout the Malakal Teaching Hospital compound, scattered among 50 to 75 patients who remained in the facility, too weak or elderly to flee for safety. Several patients showed signs they had been shot dead while lying in their beds.

Many of the hospital wards, including the therapeutic feeding center for malnourished children, had been burned, and general looting had clearly taken place throughout the hospital.

MSF has evacuated several of the most severely ill patients to the United Nations Mission in South Sudan (UNMISS) base in Malakal for treatment, 13 of whom were gunshot victims.

“Malakal is deserted, with houses burned throughout and countless dead bodies strewn in the streets,” said Carlos Francisco, MSF’s emergency coordinator in Malakal.

“I can find no words to describe the brutality in Malakal, which has left in its wake a ransacked city and a thoroughly traumatized people.”

Some of the patients MSF evacuated to the UNMISS base recounted that armed groups entered the hospital on 19th February and shot dead people who had no money or mobile phones to hand over.

Later that afternoon, armed men returned and killed patients in their beds and others who had fled to the operating theatre for safety, according to survivor testimonies. They also reportedly raped women and young girls.

Hundreds of thousands deprived of care in Leer

Hundreds of thousands of people have been cut off from critical, lifesaving medical care after Leer Hospital was ransacked and destroyed between the final days of January and early February.

When MSF staff were able to assess Leer Hospital following weeks of insecurity in the area, they discovered a horrific scene of equipment and buildings reduced to ash, drug vials smashed and strewn throughout the grounds, and sterilised surgical equipment broken and discarded everywhere.

Drugs, patient beds, and other supplies were thoroughly looted. Not a single hospital bed remains in the facility compound (click here for a PDF guide displaying the destruction).

“The people of Leer and throughout southern Unity State knew they could count upon MSF for critical medical care, and now that assurance is simply gone,” said Gorgeu.

“The trust that is essential for us to carry out our work has been shattered, and the ultimate victims are the countless people who will suffer—and likely die—for want of medical care.”

The hospital in Leer, opened 25 years ago, was the only secondary healthcare facility in the region, constituting a critical lifeline for nearly 300,000 people in the surrounding area. In 2013 alone, more than 68,000 medical consultations were carried out, nearly 400 people underwent surgical care and 2,100 children were treated for malnutrition.

Since 15th December, when fighting erupted in South Sudan, and up to 15th January 2014, more than 4,000 consultations were carried out and nearly 170 surgeries were performed until the forced closure in late January.

“Leer is now empty of civilians who have fled continued insecurity and are living in terrible conditions in the bush, too terrified to return home,” said Sarah Maynard, MSF project coordinator for Leer.

“But even if they were to come back tomorrow, or a month from now, they would return to ruins of their former home and no healthcare. This is catastrophic for the population.”

MSF’s 240 locally-hired staff remain hidden in the bush, struggling to treat patients with rapidly dwindling supplies. The staff report they are reusing wound dressings and trying desperately to assist the displaced who have grown more ill from drinking dirty river water and from eating water lilies for lack of food.

MSF is exploring every avenue to provide healthcare to the displaced and resupply its staff.

“We must seriously consider if we can return to work in Leer Hospital,” said Gorgeu. “That will not only require significant investment of resources, but it will depend upon on unconditional respect from all parties for our medical facilities, staff, and patients, not only in southern Unity State but everywhere in the country.”

Disturbing pattern of medical care under fire in South Sudan

The atrocities in the hospital in Malakal and the destruction of Leer Hospital take place amidst a disturbing pattern of incidents affecting medical staff, patients, and MSF-supported facilities in South Sudan:

“Medical care has come under fire in South Sudan,” said Gorgeu. “Rather than safe havens for treatment, hospitals are now targets of attack and brutality. They are places to fear rather than trust, a complete inversion of their purpose and role.

“Hundreds of thousands of people are in desperate need of shelter, food, water, and healthcare in South Sudan. The question is, how can effective, neutral aid be provided in a climate of utter disrespect and fear?”

MSF has been working in the region that today constitutes the Republic of South Sudan since 1983, and currently runs 17 projects in nine of the country’s ten states, with regular projects in Agok, Aweil, Bentiu, Gogrial, Maban, Malakal, Nasir, Yambio, Lankien, Yuai, Pamat, and Yida and four additional emergency operations in Juba, Awerial, Malakal, Melut, and Nimule.

MSF responds to emergencies, including large-scale displacement, refugee influxes, alarming nutrition situations and peaks of disease such as measles, malaria, acute watery diarrhea and kala azar, in addition to providing basic and specialist healthcare services. MSF is also providing medical and humanitarian to refugees from South Sudan in Kenya, Uganda and Ethiopia.

In the first ten weeks of the current crisis, MSF carried out 103,614 consultations (including 40,925 of children under five), 3,767 hospitalizations (including 2,282 of children under five), treated 1,393 war wounded, performed 755 major surgeries, and 2,157 deliveries. MSF currently has 333 international staff working in its projects alongside 3,330 South Sudanese staff.