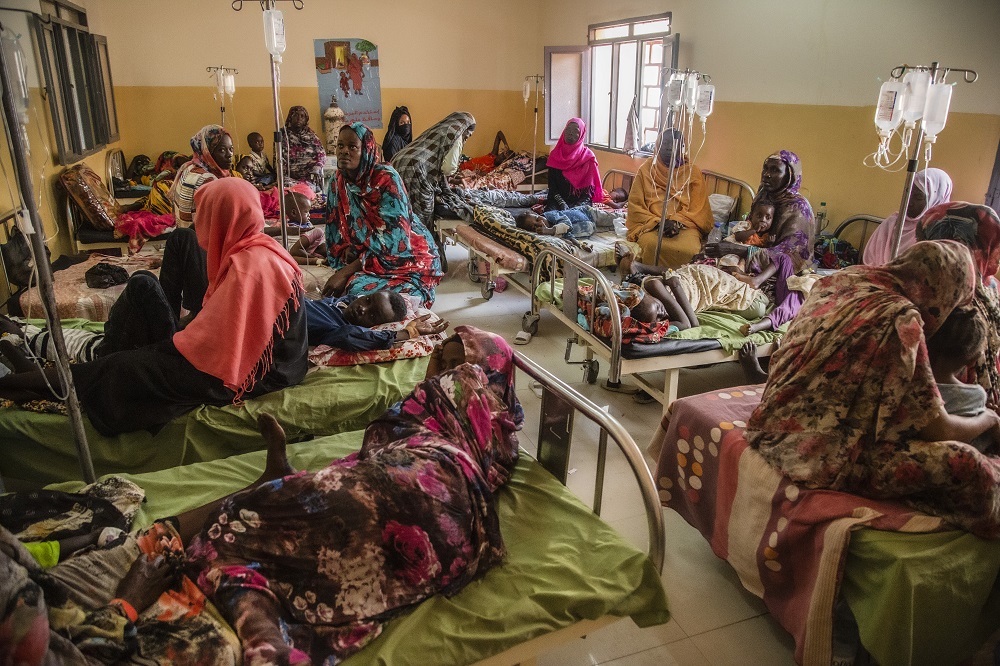 Sudan: Many families in my village are affected by malaria

Maha Mohamed, 22, sits with her daughter Salma, 7. They come from a farming village on the outskirts of El Fasher.

We came to the hospital yesterday at 8am as there is no clinic in our village. My daughter had fever, a headache and felt sick. She tested positive for malaria. The support received has been good and, after one day, my daughter has begun to recover.

Many families in my village are affected by malaria. Nine out of 10 members of my family have already had it. I had malaria one month ago and I have gone through this disease four times in my life. This year I suffered more.

We were given a mosquito net last year, but this year nobody brought one. We have four nets for ten people at home. We feel the mosquito population is large. The weather is changing and the rainy season is lasting longer. Next to our house, there are pools full of water. Draining the water would help, but we would also like to get preventive medication to protect us from the mosquitoes.

The continuous rains are also ruining some of our crops, so the harvest will be smaller.

Ibrahim Ahmad, 49, looks after his nine-year-old son Mutawaquil, one of his ten children. They are from East Darfur, but have been displaced in El Fasher for nearly a decade. They live in a camp for internally displaced people five kilometres away.

My son was walking and, suddenly, he fell down. We were very worried as he didn’t speak for two days. His mother was losing patience. He was admitted to hospital five days ago. A doctor comes every half an hour to check his condition.

Alhamdolillah (God willing), he is improving and has started to talk again. I am very thankful to the medical team for treating my child and for providing free medications. If it wasn’t for MSF, I couldn’t afford to pay for the treatment as some drugs are very expensive.

Before the rainy season, I was given four mosquito nets for my whole family by an NGO, but the children got out of theirs during the night.

It has been raining too much this year and there are pools of water everywhere. Malaria is very dangerous and affects people very quickly.  My child was about to die. Luckily, he is the only one in my family who got sick this time.

“I haven’t seen malaria like this in the past”

Husna Usman, 25, holds her nearly two-year-old child, Mohamad Sami. She has lived in El Fasher since her childhood. Her family cultivates ground nuts and millet.

My child had a high fever and was having convulsions. I was worried about him and we came right away to the hospital – we didn’t waste any time. Today is our third day here and Mohamed is already improving. After testing positive for malaria, he was put on fluids and the treatment started.

This year, malaria is affecting many more people. I haven´t seen malaria like this in the past in El Fasher. I’ve had malaria twice, including this year. We have mosquito nets but not enough for everyone and two to three people sleep under each net.

The most important thing is to make preventive measures available and get free medication. My husband is a daily worker and sometimes works but other times he doesn’t. Medicines are very expensive compared with what we can earn.