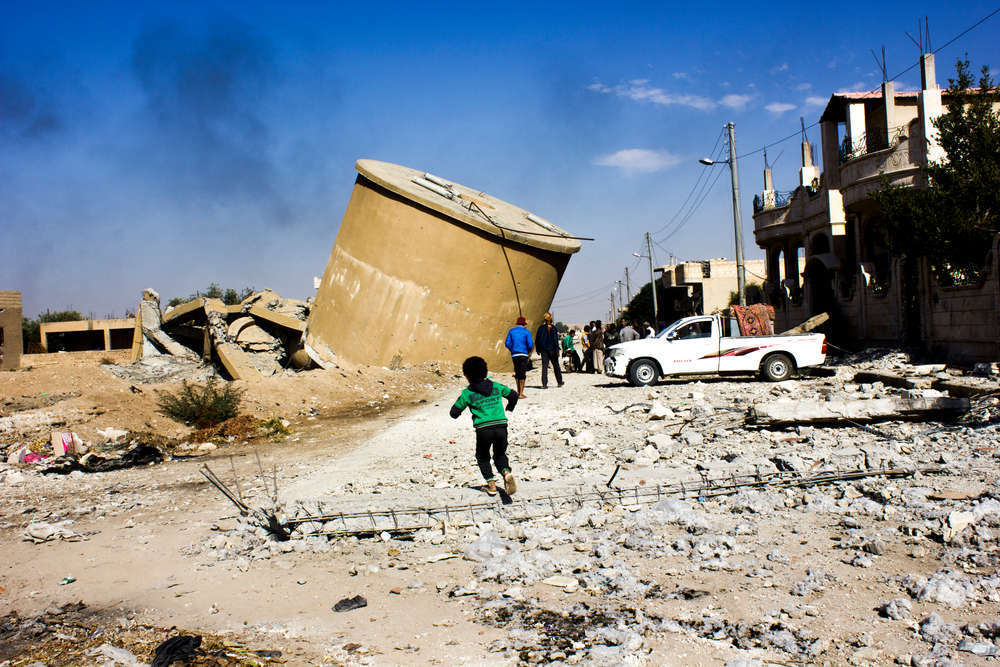 Six weeks after fighting subsided in Raqqa city and surrounding villages, former residents are returning home to find their houses in ruins and their streets and fields littered with unexploded remnants of war including booby-traps, landmines, ammunition and rockets.

“The fighting may have stopped, but people are still getting wounded”
Craig Kenzie, MSF

Amsterdam/Syria, 29 November 2017 – Six weeks after fighting subsided in Raqqa city and surrounding villages, former residents are returning home to find their houses in ruins and their streets and fields littered with unexploded remnants of war including booby-traps, landmines, ammunition and rockets.

In just 10 days from 19 to 28 November, 49 patients with blast injuries arrived at the clinic run by international medical organisation Médecins Sans Frontières/Doctors Without Borders (MSF) in Al  Meshlab, a neighbourhood in the east of Raqqa city.

“When we first visited Al Meshlab, it was pretty much deserted, but on our latest visit, people were returning slowly to check on their houses,” says Craig Kenzie, leader of MSF’s Raqqa emergency response team. “Some have found their homes in ruins; others have found dead bodies and explosives in their houses, gardens and streets. Everyone fears setting off booby traps when entering buildings or stepping on something that may explode.”

People with critical injuries face immense difficulties reaching adequate stabilisation and trauma care. With many roads damaged or blocked, it can take one to two hours by ambulance to reach the nearest functioning hospital with surgical capacity. As a result, people with significant injuries are at risk of dying before or during the journey.

Since fighting subsided in Raqqa in mid-October, MSF teams in Tal Abyad hospital – the nearest hospital with surgical capacity to Raqqa city – have treated more than 85 patients with blast injuries. In that same period, MSF teams in nearby Kobane hospital treated 23 patients wounded by blasts.

“People we met in Al Meshlab told us that they had fled the neighbourhood months ago, as airstrikes increased and the fighting intensified,” says Kenzie. “Some were forced out when their houses were used as fighting positions.”

“I came back two days ago to find my house had been badly damaged,” said a 45-year-old woman. “I tried to at least get rid of the rubble before bringing the rest of the family back. We still need to rebuild our house, but living in your own damaged house is better than living in a tent even when the temperature drops below zero and there’s no roof over your head.”

“Two airstrikes hit our house,” said a 28-year-old man. “It’s going to take us months to rebuild it. We have babies in the family and we can’t make them live in these conditions.”

“I heard that my house had been hit, but I didn’t know it was destroyed,” said a 33-year-old man. “I came back yesterday to find that all that’s left is rubble. I can’t afford to rebuild it, so I’ll carry on living in a tent until I can find a way to build my house again.”

“Many of the houses that still stand in Al Meshlab bear the scars of war,”

“They have bullet marks, shattered windows and holes from explosions. The streets are full of rubbish and personal belongings. Many buildings have been ransacked and there are numerous roads blocked with burnt out cars.”

“From what we see, the fighting that took place here was extremely intense. There are all kinds of explosive devices amongst the rubble. The fighting may have stopped, but people are still getting wounded. It’s devastating to see people who have experienced fighting, insecurity and displacement, who have already lost so much, still at risk of injury and death. Our medical teams are ready to respond to the surgical needs of people with catastrophic and life-threatening injuries.”

“It’s natural that people forced from their homes by fighting will want to return and find a way to get on with their lives. They face an almost impossible choice: either stay on uncertainly in temporary shelters, often shared with many other families, or return to their own houses in Raqqa. Those who return have to accept the risks and challenges of living in a recent battleground, surrounded by explosives. Educating people about mines can increase their awareness of the dangers and help them weigh up this difficult choice.”

“Despite the devastation, returning residents are doing their best to make Al Meshlab habitable again,”

“We see people and families returning every day here, starting the enormous job of cleaning up, helping each other to remove the rubble and the barricades of piled-up earth from in front of their doors left over from the street fighting.”

Al Meshlab is just one of many neighbourhoods across Raqqa governorate that need to be made safe and rebuilt so that people can return home without risking their lives. The active fighting in this part of Syria may be over, but the health and humanitarian consequences are likely to be felt for years to come.