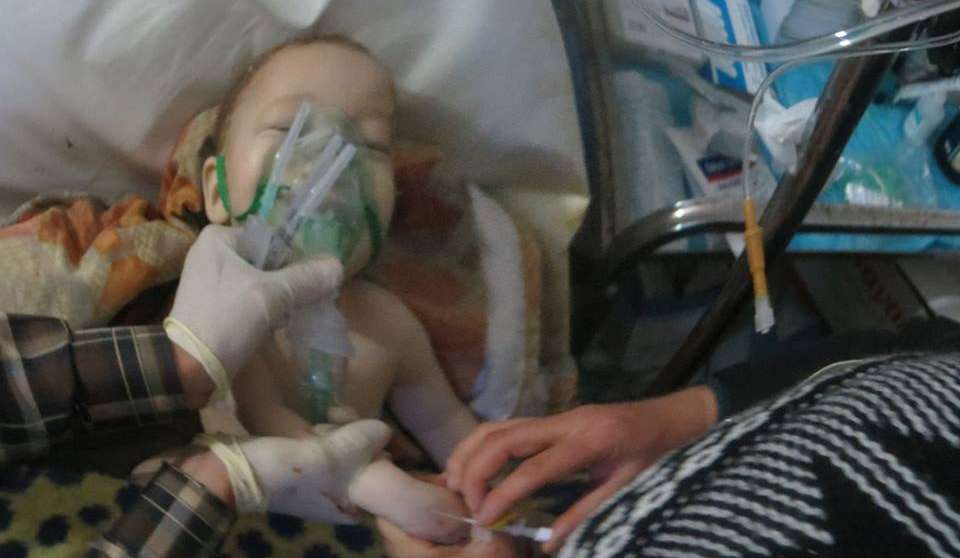 PRESS RELEASE: A chlorine attack in the north west of Syria 16th March has killed six people and poisoned a further 70 civilians, according to reports by Syrian doctors working in the region who were contacted by MSF.

A chlorine attack in the north west of Syria on 16th March has killed six people and poisoned a further 70 people, according to reports by Syrian doctors working in the region who were contacted by Médecins Sans Frontières/Doctors Without Borders (MSF).

Helicopters were seen dropping barrels, which released a suffocating gas on impact with the ground. The attacks happened around the rebel-controlled town of Sarmin, in Idlib region.

MSF is supporting the Sarmin hospital where the wounded were treated and received reports of the dead and wounded. “Attacking a village and its civilian population with chlorine shows once again that the Syrian conflict knows no limits”, said Dr Mego Terzian, MSF President.

“We saw people arriving at the hospital from a neighbouring village”, said Dr T, the director of Sarmin hospital. “Amongst them, there was a family, three young children with their parents. They were in a very serious condition, dying.

“Their parents were able to speak but they were having a lot of difficulty breathing.”

The entire family died in the hospital, whilst the grandmother of the children had died of asphyxiation before reaching medical assistance.

The events and symptoms described by the medical staff of the hospital leave no doubt as to the presence of chlorine poisoning. There were no symptoms consistent with any other toxic products.

“It was dark so we couldn’t see any particular colour in the sky”, stated the hospital director. “But the air smelt of cleaning products and their clothes had the distinctive smell of chlorine.”

Photo taken by the medical teams in the MSF-supported makeshift facility.

The victims of the attack there suffered to varying degrees of severity and a number of people were acutely asphyxiated.

“There were 20 patients in serious condition, agitated, foaming blood at the mouth and showing skin rashes,” said another hospital doctor.

The hospital team treated 70 victims: the inhabitants of a neighbouring village which had come under attack by the first barrel bombs, the inhabitants of Sarmin town which was attacked later during the night, and voluntary first aid workers of the Syrian Civil Defence affected when they arrived to give assistance.

The victims were given oxygen as well as treatments to dilate the bronchia of the lungs and treat inflammation due to the burns suffered. The doctor stated that the aerosol masks were their most  effective tool.

The hospital in Sarmin is one of a number of medical structures in the inaccessible conflict-affected areas of Syria supported by MSF. The organisation provides donations of drugs and medical supplies to functioning health structures.

MSF operates six medical facilities inside Syria and support directly more than 100 clinics, health posts and field hospitals. MSF is also working with patients from Syria who have fled to Jordan, Lebanon and Iraq.

Find out more about MSF’s work in and around Syria