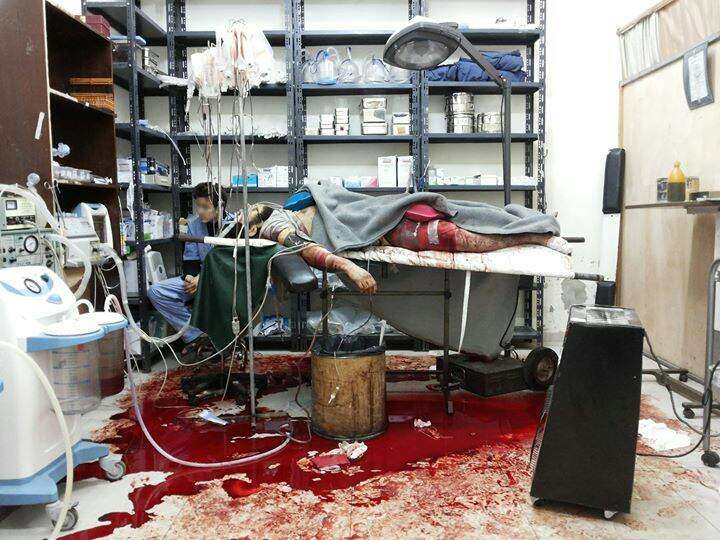 Syria: Intense bombing in Damascus results in one of the bloodiest months since conflict began

Press release: A series of extreme mass-casualty influxes, following 20 consecutive days of intense bombing attacks in Syria, have been reported by makeshift hospitals supported by MSF.

Twenty days of intense bombing of markets and civilian buildings in the besieged community of East Ghouta, near Damascus, have injured at least 3,000 people, according to international medical organisation Médecins Sans Frontières/Doctors Without Borders (MSF).

Makeshift hospitals supported by MSF report that at least 150 patients per day have been treated for war wounds during this period, described by MSF as one of the bloodiest months since the conflict began.

At the same time, new areas to the north of Damascus, home to at least 600,000 people, have come under siege.

Thirteen hospitals supported by MSF in East Ghouta report being almost permanently overwhelmed with violent trauma cases from 12 to 31 August.

MSF has precise data for six hospitals, which saw 377 deaths and 1,932 wounded. One in four victims were children under the age of 15, with 104 children killed and 546 wounded.

MSF does not yet have a full breakdown of figures from the remaining hospitals as the intensity of the bombing has temporarily cut some communication channels.

“One of the bloodiest months”

“This is one of the bloodiest months since the horrific chemical weapons attack in August 2013,” says Dr Bart Janssens, MSF director of operations. “At least 150 war-wounded patients were treated each day in East Ghouta during these 20 days of bombing.

"The hospitals we support are makeshift structures, where getting medicine is dangerous and challenging. With such constraints, it is unthinkable that they would have been able to cope with the intensity of emergency trauma response. The unwavering efforts of Syrian doctors to save lives in these circumstances is deeply inspiring, but the situation that has led to this is totally outrageous.”

At the same time, the sieges of areas around Damascus have both tightened and expanded. Three new areas to the north of Damascus – All Tall, Hameh and Qoudsaaya, where at least 600,000 people live – have been under siege since 22 July.

People entering the areas are stopped and searched, and no medical supplies, food, fuel or other basic essentials are allowed in. “The stranglehold of the siege means that these communities are being deprived of the basics that are essential to their survival,” says Dr Janssens.

This video shows a busy emergency room in a hospital in one of the besieged areas near Damascus. Video shot in February 2015.

400 amputations in one month

“We are aware of around 400 amputations conducted in East Ghouta in August,” says Dr Janssens.

"Many of these people’s limbs could have probably been saved if the medical care in besieged areas wase not so desperately constrained. We are still able to get medical supplies through the siege lines via the medical networks, but it is becoming increasingly difficult.”

MSF is urgently organising to send in supplies of essential medical items to replenish exhausted pharmacy stocks, including more than 5,000 IV fluid pouches and 1,500 pouches of blood.

Four million Syrians have fled Syria and millions are refugees in neighbouring countries, while thousands are risking death and detention on their way to Europe.

Some two million people are under siege in places like East Ghouta, where violence and severe shortages of basic essentials are a daily reality.“

August was the worst month we’ve seen medically,” says the director of an MSF-supported hospital in one of the besieged areas. “Anyone who isn’t injured or dead can count themselves lucky. Enough death and siege. Enough blood and misery. Enough.”

MSF operates six medical facilities in the north of Syria and directly supports more than 100 health posts and field hospitals throughout the country, with a particular focus on areas under siege.

These are mostly makeshift facilities with no MSF staff present, where MSF provides both material support and distance training support to help the Syrian medics cope with the extreme medical needs.

This support network has been built up over the past four years.