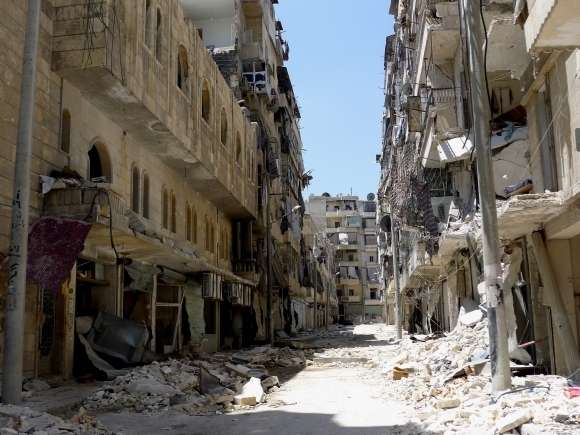 Syria: MSF calls for wounded to be evacuated from Aleppo

PRESS RELEASE: Following fierce clashes in Aleppo in recent days, the medical humanitarian organisation MSF urges all parties to the conflict to facilitate the evacuation of the wounded.

Following fierce clashes in Aleppo in recent days, the medical humanitarian organisation Médecins Sans Frontières/Doctors Without Borders (MSF) urges all parties to the conflict to facilitate the evacuation of the wounded.

People have been trapped by fighting and aerial bombardments in the northern Syrian city for months.

A new wave of displaced families is fleeing the city to the Turkish border, either staying with relatives or in camps for displaced people.

“We call on parties to the conflict to allow the population to seek refuge in safe areas and grant provision of humanitarian assistance,” says Raquel Ayora, MSF director of operations.

“This already grave humanitarian crisis will deteriorate further if medical teams have no access to the area and there is no way to get supplies in. We are talking about tens of thousands of people isolated from any kind of assistance.”

Following the fighting between government and opposition forces on 16th February, 21 wounded people were admitted to an MSF hospital located near the Turkish border.

Eleven more wounded people arrived at an MSF facility in the outskirts of Aleppo city.

Medical staff in this hospital were forced to evacuate due to growing insecurity in the area. Prior to the evacuation of the facility, seven patients were stabilised and transferred to other health centres.

“Our paramount concern is that the clashes block the only road open between Aleppo and the northern border with Turkey, making it almost impossible to run the ambulance services and provide medical and humanitarian assistance to the people trapped by war in eastern Aleppo,” adds Ayora.

After the evacuation, voluntary medical workers from the area staffed the hospital to provide emergency assistance to the wounded, a sign of the dedication shown by Syrian medical networks.

During the clashes, artillery was used and helicopters targeted both villages and the frontlines.

In Hayyan, located in rural Aleppo, there were also reports of at least one barrel bombing, a tactic frequently used by Syrian forces in the past year.

In 2014, the MSF teams running the evacuated hospital carried out around 16,000 consultations (among them, 6,000 in the emergency room), admitting 410 people.

MSF is also running a hospital near the Turkish border, where many displaced people stay in a camp hosting over 15,000 people.

The presence of international staff in MSF projects in Syria is extremely limited due to security constraints. All the staff evacuated from Aleppo are Syrian.

MSF continues to operate medical facilities inside Syria, as well as supporting directly more than 120 clinics, health posts and field hospitals. MSF is also working with patients from Syria who have fled to Jordan, Lebanon and Iraq.