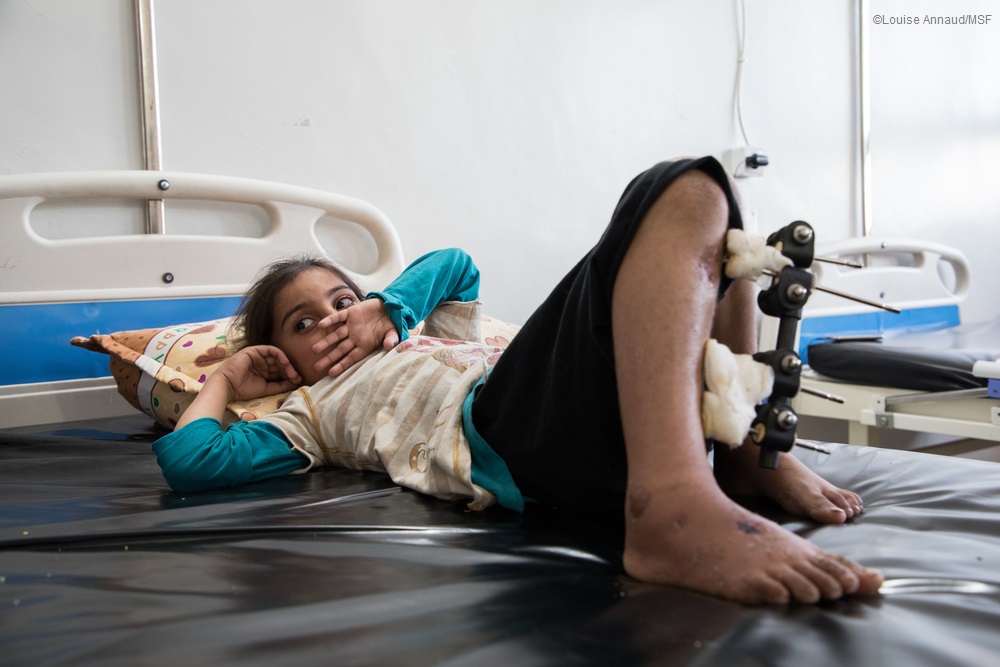 The number of patients injured by landmines, booby traps and explosives doubled between November 2017 and March 2018. Half of the victims were children, some as young as one.

This alarming trend comes as more people return home after fighting subsided in the governorates of Raqqa, Hassakeh and Deir ez-Zor.

MSF urgently calls on all organisations and entities involved, international and local, to expand and accelerate demining action and risk education activities, and to improve access to life-saving medical care for victims of explosive devices in Deir ez-Zor.

Satoru Ida, MSF Head of Mission in Syria said: “Patients tell us that landmines, booby traps and other improvised explosive devices are planted in fields, along roads, on the roofs of houses, and under staircases. Household items like teapots, pillows, cooking pots, toys, air-conditioning machines, and refrigerators are also reportedly rigged to explode as people return home for the first time after months or years in displacement.”

In north east Syria, MSF supports two hospitals: one in Tal Abyad that receives injuries mostly from Raqqa governorate, and another in Hassakeh. The latter is one of the few functioning free-of-charge, secondary healthcare facilities accessible to residents in Deir ez-Zor governorate. Nearly 75 per cent of patients arriving at the Hassakeh hospital are from Deir ez-Zor governorate, from locations as far as six hours away.

In 2017 alone, the violence in Deir ez-Zor caused at least 254,000 people to flee. Each of them was displaced an average of three times. This is the largest volume of population movements by governorate in Syria for that year.

While some people have returned home, the majority are still displaced and expected to travel back soon, sometimes unaware of the dangers awaiting them there. Demining experts fear that hundreds of thousands of devices still litter schools, medical facilities and agricultural fields in Deir ez-Zor. This is based on patterns observed in other governorates and information from recent incidents.

Ida added: “It is a race against time. People are returning to what is in effect a minefield. We will see an upshot in the number of blast victims without further action. Furthermore, with the health system in Deir ez-Zor paralyzed, the nearest health facility could be hours away for them. Every minute counts. If the person isn’t killed on the spot, the delay in receiving medical care is in most cases what determines the severity and recovery.”

Demining action is urgent, but risk education must also be expanded so that people looking to return home can make informed decisions, learn to identify and avoid explosive devices, learn what to do immediately after a device explodes, and perform first aid in case of an accident.

This must go hand in hand with improving access to emergency medical care – in many cases life-saving – for the victims of explosive devices in Deir ez-Zor and elsewhere in northeast Syria.

Ida underlined: “These explosive devices do not choose their targets. They do not respect peace treaties or ceasefires and can stay concealed for months or years after a conflict ends. If they don’t kill, they destroy the lives and livelihoods of their victims and their families, trapping them in poverty by disabling their hands or legs.”

The hospital supported by MSF in Hassakeh is the closest functioning free-of-charge secondary healthcare facility to Deir ez-Zor, which making it a credible source in analysing part of what is happening in the most mine-contaminated districts.

MSF has received 133 people wounded by landmines and booby-traps in 4.5 months – one per day on average. The number of patients affected by these injuries has sharply increased since the end of 2017, from 17 in November, to 39 in December, and 41 in January. From the beginning of February to 14 March, 36 victims were treated in the hospital.

More than 75% of patients admitted at the MSF hospital in Hassakeh with injuries related to landmines, booby-traps and similar hazards are from Deir ez-Zor, mainly from the area of Abu Hamam, but also Hajin, Dhiban, Garanish.

According to the UN’s tracking tool for internally displaced people, in 2017 Deir ez-Zor was the governorate with the highest number of population movements in Syria: more than 800,000 movements in total, accounting for 30% of the population movements in Syria. The UN also estimates that at least 255,000 people were on the move from the governorate of Deir ez-Zor. Which means that on average, each person was displaced three times in 2017.

In addition to providing direct support to the hospital in Hassakeh, MSF has just recently started assisting a public health facility in Deir ez-Zor, building the capacity of local staff and donating medication and other supplies. Our teams continue to explore ways to offer life-saving emergency treatment to victims in the Deir ez-Zor area, and more broadly in north east Syria.

Outside Raqqa city, MSF is running a primary health care clinic, and eight mobile vaccination teams to provide returnees in the city, but also across the governorate, with basic health care.

In November 2017, after the fighting subsided in the city, MSF began providing medical assistance to those returning to the city through a Primary Healthcare unit and stabilization point.

Elsewhere in Syria, MSF has partnerships with five facilities, and provides distance support to around 25 health facilities countrywide in areas where teams cannot be permanently present.

To ensure independence from political pressures, MSF receives no funding from any government for its work in Syria.