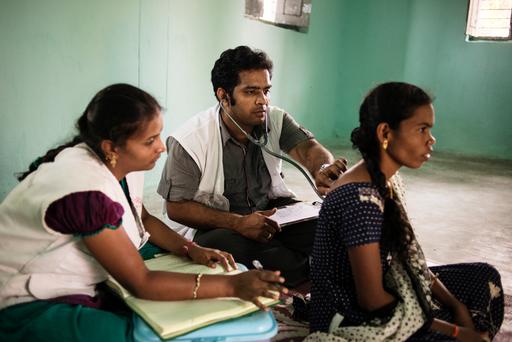 PRESS RELEASE: In our new report 'Out of Step' MSF has highlighted critical gaps in care for drug resistant tuberculosis (DR-TB) which is fuelling a worldwide public health crisis.

Outmoded policies and practices plus critical gaps in care for drug-resistant tuberculosis (DR-TB) are fuelling a worldwide public health crisis, said Médecins Sans Frontières/Doctors Without Borders (MSF) in a new report, Out of Step, released today at the 45th Union World Conference on Lung Health.

Based on a survey of eight high TB burden countries, MSF’s research reveals that efforts to control the epidemic are dangerously out of step with international recommendations and proven best practices, leaving drug resistant forms of TB to spread unabated.

MSF warns that governments, donors and industry must act now, using every means available, to step-up the response to the crisis, or face a further growth in resistance.

'DR-TB is a man-made disaster'

“This is no time for complacency: in some former Soviet Union states, MSF diagnoses multi-drug resistant TB (MDR-TB) in more than one in three people who have never been treated for TB before, indicating its spread from person to person," said Dr Petros Isaakidis, Medical Epidemiologist/Senior Operational Research Fellow, MSF India.

"In Mumbai, India, MSF sees that primary transmission of drug-resistant strains is likely driving the epidemic in hot spots like slums and within vulnerable groups such as people living with HIV,” he added.

“DR-TB is a manmade disaster, born out of years of neglect and driven by a slow and piecemeal response. Countries must increase their efforts to optimise DR-TB care in-line with international guidelines and seize the opportunity that new tools offer to strengthen and accelerate the fight against TB.”

The latest damning data from the World Health Organization shows that less than a third of the estimated MDR-TB patients worldwide are diagnosed, and only one in five receive proper treatment.

Gaps in care fuel the spread of DR-TB from person to person; in some countries, MDR-TB is diagnosed in up to 35 percent of new TB patients, a trend reflected in MSF clinics.

Gaps in response are costing lives

The Out of Step report reveals five deadly gaps in the TB response that are costing lives:

MSF’s research found that testing for drug resistance, crucial for preventing misdiagnosis and incorrect treatment, is grossly insufficient in most of the countries surveyed. In half of the countries, fewer than 75 percent of MDR-TB patients diagnosed are enrolled in treatment.

Further, some form of routine hospitalisation takes place in half of the countries, despite community-based care having proven more tolerable for patients and more cost effective while delivering similar medical outcomes.

Five out of eight National TB Programmes face critical funding gaps, with Kenya, Myanmar and Zimbabwe having less than 50 percent of the required funding available.

New and promising DR-TB drugs remain out of reach of most patients, more than a year after their introduction, with bedaquiline and delamanid unavailable for routine use in all countries surveyed.

In four of the countries surveyed, the new drugs are available to a limited few via compassionate use or equivalent programmes. None of the countries have all of the Group 5 repurposed medicines listed in their national guidelines – drugs that are critically important in salvage therapies.

Grania Brigden, MSF Access Campaign, TB Advisor said: “Patients are missing out on the potential of new and promising treatments because companies and countries are dragging their feet with registrations.

"Meanwhile, the lack of clinical trials incorporating new TB drugs into much-needed short, tolerable and effective regimens highlights the failings in the way medical innovation is conducted and incentivised. It’s time for TB research and development efforts to be prioritised and funded in a way that ensures lifesaving diagnostics and treatments rapidly reach the people who so desperately need them.”

Out of Step Report Background

MSF’s new report, Out of Step: Deadly implementation gaps in the TB response, is based on a critical review of key indicators for diagnosis, treatment and accessibility of key medicines, drug procurement and funding, and is complemented with MSF experience.

Médecins Sans Frontières/Doctors Without Borders (MSF) is an independent international medical humanitarian organisation that has been delivering medical care to people affected by armed conflicts, epidemics, natural disasters and exclusion from healthcare since 1971. Today, MSF has operations in nearly 70 countries.

In 1999, on the heels of MSF being awarded the Nobel Peace Prize – and largely in response to the inequalities surrounding access to HIV/AIDS treatment between rich and poor countries – MSF launched the Access Campaign.

Its sole purpose has been to push for access to, and the development of, life-saving and life-prolonging medicines, diagnostics and vaccines for patients in MSF programmes and beyond.

Current modes of research and development have failed to deliver new and better TB regimens to patients; as such, MSF and others are proposing a new way to conduct TB regimen research, in the form of the 3P project.

For more information on innovation in access to TB medicine