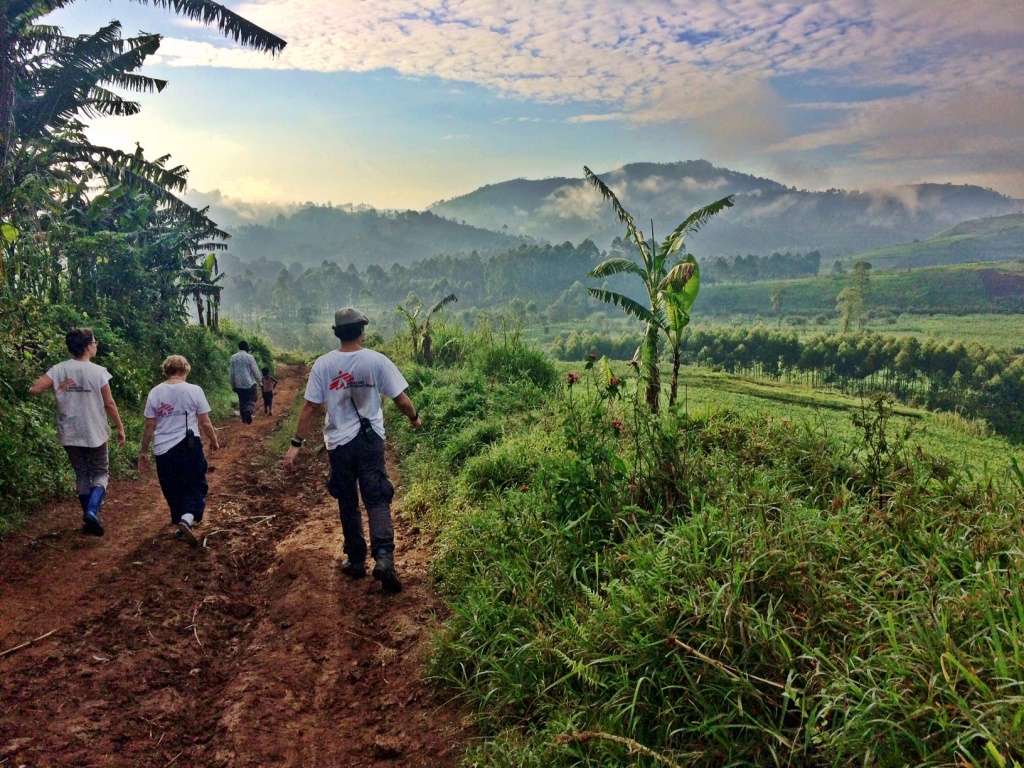 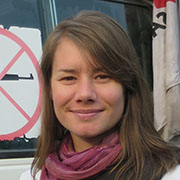 A weekend with our team in Congo

Project coordinator Emily Gilbert blogs about board games, coffee strategy, and the privilege of getting a day off in a conflict zone

In most MSF assignments, international staff work five-and-a-half to six days a week, which means Saturday becomes more like a Friday.

Saturday morning is spent working in the office and catching up on emails (with fewer interruptions as the full team aren't around), followed by a marathon of meetings that no one has time to do when they are occupied in the hospital and peripheral health posts all week.

After that, Saturday afternoon is usually spent hanging out together in the paillotte (traditional Congolese hut), chatting and playing card games, or taking some time out in our own bedrooms.

To be honest, by the time the working day has finished at 1.30 pm, the afternoon goes so fast that it's barely worth writing about.

As for my Sunday, here's what an average one looks like:

Woken up by church bells ringing across the road - something I actually enjoy.

It's not just because their gentle chiming is a rather pleasant first sound to hear in the morning, but also because of a feeling we all know: realising that instead of having to get up, I can merely roll over and go back to sleep.

I usually listen to a podcast to help me do this. The familiarity of a British or American radio host's voice helps keep my cycle of thoughts and recurring mental task management at bay, serenading me into a deep slumber.

Drag myself out of bed. The standard Sunday move of most British people, no matter where in the world they might be.

Go and greet the guards. They are the only team members working on the base on a Sunday, so I like to wish them a "bon dimanche" as I go to the cauldron of heated water to pour into my empty bucket for a shower.

Coffee. Sounds simple. Well, it should be, but with anything from 11-19 international staff members sharing the base, finding the one multiple-cup cafetière that isn't missing the rubber seal to keep it from leaking all over the stove is a morning challenge very few are up for.

You can guarantee there will always be at least two other people that want to get in on a fresh brew, no matter what time of day it is.

Then there are the matches. No matter how many matches are supplied to our project, they seem to be professional in their recurring disappearing act.

"Actually finding a cup is less easy than you think, with an expanding international team correlating with an ever-reducing cup quantity."

Then there's the gas. No electric hobs here. Our supply team here is so good that I have never experienced in Congo what I did in my last project where there was a gas rupture for so long that we were forced to fetch wood and make a fire every time we wanted a cuppa.

It sounds like a chore but it's something that people living here have to do on a daily basis. We are spoilt to have gas provided to cook with.

Anyway, taking all the above into account, and to avoid said dilemmas, I usually time my get-up perfectly. This is to coincide with another person having already reached the brewed-coffee stage, so my only task is to find a clean cup from the shelf, and hold it in front of the person with the ready-to-pour cafetière.

Actually finding a cup is less easy than you think, with an expanding international team correlating with an ever-reducing cup quantity.

The cups are usually broken from being knocked onto the floor by cats / so old that they have no handles left / desecrated by a previous night of sampling the goodies brought by a newly arrived staff member.

Join the other international staff in the paillotte for a natter.

It's nice having lazy Sunday mornings with a coffee, discussing the latest world goings-on, future plans, and exchanging ideas about life in our home countries.

This for me is like a Sunday morning in the UK, and makes me feel just that little bit closer to home.

The intention is usually there but in reality it doesn't always happen.

We have a really nice part of the base that we call "the garden". An area where there is grass and some flowers growing, with a little path that takes you to another small paillotte.

It's my favourite place to do yoga when I actually do it - it's calm, surrounded by trees, and if I turn my yoga mat away from the barbed-wire fencing, it's easy to forget that we are in fact in the middle of a conflict zone, with armed groups patrolling and violence occurring on a daily basis.

However - who am I kidding? Half the time I'm too hyped up on caffeine to be able to slow down my breathing and heart rate enough for it to coincide with a downward facing dog.

The other half of the time it's raining. The Great British excuse.

Whether or not I'm all zenned out from yoga, there is usually a small group of us who play board games in the late morning (with more coffee, of course).

Settlers of Catan is the current favourite: trading sheep for wood and brick for stone, building up settlements and cities. It's like a cross between Monopoly and Game of Thrones.

During this time, there is often an international staffer who goes for a walk into town to get some fresh vegetables from the market - and then comes back to make a feast.

We have some talented cooks in this project. The last few weeks' artisan surprises have included: dumplings; curry and dahl; ravioli; and vegetable tempura with cucumber yogurt - it's amazing how creative people can get with few resources, stuck on a base with a six pm curfew.

After lunch I usually spend time in my room watching The Office, or catching up on Skype with friends and family.

We are really lucky to have wifi here to be able to do that. When I first started this work nearly a decade ago, there was only internet on one computer in the whole office that was shared by the entire team.

Family catch-ups had to be coordinated not only with my boss, but also with the tens of other people fighting for their slot on the World Wide Web.

Here we have the luxury of doing it as and when we choose - the only rule is no streaming, downloading or video-chat, as this takes all the bandwidth available and cuts it off for everyone else.

Saturdays and Sundays are both days off for our base national staff (except guards), so there are often team members who pop over to greet us before using the internet in the office to catch up with the latest Facebook gossip or family emails (our house and office are next to each other in the same base).

The afternoon and evening vary.

As with the morning yoga, I flit between runs of a few days - sometimes even weeks - where I am disciplined and focus enough to spend every other week night and weekend doing a workout.

There are then long expanses when I can't even concentrate on anything longer than a 20 minute sitcom, let alone do anything remotely productive or energetic.

I used to feel bad and push myself when I went through the lazy, willpower-lacking phases. But now I just go with them, realising that my ability to do anything more than lay in a bed listening to the rain is closely linked to the amount of stress, bombardment of issues and multi-tasking I have to deal with at work.

But sometimes, there are a bunch of us who go for a "walk". This is probably the closest thing to normal life that we can do here.

Just opposite our compound is a hill which, according to the Admin's step counter, is a whole two km when done in full.

It's beautiful - and when we're up there it's easy to forget where we are.

The thing about being on an MSF assignment is there isn't really any proper down-time.

As the Project Coordinator, responsible for the security of the project including all international and national staff, I am never really off-duty.

There's not often a Sunday that goes by when I am not abruptly removed from my "day-off" mentality by the sudden sweet melody of the Nokia ring tone - usually to update me about an armed robbery on one of the surrounding roads, a gun-shot wound that has been received in the hospital, or the current state of clashes where of one of our supported health posts is, which we are due to visit in the coming days.

In fact I don't think I can say I have ever been truly relaxed on any day of the week in an MSF project, including Sundays. This is one of the reasons why MSF assignments are, on average, six to twelve months maximum.

Any more and your brain and body start yelling out for a break, and you start noticing yourself becoming more tired, more irritable and less effective at your job. As I'm coming towards the end of my assignment, these sensations are even more apparent.

I find myself avoiding tasks I don't want to do unless I have to, my patience is becoming more limited and it is more and more difficult to hide the way I really feel when I am frustrated and disagree with something.

"I can joke about the "difficulties" of having broken cups and no more gas, but there is always and will always be an underlying understanding that really, we have it good."

This is normal and happens every time I am in the last few weeks of a contract in the field. In just less than a month though, I should be back home, with my family, in time for Christmas and ready to recharge for wherever in the world MSF sends me.

In writing this post, and especially that last line, I am all too aware of how fortunate I am to be able to dip in and out of these places.

Yes, stress levels become high and frustrations are raised and there comes a time when you are ready to go back home and see your friends and family, and feel safe.

For people here in DRC though, the feeling of constant built-up stress and not being safe is a daily reality, and one they can't escape from so easily.

With this awareness of disparity comes feelings of guilt and anger. Anger that the world is so unequal, and guilt that I was somehow born into a country that is stable and where there are opportunities.

Sure, I can joke about the "difficulties" of having broken cups and no more gas, but there is always and will always be an underlying understanding that really, we have it good; at home and in the field.

find out more about our work in democratic republic of congo