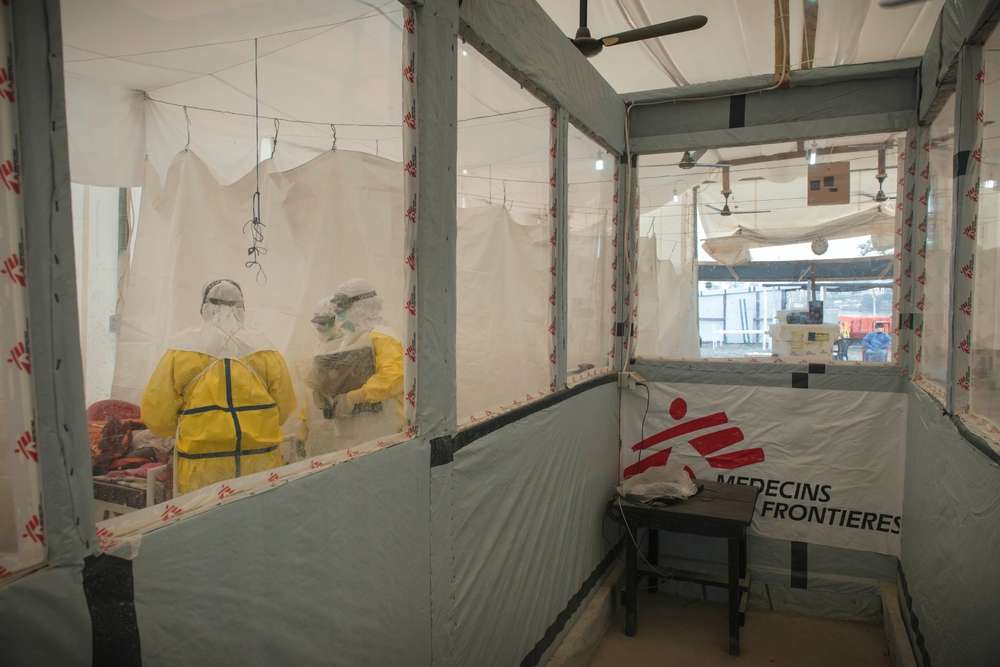 World leaders are failing to address the worst ever Ebola epidemic, and states with biological-disaster response capacity, including civilian and military medical capability, must immediately dispatch assets and personnel to West Africa, the international medical humanitarian organisation Médecins Sans Frontières/Doctors Without Borders (MSF) announced today in a special briefing at the United Nations organised by the office of the UN Secretary General and the World Health Organisation (WHO).

The further spread of the virus will not be prevented without a massive deployment of such specialised medical units to bolster epidemic control efforts in affected countries, said MSF.

In a speech delivered to UN member states, MSF International President Dr Joanne Liu denounced the lack of deployment of resources, which has to-date relied on overstretched ministries of health and private non-governmental organisations, to tackle the exceptionally large outbreak.

Despite repeated calls by MSF for a massive mobilisation on the ground, the international response has been lethally inadequate.

MSF medical teams have been battling the outbreak in West Africa since March. Non-governmental groups and the United Nations cannot alone implement the WHO Global Roadmap to fight the ever growing and unpredictable outbreak. Transmission rates have reached levels never before reported in past Ebola outbreaks.

“Six months into the worst Ebola epidemic in history, the world is losing the battle to contain it,” said Dr Liu.

“Leaders are failing to come to grips with this transnational threat. The WHO announcement on 8th August that epidemic constituted a ‘public health emergency of international concern’ has not led to decisive action, and states have essentially joined a global coalition of inaction,” she said.

Many countries possess biological threat response mechanisms. They can deploy trained civilian or military medical teams in a matter of days, in an organised fashion, and with a chain of command to assure high standards of safety and efficiency to support the affected countries.

MSF insists, however, that any military assets and personnel deployed to the region should not be used for quarantine, containment, or crowd control measures. Forced quarantines have only bred fear and unrest, rather than stem the virus.

Martin Zinggl/MSF
MSF teams are working around the clock to battle the Ebola outbreak in West Africa. Here, a member of staff is disinfected in our Foya centre in Liberia.

“Funding announcements and the deployment of a few experts do not suffice,” said Dr Liu.

“States with the required capacity have a political and humanitarian responsibility to come forward and offer a desperately needed, concrete response to the disaster unfolding in front of the world’s eyes,” said Dr Liu.

“Rather than limit their response to the potential arrival of an infected patient in their countries, they should take the unique opportunity to actually save lives where immediately needed, in West Africa.”

In Monrovia, Liberia, for example, new Ebola management centres with adequate isolation facilities and qualified staff are urgently needed. The queue of patients continues to increase in front of MSF’s ever growing ELWA 3 centre, which now contains 160 beds.

It is estimated that 800 additional beds are needed in Monrovia alone. The MSF team is overwhelmed and cannot offer more than palliative care.

“Every day we have to turn sick people away because we are too full”, said Stefan Liljegren, the MSF coordinator at ELWA 3. “I have had to tell ambulance drivers to call me before they arrive with patients, no matter how unwell they are, since we are often unable to admit them."

P.K. Lee/MSF
Nine-year-old Tike, together with his elder sister Miatta and younger brother Jina, are sent by ambulance to MSF's Ebola treatment centre in Kailahun, Sierra Loene. Both of their parents died from the virus.

Ebola bodies in the streets

MSF’s care centres in Liberia and Sierra Leone are overcrowded with suspected Ebola patients. People continue to become ill and are dying in their villages and communities. In Sierra Leone, highly infectious bodies are rotting in the streets.

A multiplication of high quality isolation facilities would allow for earlier referral and admission, leading to a significant impact on mortality. MSF teams have been able to save more lives when people infected with Ebola seek treatment as early as possible.

Increased isolation capacity will also relieve the affected countries’ health systems, some of which are on the verge of collapse. At least 150 health workers have died from Ebola; others are too afraid to go back to work.

Additionally, triage centres must be set up, systems for management of corpses must be increased, and hygiene items must be distributed at a mass scale, along with an increase of active surveillance capacities. Disinfection campaigns are needed, as well as health and hygiene promotion among the populations and within health facilities.

“The clock is ticking and Ebola is winning,” said Dr Liu. “The time for meetings and planning is over.  It is now time to act. Every day of inaction means more deaths and the slow collapse of societies.”

MSF began its Ebola intervention in West Africa in March 2014 and is now operating in Guinea, Liberia, Nigeria, and Sierra Leone. The organisation runs five Ebola case management centres with a total capacity of 480 beds.

Since March, MSF has admitted 2,077 people, of whom 1,038 tested positive for Ebola and 241 have recovered. MSF has deployed 156 international staff to the region and employs 1,700 nationally hired personnel.