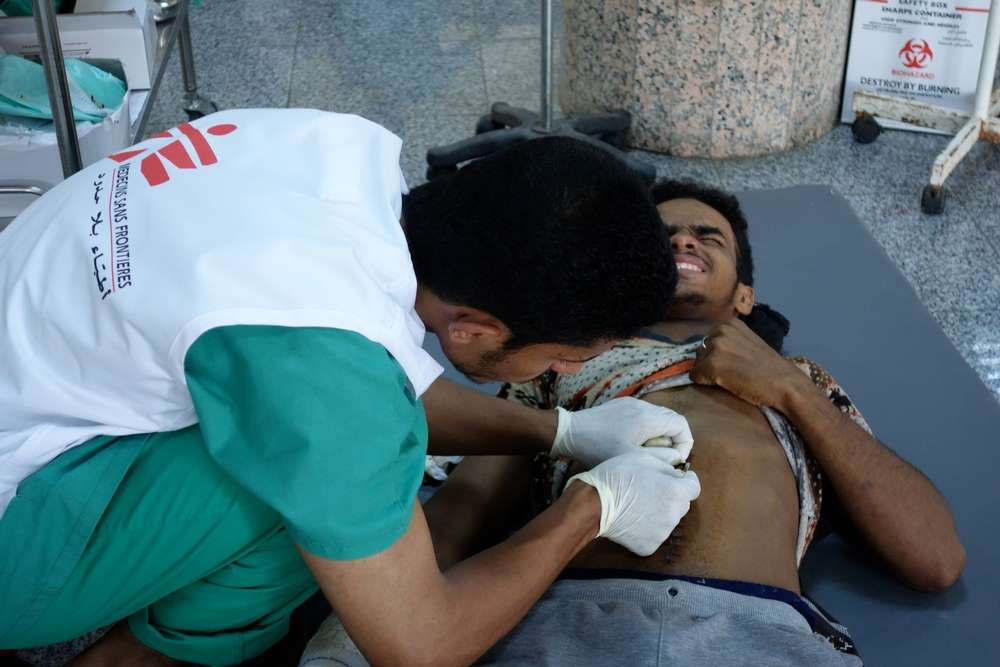 Yemen: MSF receives 100 injured in one day after shelling of residential areas in Aden

PRESS RELEASE: More than 100 injured people, including women and children, were received by MSF in Aden yesterday as a result of heavy shelling on the Al-Basateen residential area in the city.

More than 100 injured people, including women and children, were received by Médecins Sans Frontières/Doctors Without Borders (MSF) in Aden yesterday as a result of heavy shelling on the Al-Basateen residential area in the city.

The situation in the southern city is deteriorating with MSF teams unable to move around the city to provide healthcare to the injured, and many patients unable to access hospitals.

A patient inside our emergency surgical unit in Aden.

“In the last 36 hours we have received more than 130 injured, mostly from Al-Basateen after the residential area was shelled, including an attack on a funeral in the area,” said Thierry Goffeau, MSF’s project coordinator in Aden.

“Hospitals in Aden are full, some are placing mattresses in front of their front gates to accommodate patients.

We are independently running an Emergency Surgical Hospital within Al-Sadaqa Hospital compound in the Sheikh Othman district of Aden.

We are also supporting Crater Health Centre and holding outpatient surgical mobile clinics for patients who cannot access our hospital. But moving to different parts of the city is extremely difficult.

“Our teams have been blocked on many occasions from moving within the city and from receiving shipments of medical aid from the port,” said Goffeau.

“We need to be granted free access to be able to provide medical care to those who need it.”

A city under siege

Civilians in Aden are not only suffering due to the fighting, but also as a result of being cut off and surrounded by frontlines.

“There are shortages of food, cooking gas, fuel and drugs,” said Hassan Boucenine, MSF Head of Mission in Yemen.

“The health system is collapsing. Patients with chronic diseases cannot get their drugs, bodies are on the streets, and the city is an open dump with trash covering the streets.”

“It is extremely important to lift the blockade on food and medication and to set up unobstructed channels for air, sea and land access, to provide the population with what they need to survive,” said Boucenine.

This morning shells landed very close to the MSF hospital in Aden, and yesterday a shell landed within 30 metres of MSF staff while out in the city.

The MSF hospital has been subject to numerous bullets and shrapnel has landed in the hospital courtyard.

In Taiz, three shells landed last night in the proximity of a hospital supported by MSF, causing damage to parts of the hospital building.

Benoit Finck/MSF
A scene inside the operating theatre of our emergency surgical unit in Aden.

Other incidences of civilian casualties and damage to civilian structures have been registered recently as a result of airstrikes and shelling on densely populated areas in Sana’a, Hodeidah, Taiz, Saada, Amran, Ad-Dhale and elsewhere.

In Taiz, 57 wounded were treated yesterday at a hospital supported by MSF, including a six year old boy who sustained a head injury due to a shell that landed outside his home while he was playing.

Meanwhile, over the last week, the MSF team in Saada has received three waves of mass casualties, with 137 injured and 17 deaths upon arrival, including civilians.

“It is totally unacceptable that bombs from all sides of the conflict are directed at areas where there is a concentration of civilians,” said Boucenine.

“We call on all parties to respect the safety of civilians and the neutrality of medical facilities and personnel, and to allow the population unhindered access to medical assistance.

“We expect this to be given important consideration at the upcoming peace talks.”

MSF is an international medical neutral organization that provides healthcare in more than 70 countries according to medical ethics.

In Yemen, MSF works in Aden, Sana’a, Al-Dhale’, Amran, Sa’ada, Taiz and Hajja governorates. MSF is an independent organization that receives its funding from individuals around the world.