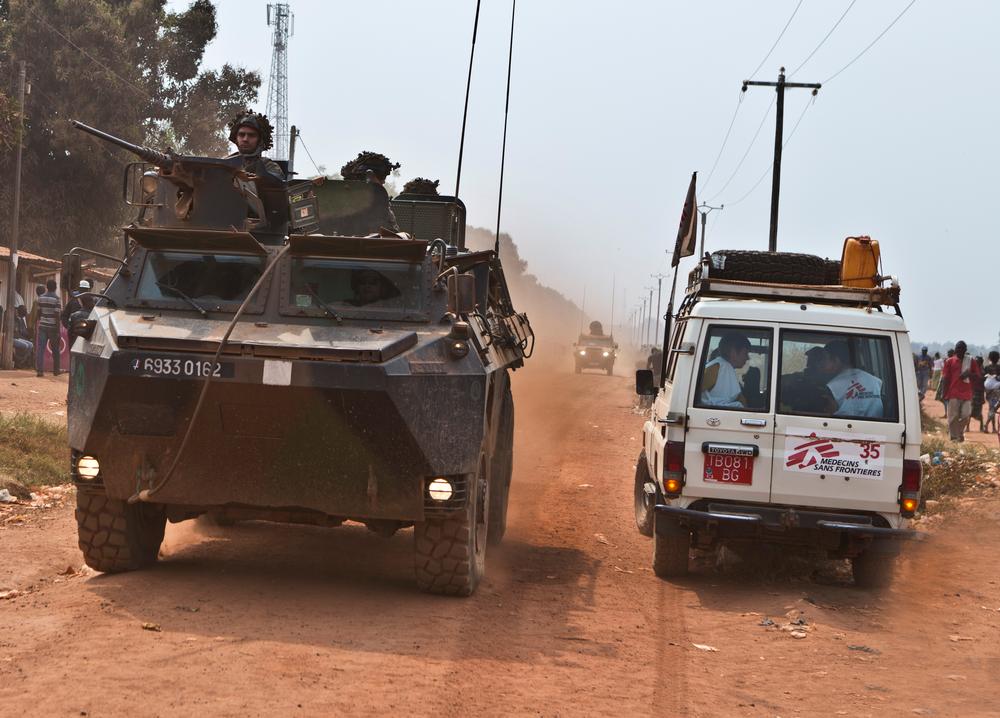 Opinion and debate: The aid world has failed the people of the Central African Republic

Opinion and debate: MSF General Director Arjan Hehenkamp on why the UN-led aid system has proved too too little too late for the people of CAR.

This article first appeared on theguardian.com on 11th December 2013

Thirty thousand people were sheltering in the Catholic mission in Bossangoa in the Central African Republic when I visited. They were terrified that they would be slaughtered in an attack. Suddenly they started to sing hymns, all together, and for hours on end the singing continued as the people invoked God's protection from assault.

I witnessed this immensely moving scene, so symbolic of the people's vulnerability, when I travelled to CAR to visit our MSF teams there four weeks ago.

At the time, I thought the situation in the country could not get worse. But events over the last few days have proved me wrong. Increasing levels of violence and chaos now grip the country, terrorising its citizens.

This crisis, characterised by unspeakable atrocities, affects nearly everyone and the climate of hatred, fear and revenge incited along religious lines is unprecedented.

The forced displacement of more than 10 percent of the country's population, increased incidence of disease and the collapse of even the most minimal public services have made life unbearable for millions of central Africans.

MSF does not speak out in favour of military interventions unless a situation is extreme, such as during the genocide in Rwanda.

This reluctance flows from not only from our humanitarian ideals but from our experience that violence usually begets violence.

In CAR, we did not initially join calls for a military intervention. Our teams were able to work across the country, even as most organisations, including the UN, withdrew to the capital, Bangui.

Yet most of us in MSF privately acknowledged that there was little capacity within the country for it to be able to help itself and we feared even more violence leading to severe humanitarian consequences.

So I welcomed the political courage and leadership shown by the EU's humanitarian aid commissioner, Kristalina Georgieva, the UN's emergency co-ordinator, Valerie Amos and the French government.

For even a superior military force requires a clearly defined strategy if it is to quell rather than fuel violence. And the use of force is no panacea for the persistent political and security crisis that has affected the country for decades.

The hope must be that a semblance of normality and security will allow the UN and the NGOs to scale up their humanitarian presence and work outside of Bangui.

Ever since the situation started to deteriorate in July, MSF has been frustrated by the lack of response by the wider humanitarian community.

Granted, UN and NGO staff had good reason to be cautious about their own security. Many had been affected by incidents and looting during the March 2013 coup, as was MSF.

At the same time, the gravity of the situation and the needs of the population should have compelled an earlier and more significant response. Instead, the humanitarian response to the widespread misery in CAR has failed those it should assist, a situation that continues even now.

There are honourable exceptions, among which I count my own organisation. But for the most part the international humanitarian response has been too little, too late.

“The UN must prevent similar failures”

For too long, the world has been indifferent to suffering in CAR, its people abandoned to a desperate fate.

Even if there is increased humanitarian activity in the coming weeks, the lack of responsiveness over the past months cannot be forgotten.

I am particularly disappointed in the UN. Amos, its emergency chief, showed foresight in visiting the country herself early on in the crisis, in July this year, and in October sent eight UN emergency directors to conduct a rare joint mission.

These visits were understood to represent clear commitments, yet the response of the UN and the NGOs associated with it has remained far below the standards expected and has not delivered the necessary lifesaving assistance over a prolonged period of time.

MSF fully accepts that there are limits to what humanitarian organisations can or should be willing to do.

We recently pulled out of Somalia as a result of repeated and targeted attacks over a longer period of time. But the Central African Republic is not Somalia.

Conditions in CAR were certainly difficult, yet humanitarian work was, and is, possible: not only has MSF kept an international staff presence through the worst of the crisis, it has actually expanded its presence in six of the most vulnerable areas of the country affected by violence.

As the international aid community, led by the UN, slowly begins to do its job for the people of CAR, we must recognise that it has badly failed so far.

If the UN-led aid system is to remain relevant, legitimate and capable of responding to humanitarian crises in the future, it must immediately improve what it does in the Central African Republic and simultaneously work hard to prevent similar failures elsewhere.

find out more about our work in central african republic