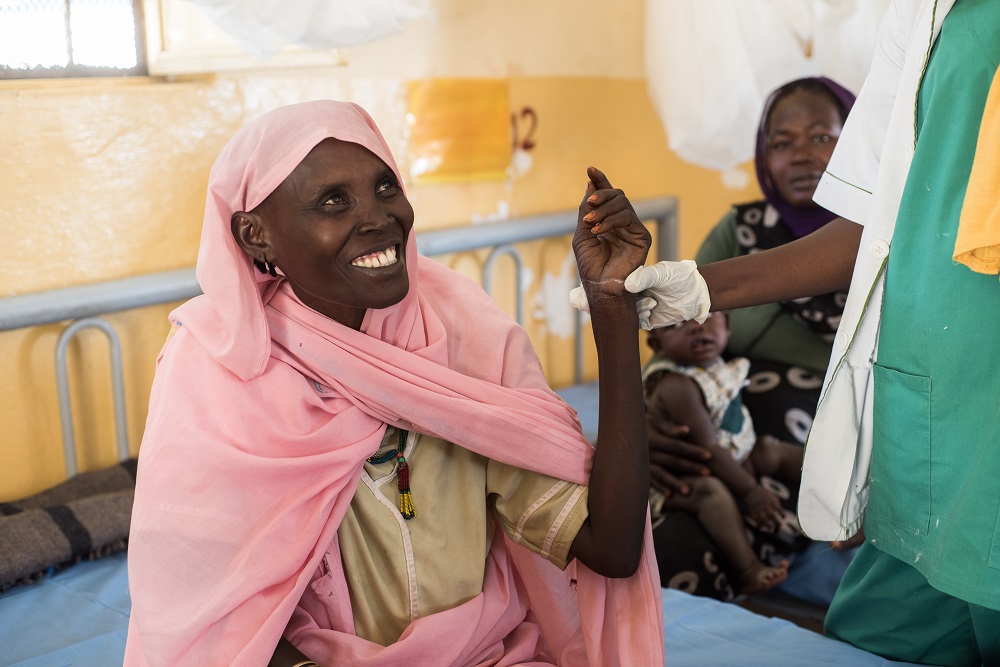 Sudan: Ten years of treating a “disease in hiding”

“After MSF opened the treatment centre in Tabarak Allah hospital in January 2010, we were receiving as many as 150 patients a day in the first month. Some had travelled 130 kilometres to get treatment for kala azar. There wasn’t enough space in the building, and we were forced to treat people outside under a tree. The patients were transferred to temporary shelters, until we eventually built a new ward. I was very surprised by this influx; my Sudanese colleagues weren’t quite so surprised. Gedaref was one of the regions in Sudan hardest hit by kala azar. In some villages, everyone was infected,” says former Médecins Sans Frontières‎/Doctors Without Borders (MSF) project coordinator Dr Dagemlidet Worku. Dr Worku managed the opening of the treatment centre in Tabarak Allah hospital in Gedaref state in 2010 during a major kala azar outbreak.

After the initial response to the outbreak in 2010, MSF built a treatment centre with three inpatient wards, which increased the hospital’s capacity to 100 beds. MSF set up a water distribution scheme and introduced daily water trucking, so that patients could have clean drinking water. We constructed and equipped a laboratory, a waste management area, a pharmacy, a laundry area for patients and their caretakers, and an isolation area for inpatients with contagious diseases. We also installed a generator to supply the hospital with electricity around the clock.

“When we started in 2010 the situation was very difficult. Since then MSF has treated almost 7,000 kala azar patients in Gedaref,” says MSF tropical medicine advisor Dr Gabriel Alcoba. “This might not seem like a large number, but each patient treated is one life saved (given its high mortality rate).

Sudan has one of the highest rates of kala azar (also known as visceral leishmaniasis) in East Africa. The region around Gedaref, 500 kilometres east of the capital, Khartoum, and close to the Ethiopia border, is the hardest hit part of Sudan.

Kala azar is a deadly tropical disease transmitted by sand-flies. Much of Gedaref state is dry savannah woodland with many Acacia and Balanite trees growing in the black cotton soil. This makes it the ideal environment for the tiny insects that transmit this disease. They take refuge in the cracks that form in the ground after the rainy season, or in tree trunks, and in the dried mud walls of houses. Kala azar is a well-known illness, familiar to many in Gedaref; almost everybody knows someone who has suffered from it.

In Sudan, as elsewhere, the worst effects of kala azar are seen in the poorest and most marginalised communities. Most people in Gedaref state are subsistence farmers or pastoralists with small herds living in remote villages with limited access to healthcare. Socio-economic inequalities are high, with the fertile land dominated by extensive farming corporations that cultivate sorghum, sesame and millet as major crops.

Kala azar especially affects people that have been weakened by malnutrition or that are already suffering from other diseases that weaken the immune system, such as HIV or TB. It is fatal if left untreated. Children under two years old and elderly people are more vulnerable because they already have lower immunity.

“Back in 2010, each patient required 30 days of hospitalisation and painful injections. Now, the treatment requires 17 days of hospitalisation. The mortality rate was high, but we have brought it down from around 10 per cent to one per cent. No combined drugs were available, available drugs were toxic, and testing for kala azar was much more complex. Much has improved since then. Better tests and treatments have been introduced globally and we also introduced them in our treatment centre. For example, in 2011, the newly approved drug therapy, with antimonials and paromomycine, reduced the length of kala azar treatment. Access to 2nd line infusions with ambisome further reduced mortality in fragile patients, including children, elderly and patients living with HIV. While safer and shorter than previously used medication, it still requires two painful daily injections and must be stored cold. This remains an obstacle to its use in rural clinics.” Dr Alcoba said.

Not everyone who comes into contact with kala azar develops the disease, but it can spread unseen unless everyone with a persistent fever and an enlarged spleen is tested at a health centre. The parasite infects organs, such as the liver, spleen and bone marrow, and depletes the patient’s immune system, leaving those infected vulnerable to other serious infections. It is almost always fatal if left untreated. There is now a rapid, inexpensive test to detect kala azar.

“The history of kala azar goes back a long time. People here see it as a very dangerous fever because it is so complicated to treat. Even more importantly diagnosing kala azar is seen as extremely difficult, beyond the long fever and swollen spleen, and access to treatment is only after a positive diagnostic test. Therefore, it is referred to as a disease that is in hiding. Other diseases, such as malaria, can be treated in any local healthcare centre, but kala azar requires hospitals or centres with specialised staff and lab services, and not many existed 10 years ago,” says Dr Alcoba.

To improve the treatment in the country MSF established a kala azar training centre and facilitated training for staff from the Ministry of Health (MoH) kala azar centres in other parts of Sudan. The training focused on diagnostics, treatment and nursing. MSF then signed a partnership with the Kala Azar Research Centre (KRC) at the University of Gedaref, under which we provided theoretical training for medical students and staff, as well as hands-on practical training in the hospital.

“We were able to share diagnostic tools with other health centres and provided training to local medical staff on performing a kala azar diagnostic test. This meant people did not have to travel for hours to get tested, helping to save more lives. At each of my visits to Tabarak Allah since 2014 I have seen clear progress in clinical management and in the diagnosis of the parasites,” says Dr Alcoba.

“Community healthcare workers from some of the worst affected villages told us that in the past kala azar was more common in their communities and that now there are far fewer people falling ill and fewer people dying. What helped with prevention efforts was the increase in health education and improving understanding about transmission, including the sand-fly and its habitats in certain trees or cracks,” says Maria Trivisonno, MSF medical team leader for the kala azar project in Gedaref.

Over the past six months MSF has gradually handed over kala azar medical activities in Tabarak Allah hospital to the MoH, including the laboratory services and has donated enough medical supplies to last the rest of the year. Our commitment has included years of capacity building and training of MoH staff from Gedaref and other regions in Sudan.

On occasion of the handover to the MoH and Tabarak Allah hospital, Maria Trivisonno said the following: “We have been able to save many lives. We reduced the burden of the disease and improved the access to and quality of treatment in Gedaref state. Between January 2010 and April 2020, we treated almost 7,000 patients and the cure rate stands at almost 100 per cent. It has been a joint achievement, working hand-in-hand with our partners of the Ministry of Health and the Tabarak Allah hospital towards a common goal of controlling kala azar in Sudan. We are confident that our partners will ensure the continuity of this successful programme and allocate the necessary resources and healthcare staff.”

Around the world, MSF has spearheaded kala azar treatment, diagnosis and research for more than two decades. This has led to substantial advances in access to treatment and innovations. We continue to advocate for simplified diagnostics and treatment regimes, with improved drug safety and efficacy.

There is still a long way to go to control and eliminate this deadly disease in Sudan primarily affecting the poorest and most marginalised, who represent an unattractive market for drug companies. They see no profit to put research and development efforts into combatting kala azar.

Diagnosing kala azar remains difficult and treatment is still complex and painful, requiring hospital and laboratory infrastructure and trained staff. Rapid diagnostics, like that used with malaria, and oral medicines could change the lives of hundreds of thousands of people in Gedaref and other parts of the world where this neglected disease continues to silently kill tens of thousands of people each year.

As an emergency medical organisation, MSF is continuously adapting to address the most acute humanitarian and health needs in an impartial manner and in the best possible way possible. As we have in the past, in Gedaref state we responded to outbreaks of malnutrition and measles, and most recently 2019 to a cholera outbreak.

Since the first cases of COVID-19 were confirmed in Sudan, MSF has supported the MoH to help reduce the spread of the disease. We remain committed to assisting the people of Gedaref by supporting the response against COVID-19. Our teams are currently deployed in Gedaref City to strengthen infection prevention and control, water, and sanitation and hygiene measures. They are providing training, incentives and technical support to the health authorities. COVID-19 can be especially severe in kala azar patients because of their weakened immune systems and they will need to be particularly protected and tested early.