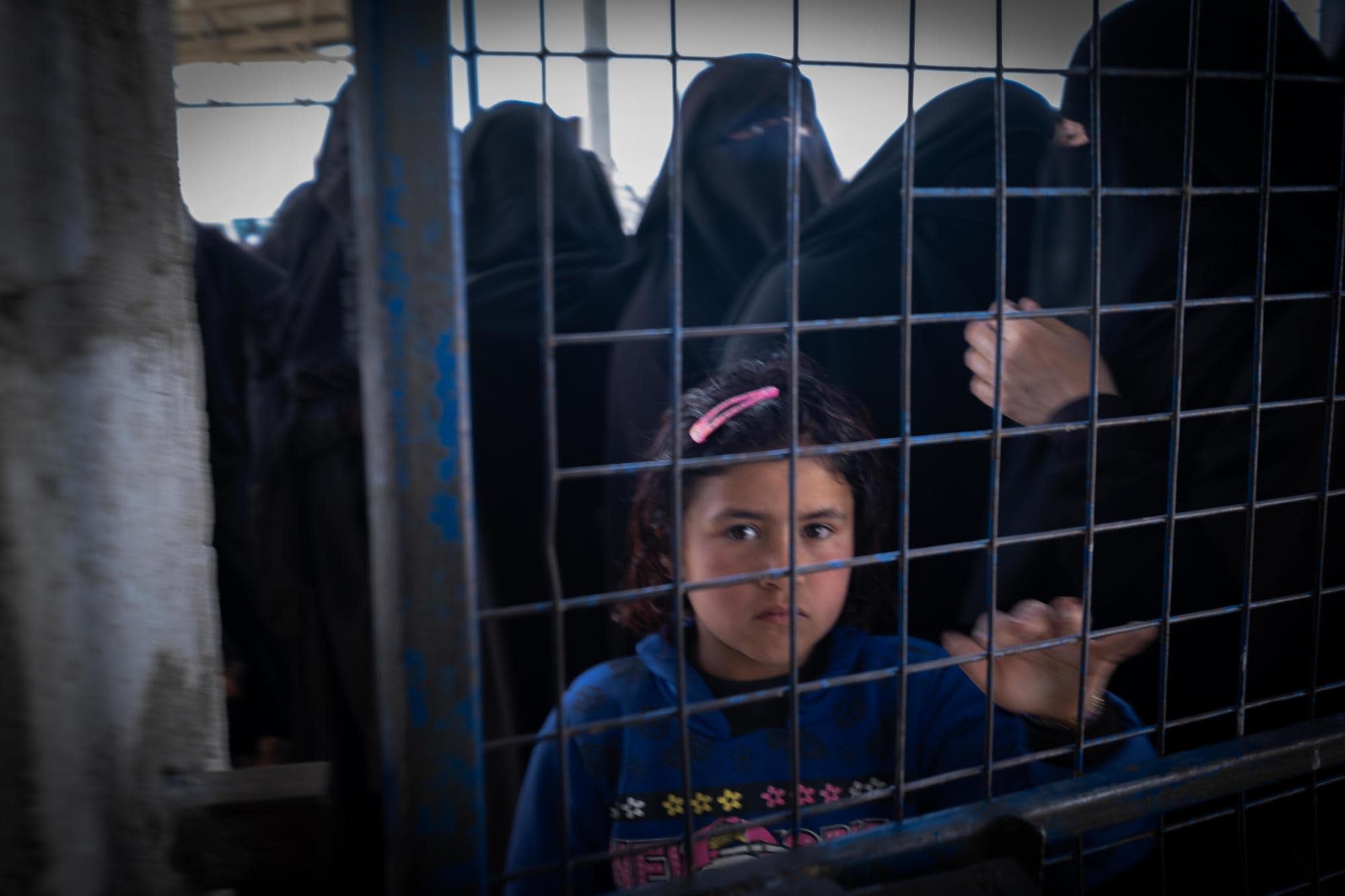 Northeast Syria: In Al-Hol camp, almost no healthcare is available

As numbers of patients with COVID-19 grow in northeast Syria, the pandemic is having a knock-on impact on other health services in a region where some 700,000 people are displaced from their homes. MSF emergency manager for Syria Will Turner describes the situation across the region and in Al-Hol camp for displaced people, where more than 65,000 people, mostly women and children, have been held for nearly two years, since Syrian Democratic Forces took control of the last remaining territory in Syria of the Islamic State group.

What is happening in northeast Syria right now?

The whole region has been impacted by the onset of the pandemic. More than 700,000 people are displaced from their homes across northeast Syria, most of them almost entirely dependent on humanitarian assistance. They are spread across Raqqa, Hassakeh and Deir ez-Zor provinces, as well as around the town of Kobanê/Ayn Al-Arab in eastern Aleppo province.

Many of the displaced people live in overcrowded environments, including official camps, informal camps and makeshift settlements in schools and marketplaces. Tens of thousands more are living in the homes of local residents.

Like much of Syria, this area has been devastated by more than nine years of conflict. The most recent insecurity was in October 2019, when a Turkish-backed military operation took place in the north. The fighting led to renewed displacement and further shattered the region’s fragile infrastructure. In addition, much needed humanitarian aid was withdrawn. MSF had to reduce activities for several months. Today, many health facilities no longer function and those that remain open struggle to respond to people’s needs.

What is the current situation with water supply?

There is currently a huge crisis with water. Al-Halouk water station provides water for an estimated 480,000 people in Hassakeh province, including Al-Hol and other camps for displaced people. It was seriously damaged in October last year, cutting off the water supply to the entire region. Although it has since been fixed, water supply has been disconnected and disrupted, throughout 2020. Widespread shortages over the past two weeks have led to protests and unrest.

We cannot access Al-Halouk at this time, so we are supporting the local authorities with a recently set up water station called Al-Himme, north of Hassakeh city. We are donating laboratory equipment and chemicals needed to treat water so that it can be made safe to drink and distributed. When fully operational it is estimated that Al-Himme can supply a maximum of 30 per cent of the water needs for the area.

We are worried that there could be severe public health implications. Access to clean water is essential in any emergency situation; water shortages could spell disaster in the face of COVID-19.

What is happening with COVID-19?

There’s no question that we are seeing increases in COVID-19 cases across northeast Syria. As of 24 August, there were 394 confirmed cases – nearly a fifth among health workers. Testing is limited, but of those tests carried out, around half return a positive result. This suggests that transmission rates are high and that much more testing is needed.

From what we know, the cities of Hassakeh and Qamishli are the current hotspots. We are worried that this may soon shift to the city of Raqqa, another densely populated area hosting large numbers of displaced people, and still recovering from the destruction of war. Health services are scarce, and access to water and sanitation is poor.

There are limited hospital beds available for isolation or intensive care in the region. As COVID-19 spreads, various local government and humanitarian agencies have plans to make more beds available in different locations.

Working with the Kurdish Red Crescent, MSF is supporting the only dedicated COVID-19 hospital in northeast Syria, on the outskirts of Hassakeh city, which also has some intensive care capacity. As part of the COVID-19 humanitarian taskforce, chaired by the local health authorities, we have also provided training across the region and helped renovate a 48-bed isolation ward in Hassakeh National Hospital, the largest general hospital in the region.

Can you describe Al-Hol camp?

Al-Hol camp, in Hassakeh province, close to the border with Iraq, is the largest camp in northeast Syria. Today, some 65,400 people are being held there – most of them since the final battles between the Islamic State (IS) group and Syrian Democratic Forces in early 2019. More than 90 per cent of the camp’s residents are women and children; two-thirds are under the age of 18.

Al-Hol is a ‘closed camp’, meaning that people cannot move freely in and out. Surrounded by barbed wire fences, the camp is highly secure, its entrances heavily guarded by security forces. The camp is massively overcrowded, with an average of seven people squeezed into modest-sized tents; in some places multiple families are crammed into communal spaces.

Restrictions on people’s movements, already strict before COVID-19, have been further tightened as a result of the pandemic. For many people it is impossible to leave the camp, even for short periods of time.

Most of the camp’s inhabitants, those of Syrian or Iraqi origin, live in the main camp. Then there is the ‘Annex’. In this separate and even more highly secured area, nearly 10,000 ‘third-country’ nationals languish, almost entirely neglected by the world. Some governments and humanitarian agencies have been reluctant to provide services in the Annex because of the perceived affiliations of those who are held there.
What healthcare is available in Al-Hol camp?

At the moment, there is almost no healthcare available as many health facilities have closed as a result of the knock-on effects of COVID-19. The consequences are devastating. In just one week in August, seven children died, all under the age of five. We heard horrific reports of their mothers going from clinic to clinic in a desperate search for somewhere that was open.

In May, there were 24 primary healthcare clinics in the camp; by early August there were just 15.

At present, just five of these clinics are operational, including MSF’s clinic in the Annex. Since we were able to reopen it in late July, we have seen more than 1,000 patients.

Across the camp we also run a tent-based wound care programme for people who cannot reach clinics. There are three field hospitals, but none are currently fully functional. Until last week there was no emergency medical care available in the main camp. Thankfully, some limited services have been able to restart. But it’s not clear how long this can be sustained, given the high rates of infection among health staff.

Referrals for more critical cases are possible, but these can be complicated and can take a long time to organise. And as COVID-19 impacts healthcare across the region, the options for referral are likely to reduce.

There is an ongoing outbreak of diarrhoea, young children are particularly vulnerable. Many become malnourished as a result. In our therapeutic feeding centres, nearly 80 per cent of our patients under the age of five have acute watery diarrhoea. Admissions to our inpatient therapeutic feeding centre increased 71 per cent in July, in addition we saw 157 children with malnutrition as outpatients.

Clean water and hygiene are absolute priorities, all the more so in the blazing summer heat. In July, we delivered 15.2 million litres of chlorinated water and treated a further 69.3 million litres for others to distribute.
What is the impact of COVID-19 on health workers?

We are particularly worried about the high rate of infection among health workers. First, of course, is the impact on them and their families. Then we see a knock-on impact on an already extremely fragile health system. Not only can these staff not work, but other staff who were in contact with them also need to be quarantined. The result is that health facilities with already limited services have often had to close completely. In some places health workers report being too scared to go to work.

Until recently, most health workers worked in multiple different facilities across northeast Syria. Of those health staff who have tested positive for COVID-19, most had previously worked across public health services and with humanitarian agencies, including in clinics in camps such as Al-Hol. In response to increased infection rates, local authorities have introduced new regulations prohibiting staff from working in more than one health centre.

Is there a risk of a COVID-19 outbreak in Al-Hol?

We have just heard about the first confirmed case of COVID-19 among Al-Hol residents. We are worried about what will happen next.

Al-Hol camp is not well prepared for an outbreak of COVID-19. An isolation facility has been built but it isn’t ready for use. It doesn’t have enough trained staff, and it lacks basic water and hygiene infrastructure and adequate infection prevention and control measures. There are also problems with medicines and medical equipment, including oxygen support. It is hardly surprising that, when people with suspected COVID-19 were identified in the camp, they were reluctant to go there.

Our teams have identified 1,900 people across the camp who will be particularly vulnerable to COVID-19, many of whom have non-communicable diseases, such as diabetes, hypertension, asthma or heart conditions. We are doing everything we can to provide them with the medicines they need, as well as with soap and other essential items. This is especially important as they can’t go out to buy them themselves.

MSF has been working to provide targeted health awareness messages about how to stop COVID 19 from spreading, but it is challenging to ask people living so closely packed together to take impossible measures – such as physical distancing.

Should there be more humanitarian assistance?

Yes. This requires a collective effort. As MSF we are trying to meet as many of people’s needs as we can and to support the work of other organisations. But, far more attention and commitments are needed; areas such as the Annex have all but been abandoned by the world. Regardless of people’s perceived affiliations, access to medical and humanitarian assistance are basic rights.

As well as our work in Al-Hol and the broader COVID-19 response in northeast Syria, we continue to support free access to primary and secondary healthcare in Raqqa and vaccination activities in Kobane/Ayn Al-Arab. We also continue to assess the health and humanitarian needs of people living in remote, socially or economically excluded areas, informal settlements and other camps.