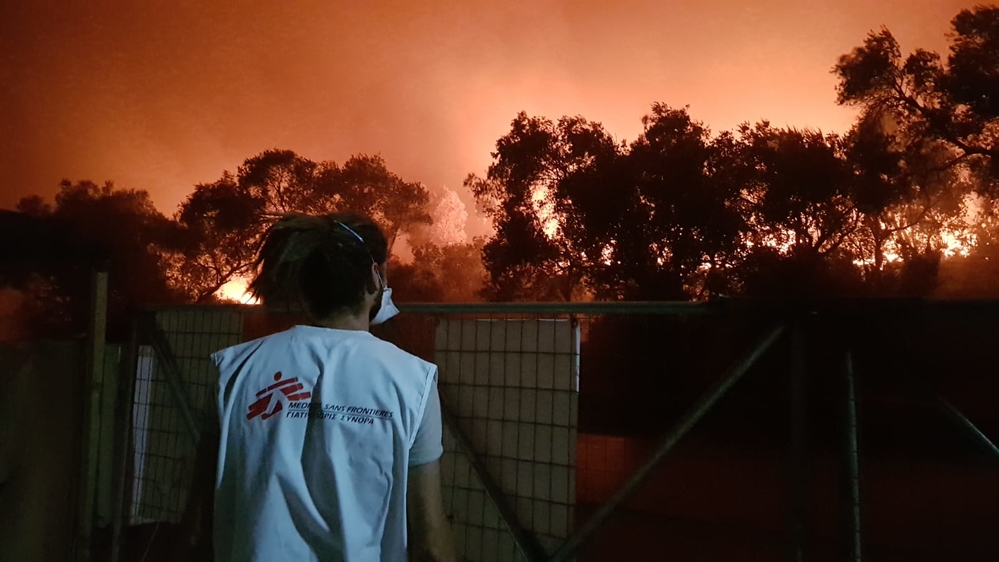 Greece: All people in Moria camp must be evacuated to safety in wake of destructive fire

Nearly 12,000 men, women and children have been forced to evacuate Moria refugee camp, on the island of Lesbos, Greece, after a fire tore through the camp during the night of 8 September. While the fire is not believed to have caused any deaths, the camp was almost completely burned down, and people are now on the streets, with nowhere to stay. Médecins Sans Frontières (MSF) urges Greek and EU authorities to immediately evacuate people off the island to safety.

“Our teams saw the fire spread across Moria and rage all night long. The whole place was engulfed in flames, we saw an exodus of people from a burning hell with no direction,” says Marco Sandrone, MSF field coordinator in Lesbos. “Children were scared, and parents are in shock. We are relieved that there seem to be no victims and we are working now to address the immediate needs of the people.”

All medical services available for the refugees and asylum seekers have been interrupted, including services at the MSF paediatric clinic.

Almost five years of trapping people in dire conditions has led to tensions and despair. This has only increased over the last five months due to restricted movements in the camp, hastily justified as a public health measure amidst the COVID-19 pandemic. Following the recent confirmation of positive cases of COVID-19 among the camp’s residents, the increasing restrictions on people have made the situation unbearable.

MSF has been pushing the Greek health and migration authorities to set up an adequate COVID-19 response plan for Moria, that counts on people’s collaboration and which offers dignity to the sick and to those who are infectious.

“The Greek authorities have failed to put such a response in place, and the EU and other EU member states have disclaimed responsibility and have done close to nothing to resolve this situation,” says Aurelie Ponthieu, MSF Humanitarian Advisor on Displacement. “The years-long orchestration of human suffering and violence produced by European and Greek migration policies are to blame for the fire, and we can only hope that the same system of inhumane containment will not be reborn from the ashes in Moria.”

MSF calls on the Greek authorities to immediately adopt an emergency response plan and to evacuate all these people to a safe place on the mainland or to other European countries. We are ready to provide the support that is needed during the emergency response.