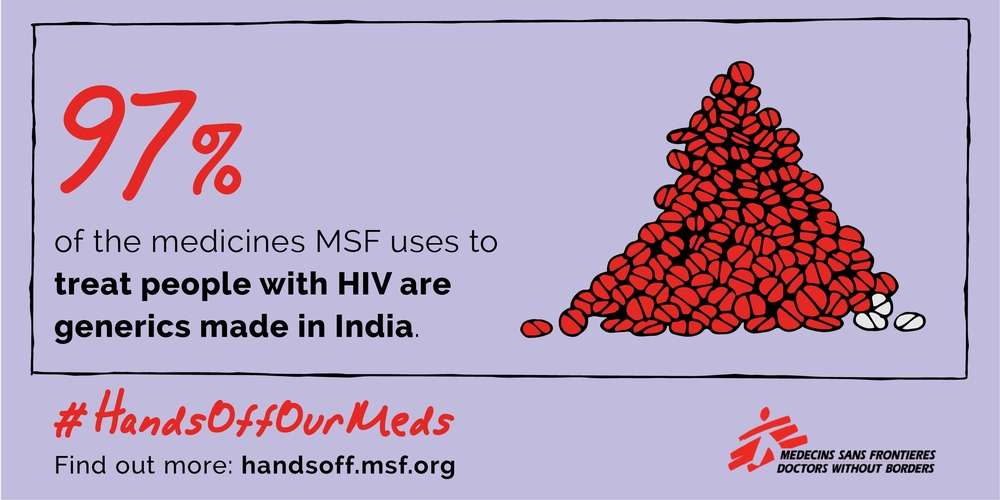 PRESS RELEASE: This morning, protestors from MSF and people living with HIV marched in New Delhi, urging India not to cave into the EU's demands to accept provisions that would harm access to medicines and demanding the EU to keep their 'Hands off our medicines'!

PRESS RELEASE: This morning, protestors from MSF and people living with HIV marched in New Delhi, urging India not to cave into the EU's demands to accept provisions that would harm access to medicines and demanding the EU to keep their 'Hands off our medicines'!

Pressure is mounting on India to quickly sign off on a free trade agreement which still contains provisions that will harm people’s access to medicines in India and across the developing world, the Delhi Network of Positive People (DNP) and the international medical humanitarian organisation Médecins Sans Frontières/Doctors Without Borders (MSF) warned today.

Representatives of the groups protested today outside the European Commission India headquarters in Delhi, demanding the harmful provisions be removed.

“The EU cannot claim it supports access to medicines and is concerned about the lives of patients in developing countries, and in the same breath be pushing harsh provisions around intellectual property enforcement on India,” said Loon Gangte of DNP .

“What the EU wants in this trade deal will pose a huge threat to future access to affordable generic medicines, including the drugs I need for HIV.

As the negotiations have progressed in recent months, certain provisions damaging to access to medicines have been removed from the proposed deal, including, for example, attempts to extend the duration of patents. However, the intellectual property (IP) enforcement and investment provisions are still seriously concerning, particularly as an early April deadline to sign the agreement draws ever nearer.

Enforcement provisions could potentially block the export of generic medicines from India – a lifeline for millions of people across the developing world. By allowing medicines to be delayed, seized, detained and destroyed, enforcement provisions would open the door to abusive practices from multinational corporations.

They could also draw in third parties, including suppliers of active pharmaceutical ingredients used to produce generic medicines and treatment providers like MSF, potentially embroiling them in court cases simply for buying or distributing generic medicines.

Measures on investment could see the Indian government sued by multinational companies for billions of dollars in private arbitration panels if national laws, policies, court decisions or other actions are perceived to interfere with their investments – for example, if an Indian patent office rejects or overrides a patent on a medicine to increase access.

IP and investment measures are deemed concerning enough for an Indian Parliamentary Standing Committee to have decided to examine the impact of free trade agreements on access to medicines. Worryingly, Indian negotiators may chose to concede, hastily conclude the talks and rush signing the agreement – which will become binding and set a precedent for future trade agreements – before the parliamentary review and recommendations are concluded.

“India should not rashly sign this agreement before the parliament Standing Committee on Commerce has the opportunity to examine the impact of trade deals on access to medicines”, said Leena Menghaney, Manager for MSF’s Access Campaign in India. “MSF appeals to the Indian government – don’t accept the provisions that will impact so many lives before you sign on the dotted line.”

“We have to switch more and more people in our project in Mumbai to new HIV drugs like raltegravir; but prices are too high at US$1,775 per person for just one drug in the cocktail of three that people need”, said Menghaney. “India should work to ensure the safe haven for production of affordable generic medicines remains as secure as possible, and that means rejecting harmful provisions in the trade deal.”