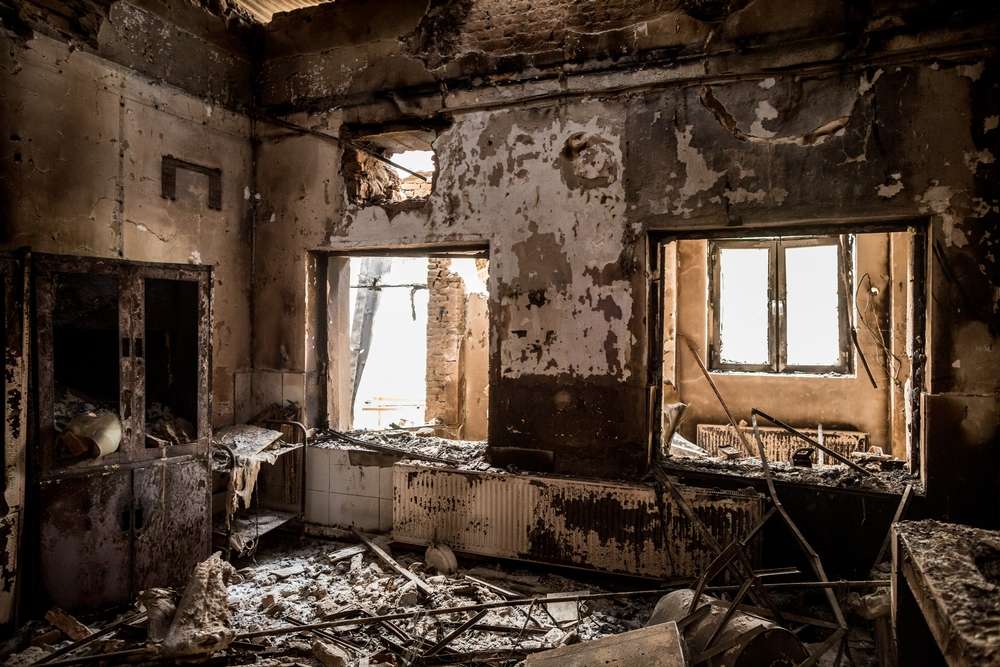 Twelve staff are confirmed dead and more than 30 are unaccounted for after our trauma centre in Kunduz, Afghanistan, was hit several times during sustained bombing.

Twelve MSF staff are confirmed killed as well as 10 patients, including three children.

“Under the clear presumption that a war crime has been committed, MSF demands that a full and transparent investigation into the event be conducted by an independent international body. Relying only on an internal investigation by a party to the conflict would be wholly insufficient.

"Not a single member of our staff reported any fighting inside the MSF hospital compound prior to the US airstrike on Saturday morning. The hospital was full of MSF staff, patients and their caretakers. It is 12 MSF staff members and ten patients, including three children, who were killed in the attack.

"We reiterate that the main hospital building, where medical personnel were caring for patients, was repeatedly and very precisely hit during each aerial raid, while the rest of the compound was left mostly untouched. We condemn this attack, which constitutes a grave violation of International Humanitarian Law.”

This attack constitutes a grave violation of International Humanitarian Law.

All indications currently point to the bombing being carried out by international Coalition forces. MSF demands a full and transparent account from the Coalition regarding its aerial bombing activities over Kunduz on Saturday morning

MSF condemns in the strongest possible terms the horrific bombing of its hospital in Kunduz full of staff and patients.

MSF wishes to clarify that all parties to the conflict, including in Kabul and Washington, were clearly informed of the precise location (GPS Coordinates) of the MSF facilities - hospital, guesthouse, office and an outreach stabilization unit in Chardara (to the north-west of Kunduz).

As MSF does in all conflict contexts, these precise locations were communicated to all parties on multiple occasions over the past months, including most recently on 29 September.

The bombing continued for more than 30 minutes after American and Afghan military officials in Kabul and Washington were first informed. MSF urgently seeks clarity on exactly what took place and how this terrible event could have happened.

It is with deep sadness that we confirm so far the death of nine MSF staff during the bombing last night of MSF’s hospital in Kunduz.

Latest update is that 37 people were seriously wounded during the bombing, of whom 19 are MSF staff.

Some of the most critically injured are being transferred for stabilisation to a hospital in Puli Khumri, two hours’ drive away. There are many patients and staff who remain unaccounted for. The numbers keep growing as we develop a clearer picture of the aftermath of this horrific bombing.

Three staff are confirmed dead and more than 30 are unaccounted for after the Médecins Sans Frontières/Doctors Without Borders’ (MSF) trauma centre in Kunduz, Afghanistan, was hit several times and badly damaged during sustained bombing at 2.10am on Saturday 3 October.

Our medical team is working around the clock to do everything possible for the safety of patients and hospital staff.

“We are deeply shocked by the attack, the killing of our staff and patients and the heavy toll it has inflicted on healthcare in Kunduz,” says Bart Janssens, our Director of Operations.

“We do not yet have the final casualty figures, but our medical team are providing first aid and treating the injured patients and MSF personnel and accounting for the deceased. We urge all parties to respect the safety of health facilities and staff.”

Since fighting broke out on Monday, our staff have treated 394 wounded. When the aerial attack occurred this morning we had 105 patients and their care-takers in the hospital and over 80 MSF international and national staff present.

Our hospital is the only facility of its kind in the whole north-eastern region of Afghanistan, providing free life- and limb-saving trauma care.

MSF doctors treat all people according to their medical needs and do not make distinctions based on a patient’s ethnicity, religious beliefs or political affiliation.

Surgery in the aftermath of the Kunduz hospital attack

MSF started working in Afghanistan in 1980. In Kunduz, just like in the rest of Afghanistan, both national and international staff work together to ensure the best quality of treatment.

MSF supports the Ministry of Public Health in Ahmad Shah Baba hospital in eastern Kabul, Dasht-e-Barchi maternity in western Kabul and Boost hospital in Lashkar Gah, Helmand province. In Khost, in the east of the country, MSF operates a maternity hospital.

Find out more about our work in Afghanistan